A Revival of Orthodox Christianity in Ukraine

Patriarch of Moscow and All Russia Kirill, who was staying in Kiev earlier this week, thanked the Ukrainian clergy for efforts made to maintain unity in the Church. He also praised the Ukrainian branch of the Orthodox Church for its contribution into the revival of Orthodox Christianity in the republic in the past two decades. 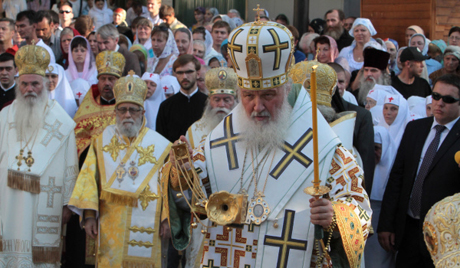 “Twenty years of Metropolitan Vladimir`s service as the “Metropolitan of Kiev and all Ukraine” were full of landmark initiatives. Today, when we, Orthodox Christians, mark this anniversary, we praise these years for what has been done to help Ukraine stay spiritually strong and guide its believers to salvation.”

The current head of the Ukrainian Orthodox Church was enthroned as the “Metropolitan of Kiev and all Ukraine” in 1992 at the Council of Ukrainian Archbishops in Kharkov. The Council was held amid a danger of schism, when the then head of the UOC Filaret Denisenko wanted to separate from the Russian Orthodox Church and form an autocephalous Ukrainian church. The only chance to prevent this from happening was to dismiss Denisenko and elect Vladimir Sabodan as the new head of the UOC. Opposing his dismissal, Denisenko, supported y some state officials, founded the alternative Ukrainian Orthodox Church under the Kiev Patriarchate and declared himself its leader. Those were fearful years full of struggle and spiritual decline, says churchgoer Olga…

“The 1990s in western Ukraine were terrible years. People were thrown out of churches, priests were beaten. One priest cried as he was telling me about those things. Those who supported the Moscow Patriarchate were constantly persecuted. It was horrible.”

Although today Ukraine has three institutions of the Orthodox Church only one of them – the Ukrainian Orthodox Church under the Moscow Patriarchate – is officially recognized as a canonical institution. Some people in Ukraine attribute it to the fact that the new authorities no longer provide moral and financial support to Old Believers (schismatics) and the Old believers do not have incentive to continue their activities.

Others believe that frequent visits of Patriarch of Moscow and all Russia Kirill to the republic and the efforts of the Ukrainian Orthodox church, which was striving for the unity with Moscow, were much stronger than the illusionary idea of the “free and independent” church. Metropolitan Vladimir of Kiev and All Ukraine who turned 76 years last November is confident that it was God who saved the Ukrainian Orthodox Church from schism.

“The principles of the spiritual world are different from the principles of the secular world. In spiritual world the prominence is achieved only by defeat while everyday life victories are achieved by self-destruction. Original sin has weakened the nature of humans not for good but until a certain time. The Sin is fighting Light and Good. As great writer Dostoyevsky said “God and the devil are fighting there and the battlefield is the heart of man”. The heart of man should take the top which belongs to it. The human goal in this life is to know God, to become closer to God and finally to unify with Him, not necessarily in the coming century, of course.”

At present the Ukrainian Orthodox Church under the Moscow Patriarchate unites 46 eparchies, which comprise more than 12,000 parishes and more than 200 monasteries. Naturally, it is too early to speak about the complete overcoming of the schism. It will take several decades to cure the wounds. But a lot has been done. Salvation is where the fullness of the Orthodox Christianity is and where people who praised God in different language gather around one throne, Patriarch Kirill concluded.