A School Restored by Religious Communities of Russia opens in Damascus 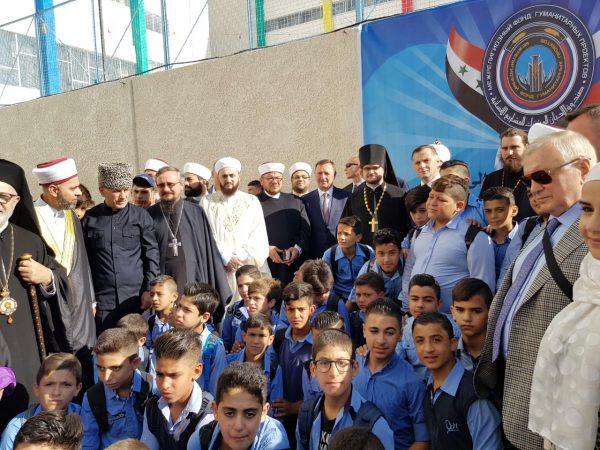 On 23rd September 2019, an official opening of a five-storey general education school for 1200 pupils took place in the Barzeh neighbourhood in Damascus. The school was destroyed during the war in Syria and restored through the efforts of the Interreligious Working Group for the Aid to the Population of Syria of the Council for Cooperation with Religious Associations under the President of Russia.

The school is located in Damascus’s populous district which became a target during the hostilities and suffered considerable damage. The eastern part of the Barzeh neighbourhood was controlled by terrorists for a long time, and the children from that area were subjected to ideological indoctrination at the terrorists’ special facilities. The children from the western part of the neighbourhood were eyewitnesses to all the horrors of war and violence and suffered major psychological traumas. With the school restored, all the children now have an opportunity to receive proper education. The opened educational institution consists of two parts – elementary and secondary schools – with a total area of six thousand square metres.

To take part in the official opening ceremony, a delegation of the Working Group for the Aid to the Population of Syria visited Damascus. With the blessing of His Holiness Patriarch Kirill of Moscow and All Russia, the Working Group is headed by Hieromonk Stefan (Igumnov), secretary for inter-Christian relations of the Moscow Patriarchate’s Department for External Church Relations. The delegation visiting Syria also includes Mr. S.A. Melnikov, executive secretary of the Council for Cooperation with Religious Associations under the President of Russia; Mufti Kamil Samigullin, head of the Muslim Spiritual Board of the Republic of Tatarstan; Imam Muhtasib Ildar Ziganshin of the Tumen Region, a member of the Presidium of the Central Muslim Spiritual Board of Russia; Mufti Albir Krganov, chairman of the Spiritual Assembly of Muslims of Russia; Mufti Askarby Kardanov, chairman of the Muslim Spiritual Board of the Republic of Adygea and the Krasnodar Krai; Pastor O.Yu. Goncharov, first deputy chairman of the Euro-Asia Division of the General Conference of the Seventh-day Adventist church; Bishop D.D. Shatrov of St. Petersburg and the Leningrad Region of the Associated Russian Union of Christians of Evangelical Faith; Hieromonk Yermogen (Korchukov), executive director of the Interreligious Foundation for Implementation of Joint Humanitarian Projects, oikonomos of the Zaikonospassky Monastery in Moscow; Mr. Jean-François Thiry, representative of the Conference of the Catholic Bishops of Russia; Imam Muhtasib Salikh Ibragimov of the Nizhnekamsk District of the Republic of Tatarstan; Imam Muhtasib I. Shalakhov of the Central Mosque in Maykop; Imam M. Mirsayapov, head of the International Department of the Spiritual Assembly of Muslims of Russia; Mr. O.V. Shabunevich, acting head of the Moscow office of the Imperial Orthodox Palestine Society; Mr. Hassan Nasralla, chairman of the Arab Diaspora Regional Non-Governmental Organization; Mr. O.I. Fomin, president of the “RUSSAR” Charity Foundation; and representatives the “Combat Brotherhood” All-Russian Organization of Veterans, Ms. N.A. Kuskova and Mr. M. Mutavvadzh.

Among those who attended the ceremony were also Mr. Alexander Yefimov, Ambassador Extraordinary and Plenipotentiary of the Russian Federation to the Syrian Arab Republic; Hegumen Arseniy (Sokolov), representative of the Patriarch of Moscow and All Russia to the Patriarch of Antioch and All the East; hierarchs and clerics of the Christian Churches in Syria; heads and representatives of the local Muslim communities; leadership of the Ministry of Education of the Syrian Arab Republic and of the governing authorities of Damascus; as well as teachers and pupils of the school and residents of the Barzeh neighbourhood.

The Working Group was established in 2017 by the Council for Cooperation with Religious Associations under the President of the Russian Federation. It consists of representatives of the major Christian and Muslim communities of Russia.

Since 2017 the Interreligious Working Group has implemented several successful humanitarian projects. In June and August 2017 two aircrafts with humanitarian aid were sent to Syria. In 2018 over 77 tonnes of high-quality foodstuffs were delivered to Syria and Lebanon and distributed among the needy Syrian families. In November 2018 the Working Group brought humanitarian aid to a boarding school for children of fallen Syrian servicemen in Damascus. In late March 2019, a thousand boxes containing high-quality humanitarian aid (some 15 tonnes) were delivered to Damascus and distributed through the religious communities.

All its humanitarian actions the Interreligious Working Group carries out together with the Syrian religious leaders and representatives of the local authorities. To coordinate joint efforts, the Working Group organizes high-level consultations and interfaith round tables on a regular basis. Such activities of the religious communities of Russia make substantial contribution to the improvement of humanitarian situation in Syria, helping its citizens return to normal life.

In November 2018, during a visit to Damascus of the interreligious delegation from Russia led by Metropolitan Hilarion of Volokolamsk, the Syrian Christian and Muslim leaders appealed to the Interreligious Working Group with a request to render assistance in restoring social infrastructure in the war-torn country, first of all, in repairing schools. In March 2019, during one of the visits to Damascus, the members of the Working Group, at the request of the Syrian side, inspected a general education school for 1200 children in the Barzeh neighbourhood, which suffered serious damage during the hostilities, and launched a restoration project. The funds for the repair works were collected by the religious communities of Russia. A considerable contribution was made by His Holiness Patriarch Kirill of Moscow and All Russia personally. All restoration works were completed by September 2019.

The school was cleared of the debris, its foundation was strengthened, and inter-floor coverings were replaced. The building was equipped with new electric wiring, sanitary war, flooring, windows and doors. Its interior and exterior decoration was renovated. The territory around the school was equipped with necessary facilities, including a new sports ground. Paths leading to the school were surfaced with blacktop. Classrooms received new desks, blackboards and all the necessary equipment.

The Syrian side notes excellent quality of the repair works carried out in accordance with high standards, which makes this project unprecedented for Syria so far.