This morning I drove about 35 minutes to St. Louis’ Central West End for my first experience in a Greek Orthodox church service. Since my wife and son were out of town and I had no responsibilities at our church I thought I’d take the opportunity to do something totally out of the ordinary. Plus, this fall I’m teaching a course on worship history and theology, and it’s important that I experience worship in other traditions firsthand rather than just reading about them.
Kent Sanders | 12 March 2010

This morning I drove about 35 minutes to St. Louis’ Central West End for my first experience in a Greek Orthodox church service. Since my wife and son were out of town and I had no responsibilities at our church I thought I’d take the opportunity to do something totally out of the ordinary. Plus, this fall I’m teaching a course on worship history and theology, and it’s important that I experience worship in other traditions firsthand rather than just reading about them.

St. Nicholas Greek Orthodox Church is located a couple of blocks from Barnes-Jewish hospital, so it’s easy to find. The building is pretty nondescript on the outside, but once you’re inside there is no doubt you’re not in a typical evangelical church setting. I had some idea of what to expect, but honestly I was quite nervous because I didn’t want to stick out like a sore thumb. Orthodox worship is very participatory, and I wanted to blend in. However, I probably wouldn’t be able to follow the service precisely, and I knew I wouldn’t be allowed to take communion (which is only open to Orthodox). I asked two things of God before I went: “First, please meet me in this setting this is very unfamiliar. And second, help me not to stick out and embarrass myself!” I wanted to honor their process of worship and see if I could learn something.

God answered my prayer as soon as I left the parking garage. I saw a man with his two sons heading toward the church, so I fell in step behind them and went inside. Based on a previous visit with a class a couple of years ago (we only toured the church; we didn’t attend a service), I knew it was customary to take a candle into the area outside the sanctuary. So I dropped a $1 bill into the box, took one of the long, thin candles and headed up the stairs. Following their lead, I lit the candle and placed it upright in the long box that was filled with sand. This was not a large room but it was also filled with icons and some other items. I knew that in order to blend in I would have to make the sign of the cross multiple times and need to venerate icons before going into the sanctuary. Again following the lead of others, I stood before three different icons, made the sign of the cross and bent down, pretending to kiss them. 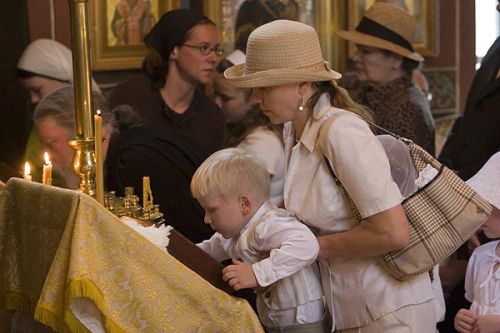 Let me say a couple of things about this. In my mind, I thought it was better to go through these motions and blend in rather than walk right in and make it obvious that I was an outsider. These particular actions are not part of my tradition, but I figured if I was going to worship with them I should do as they do. I recall doing similar kinds of things many years ago when I spent the summer in Ukraine on a missions trip. We visited several Orthodox churches and did not want to stand out from the nationals.

In addition, Orthodox Christians do not worship icons. These are visual representations of Christ, and also various saints who have gone on before. The veneration of icons is simply a way to show honor and respect to the person(s) depicted in the icons. We do the same kind of thing when we hang pictures of loved ones in our home, or even kiss a picture. Orthodox Christianity is all about signs, symbols and visual elements, and actions such as making the sign of the cross and bowing to icons are ways they express spiritual realities through physical means. They venerate icons but do not worship them.

Before I went, I was glad I did some reading on how to properly make the sign of the cross, because Catholics do it differently. (If you know your church history, you’re aware that Catholics and Orthodox have had disagreements for only about 1,000 years). To the best of my understanding, this is an act of dedication to God because it makes a literal cross (committing to mind, heart and actions to God) while recognizing the Trinity through the placement of your fingers. It’s a small gesture that contains quite a bit of neat symbolism.

For the uninitiated, going to an Orthodox service is like stepping back into history nearly 2,000 years.  The chants, music, architecture, smells and architecture are all completely foreign for anyone who attends a Christian church or other evangelical church. But in a way that’s the intention — unlike contemporary evangelical worship, which is designed to be very “user-friendly” through its use of modern music, technology and increasingly informal communication styles, Orthodox worship is designed to transport the worshiper out of the world into an entirely different place. In a sense, the purpose is to bring “heaven down to earth.”

The service itself last about 2 hours total. My guess is that a normal service doesn’t last that long because the last 30 minutes or so were taken up by some kind of oratorical competition where five different youth from the church gave brief speeches. This seemed to be a very odd time to have these speeches given, but I’m sure there’s something I’m missing here. At any rate, each one of these speeches were excellent. I couldn’t believe I was hearing teenagers give speeches that referenced saints from church history. It was amazing.

There was no real start time for the service; there was already a “matins” service in progress, and my understanding is that this flows into the “Divine Liturgy.” This was listed as beginning at 9:30 a.m., but a lot of people started coming in around 10 a.m. Punctuality is apparently not a big deal in the Orthodox church. By this time the sanctuary was nearly filled with worshipers, probably around 250 people.

The Divine Liturgy is a highly scripted and very ancient way of worship. St. Nicholas uses the liturgy of St. John Chrysostom. I won’t detail the whole service here because it was honestly difficult to follow. It included a reading from the Gospels and Epistles, many read prayers, a celebration of communion, and a good deal of what you might call “pomp and circumstance.” The priest and others helping up front all wore highly decorated outfits, just as you would imagine in an Orthodox church. There were ringing bells, songs and chants in English and Greek, and incense burning. When the time came for communion, I did not go forward because the Orthodox do not allow non-Orthodox to partake (similar to the Catholic tradition).

After the speeches mentioned above, the priest invited everyone to participate in another brief service connected to Lent. I didn’t follow this completely, but it involved asking for forgiveness, exchanging kisses and making a large circle around the pews. I noticed a few other people leaving at this point, so I made my exit also. It didn’t seem right for me to participate as a visitor.

I had planned on attending a service at the Cathedral Basilica (Catholic) just a couple of blocks away, but I was so overwhelmed by what I had just experienced I thought it best to come back another time.

Here are several key points about Orthodox worship I’m taking away from my visit to St. Nicholas:

–         They take worship very seriously. Everything they do communicates respect and reverence for God.

–         There is a real depth of theological content and awareness of Christian history.

–         Symbolism plays a big part in their worship, particularly related to the sign of the cross, icons, and many other elements that touch the senses.

–         Orthodox worship is decidedly NOT seeker-sensitive. One of my Master’s degrees is in Worship Studies, I teach worship and music full-time, and yet I was still lost through most of the service. You have to be very motivated to know and follow the liturgy (and knowing Greek doesn’t hurt, either). The people seemed very friendly, but the service is not understandable to outsiders.

–         Worship is very participatory, involving singing, praying, listening, kneeling, giving, and going up front to take communion. In some services people prostrate themselves on the ground.

–         There were readings from a gospel (Matthew) and a letter (Romans) but there is not much emphasis on “preaching” or “application” as in an evangelical sermon.

–         The service is filled with music — from the choir, the priest and others leading the service who are chanting. Nearly all of the liturgy was accompanied by music in some form. (However, I was very confused at several points when one person was singing in Greek, and other person was praying — why have both at the same time?)

I think it’s healthy once in a while to do something totally out of your realm of experience, just to get a new perspective. There are many things I appreciate about the Orthodox expression of faith, but I also have a number of questions as well. I know in the coming months I’ll be doing some reading to help me better understand the Orthodox tradition. One of the benefits is that it helps me better understand my own tradition (the independent Christian Church) and gives me a better perspective on why we worship the way we do. It also makes me proud of our evangelistic zeal, our use of contemporary art forms and our basic ideals of unity, dependence on the Bible, and relatively simple (and flexible) order of worship. As the saying goes, we want to be “Christians only,” but we’re not the only Christians.