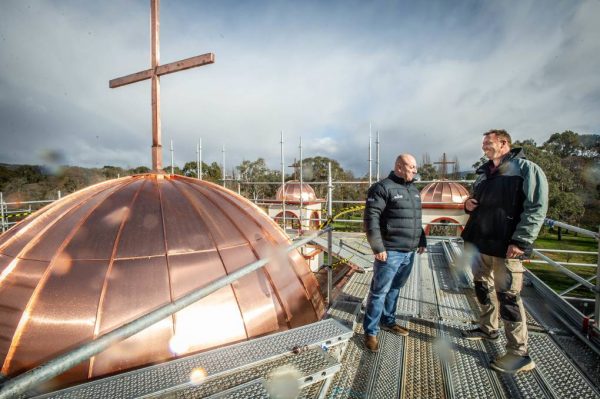 Canberra’s only Greek Orthodox church has received a $1 million makeover after hail ravaged the 50-year-old building in January.

As much as 80 percent of the roof of St Nicholas Church in Kingston was damaged in the unprecedented hailstorm.

Tiles and stained glass windows smashed during the storm led to flooding throughout the church.

“It was very sad for the Greek Orthodox community of Canberra.”

Church operations at St Nicholas only became stranger as COVID-19 restrictions led to reduced services, but this allowed for quick construction.

“We took coronavirus as an opportunity to proceed with our church restorations and ensure… St Nicholas [is] restored to its former beauty and glory,” John Loukadellis, President of the Greek Orthodox Community & Church of Canberra (GOCCC), said in May.

“Over the last four months we fixed the outside of the church, we replaced the copper [domes] with new ones and everything that was damaged is fixed,” Father Kipouros added.

Parishioners became passionate about fixing the church after the word got out.

“We had an interview with (local media) and after 10 minutes one Greek lady called and said, ‘look Father I’ve seen you on TV and I would like to offer $50,000 for the restoration of the dome’,” Mr Kipouros said.

However, these generous gestures were not necessary as the church was insured.

“Leading up to works there was an extensive process with insurance. The insurance company has been very good with the entire process. The damage was obvious,” Savil Group chief executive Dimitri Livas said.

Mr Livas, who is a broken building specialist, has been at the helm of the rebuild. The build was also personal for Livas, a member of the St Nicholas community.

“It’s worth trying to get things perfect, it’s not the sort of thing you want to come back to in a year,” Mr Livas said.

Melbourne-based iconographer Petar Stefanovic painted scenes inside the new domes. Mr Stefanovic went to Greece to learn iconography from a monastery at Holy Mount Athos, one of the few places the craft is taught.

“I’m interested in my faith as an Orthodox Christian and I was interested in painting and art. [Iconography] is an expression of my faith,” he said.

“It’s very fulfilling, I love the work that I do. In the dome right up the top there is an unique icon of Jesus Christ. There’s four angels around him. Then beneath that there are eight windows with prophets from the Old Testament.”

The new domes were created by Sydney-based roofer Ben Ashford, who learned the craft from his father.

“I learned [copper roofing] from my old man. He brought it over from England many years ago and basically I’ve been going on-site with him since the age of five and learning that way,” Mr Ashford said.

“There’s no TAFE course or anything for it.”

The copper domes have a shiny rose-gold look but this was temporary – the copper would eventually oxidise to a green-blue.

“It all depends on the air pollution in the area,” Mr Ashford said.

“I’ve done jobs in Tasmania where it stayed shiny for six to eight months but I’ve also done jobs in Japan where it went green within three days.

“I’m expecting it to stay pretty shiny here for at least four months.”

Mr Kipouros was unsure of how the church would celebrate the end of the rebuild while COVID-19 restrictions were still in place.

But the experience reminded him to take the good with the bad.

“Sometimes we must see all the positives from something negative,” he said.

“Finally we have fixed everything and this is the good news.”