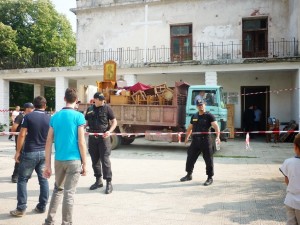 Tensions on the Greek-Albanian border, created in the last couple of days, have been further intensified and threaten to disrupt relations between the two countries. The problem was opened on August 16, when the Mayor of Permet sent private security, hired for this purpose, to empty the local Orthodox church and return it to the possession of the municipality.

Priests claim that many valuable items in the possession of the church disappeared on the occasion.

The private security, however, was met with strong resistance of Orthodox Christians, so the fight broke in which there were injured on both sides.

What triggered local authorities to remember and carry out the decision by the former Communist regime of Enver Hoxha in 1968, when hundreds of Orthodox churches in Albania were transformed into cultural centres over night, remains to be seen.

The Ministry of Foreign Affairs of Greece has sent a protest note to the Albanian authorities.