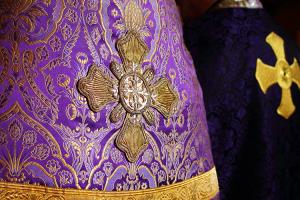 Meetings of the St. Juliana Society for St. Vladimir’s future clergy wives are often punctuated by laughter and animated conversation, and Monday evening’s gathering at the residence of Fr. Chad and Mat. Thekla Hatfield was no exception. Lively guest Khouria Krista West, host of “The Opinionated Tailor” podcast, offered a mini-seminar on both the care, and the spiritual symbolism, of clergy garments.

Krista has worked as an ecclesiastical tailor for over fifteen years and has created nearly 1000 sets of vestments through her Portland-based business. Her interest in the history and traditions of Eastern Orthodox liturgical vesture led her to Greece in 2004 to participate in a museum conservation course hosted by the Greek Ministry of Culture, and Lenten vestments at St. Vladimir’s since then she has continued to research multiple aspects of this field, including natural dyestuffs and early Byzantine textile history.

“I’m here to tell you eleven things about vestments,” announced Kh. Krista. “It was originally a nice, tidy list of ten, but then there was one I just had to add, so eleven it is!” Khouria noted that as a fellow clergy wife (her husband Fr. Alban is rector of St. George Antiochian Church in Portland, OR), she understood that there were some very practical issues related to vestments and as such, she offered this list:

Khouria Krista ended her talk with a quote from St. John of Damascus, who said that sight is the “queen of the senses.” In Orthodoxy, she concluded, there is a richness that can be a source of joy and celebration throughout our lives, and in this, vestments play an important part.

Listen to the podcast, “The Opinionated Tailor”