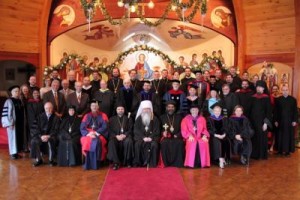 Seventeen graduates from St. Vladimir’s Seminary are now being sent out as priests, deacons, and lay ministers in service to the Church. At Saturday’s Commencement Exercises, the seminary awarded diplomas in three programs: 1 Master of Theology, 8 Masters of Divinity, and 8 Masters of Arts degrees. Graduates represented a broad range of ecclesial jurisdictions and included both Eastern and Oriental Orthodox Christians; four priests and one deacon were among the graduates.

Commencement crowned the week’s celebrations, which also included the annual Board of Trustees meeting, a Trustee–Student dinner on Thursday evening, and a Friday Trustees dinner with staff and faculty. On Saturday morning, May 18, His Beatitude Metropolitan Tikhon, primate of the Orthodox Church in America (OCA), and His Grace Nicholas (Ozone), auxiliary bishop for Brooklyn, Self-Ruled Antiochian Orthodox Archdiocese of North America (AOCANA), concelebrated the 9:00 a.m. Divine Liturgy, in which second–year seminarian and Commencement Salutatorian Nicholas Roth was ordained to the Holy Diaconate. His Beatitude also presided at the 2 p.m. Service of Supplication (Molieben) in the campus Chapel of the Three Hierarchs before joining the faculty, staff, graduates, and visitors for Commencement ceremonies which followed. Board of Trustees member His Eminence Metropolitan Zachariah Mar Nicholovos, Northeast American Diocese of the Malankara Orthodox Syrian Church, also attended the Molieben and participated in the graduation exercises.

The Rev. Dr. Sarah Fogg delivered the Commencement Address to the Class of 2013. Director of Pastoral Care at St. John’s Mother InesRiverside Hospital in Yonkers, NY, Dr. Fogg has supervised dozens of St. Vladimir’s students in their hospital visitation and chaplaincy training. Dr. Fogg recalled her personal relationships with seminarians, saying, “As you came for training, I engaged with you in preparing you for pastoral visits. I learned more what hands on pastoral ministry is, as I challenged you with what God has for you. Thank you for seeking me out.”

Metropolitan Tikhon, president of the Seminary and chair of the Board of Trustees, opened the Commencement Exercises and conferred degrees upon the graduates. In his closing remarks, he encouraged the senior class to remember to be watchful. “Watchfulness will help you preserve all the virtues you have acquired as you go forward into the world. Watch with your heart and do not simply look. Watch your pastors. Watch your flocks. Watch your neighbors. Watch your enemies. Why? So that you might see Christ in others. May God strengthen and bless all of you. May He inspire all of you to take what you have received here, to go out into the world as watchful servants.”

The Valedictorian and Salutatorian were selected by the faculty on the basis of their excellent performance in all aspects of seminary life, including academic work, participation in chapel services, and completion of community service assignments. Class Valedictorian Harrison Russin, Student Ecclesiarch from 2011–2013, also earned a commendation for community service. Harrison was awarded the St. Basil the Great Award for high academic achievement twice during his tenure at St. Vladimir’s, and is a gifted musician who sang with the SVOTS Octet all three years. His thesis was titled “The Iconology of Fr. Sergius Bulgakov.” Harrison will begin a Ph.D. program in the fall of 2013 at Duke University in Durham, North Carolina, studying in the field of musicology.

“Commencement isn’t the end, it is the beginning,” noted Harrison in his address. “The best analogy for me is to compare this time to Great Lent. Seminary has been a process of death to self, and struggle. Seminary has not been easy—yet today is our Pascha.”

Newly ordained second–year seminarian Dn. Nicholas Roth was Salutatorian. “As you leave today, you join the ranks of those who have come before you,” Dn. Nicholas said in his remarks. “Our alumni build up Orthodox communities, teach, care for those in need. In your time here you started student organizations, gave back to the community, and worked to teach the Orthodox faith to all who would listen. Today we celebrate all you have done and we look to see more of what you do in the future.”

This year for the first time, the Student Council presented a new award to a faculty member. Decided by student vote, the St. Macrina the Great Award recognizes the dedication and achievements of a St. Vladimir’s professor. In its inaugural year, outgoing Student Council President The Rev. James Parnell presented the award to The Very. Rev. Dr. Alexander Rentel, assistant professor of Canon Law and Byzantine Studies and The John and Paraskeva Skvir Lecturer in Practical Theology. Anna Margheritino, wife of Seminarian Sandro Margheritino, was commissioned to make two icons for the St. Macrina Award; one will be continually displayed on campus, and each year, another will be presented to the Award recipient.

The Very Rev. Dr. John Behr, dean, and The Very Rev. Dr. Chad Hatfield, chancellor/CEO, congratulated and encouraged the graduates as well. “As we said at the liturgy this morning: ‘Axios Axios Axios!'” exclaimed Fr. John. “Friends, as you depart from here, never forget the words that Christ said: ‘You did not choose me, but I choose you and appointed you that you should bear fruit.'”

President of the Alumni Association Board Gregory Abdalah presented each graduate with a cherry wood frame to display their diplomas, and welcomed them to the St. Vladimir’s Alumni Association. “You join over 2000 alumni spread over 20 countries on six continents,” noted Mr. Abdalah. “Just like the Apostles went out and preached the Gospel to world, you act as ambassadors who carry on their legacy, as you take St. Vladimir’s into the world.”

The entire campus community wishes the Class of 2013 many years!

View the Commencement photo gallery and the gallery of the morning Liturgy and ordination.