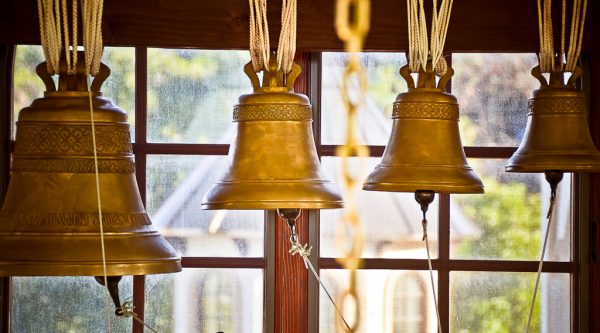 Moscow. July 24. INTERFAX – This Saturday in Moscow and Moscow suburbs a wave of bell-ringing will take place, which will mark the celebrations on the occasion of the 1030th anniversary of the Baptism of Rus.

“At 12:15 the bells will ring in all the churches in Moscow and the Moscow region, where it is possible, starting from the bell tower of Ivan the Great. The general sound of the bells will add joy to all of us on this anniversary day,” said Press Secretary of His Holiness, Patriarch Kirill, Priest Alexander Volkov, on Tuesday at a briefing in Moscow.

According to him, this day for the first time, at least in the recent history of the Russian Church, the service will be held not in one of the churches, but at the Kremlin’s Cathedral square, under the open sky. His Holiness, Patriarch Kirill of Moscow and All Russia, will officiate a Liturgy together with the Head of the Orthodox Church of Alexandria, Patriarch Theodore, who will come to Moscow to attend the celebration.

In total, the celebration of the Baptism of Rus in the Russian capital will be attended by representatives of ten Local Orthodox Churches, said Head of the Synodal Department for Church’s Relations with Society and Mass Media, Vladimir Legoyda.

He called the Baptism of Rus “the biggest event in our country’s history.” To illustrate this, he quoted the words of St. Prince Vladimir Equal-to-the-Apostles: I was beast, and became man.

Despite the changes that have occurred since then on the map, “political boundaries do not pass through our hearts, and it is very important that the Church has preserved its unity – unity in faith, unity of the fraternal peoples,” Mr. Legoyda noted.