All Saints of Russia and America

The present feast is an extension, or a prolongation of that one, with the exception that today we concentrate our attention and praise on our “local” saints. “So” you may ask, “if that's the case, why do some calendars say ‘All Saints of Russia?’ Doesn't the word ‘local’ presuppose that we honor the saints which have shone forth on this continent, rather than some far distant land?”
Fr. Basil Rhodes | 26 June 2011

The Lord said to His disciples: “Follow Me.” And with these two short words, they left everything behind, and followed Him.

Today we continue our joyous celebration of the Saints. Last week was the universal commemoration of all of the saints throughout the world; those who are known, as well as those whose names are known only to God. The present feast is an extension, or a prolongation of that one, with the exception that today we concentrate our attention and praise on our “local” saints. “So” you may ask, “if that’s the case, why do some calendars say ‘All Saints of Russia?’ Doesn’t the word ‘local’ presuppose that we honor the saints which have shone forth on this continent, rather than some far distant land?” 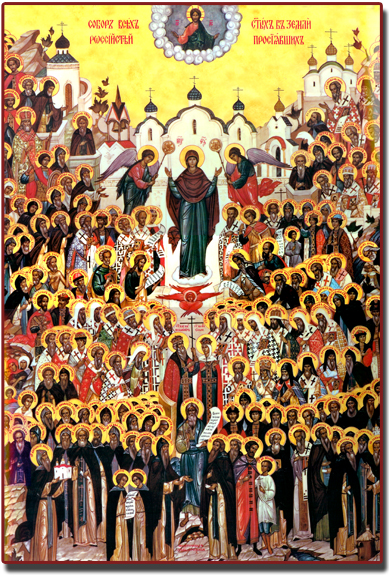 My old friend Fr. Seraphim Gisetti might answer such a question like this: “Well, yes and no.” Yes, in that the goal of our celebration is to honor the saints closest to us; to ‘celebrate our own,’ as it were. No, in that we are still a very young and immature Church, and none of the saints on our calendar were born outside of the Russian Empire, nor the Russian Orthodox Church. It would be silly, not to mention spiritually arrogant, on our part to claim as uniquely ‘local’ and ‘American’ those who clearly are linked to the Church of Russia. Sometimes we in the OCA get this odd notion that our jurisdiction appeared ‘ex nihilo,’ out of nothing. This is incorrect thinking. Every baby has a mother. We are in a transition period. The Russian Church honors her saints on this continent and so do we. We have a shared history, and without our Mother, we would have no life. So now, let’s talk a little about the
saints.

Why is it that St. Herman, St. John of Shanghai, St. Innocent, and the rest of our saints, are so important to us? Well, it’s because we admire them, and we also have a secret wish to be like them. I say a secret wish because most of the time we pay very little heed to that little voice that whispers in our souls: “be holy, as I am Holy.” The very word “Saint” means “one who is Holy.” It comes from the same root as the word “Sanctified.” St. John of Shanghai once said that “the closer a man is to God, the holier he is. Saints are those” he says,” who have partaken of the Divine and made it their own.” Abba John, in the Gerontikon, or ‘Sayings of the Desert Fathers’ says: “The saints are like a group of
trees, each bearing different fruit, but watered from the same source. The works of one may differ from another, but it is the same Spirit that works in all of them.” So the saints are near to God, and become like Him. But the saints are also near to us. The following is taken from a sermon of St. John of Shanghai and San Francisco, on the occasion of the celebration of the Feast of All Saints of Russia:

“The saints enjoy blessedness because God is blessed. From them comes light for men. Through them the power of God is revealed. Saints retain all that is characteristic of the human condition; they know everything that pertains to us. They are near to God, but they are also near to us; they walked and lived among us. The people of Holy Russia venerated them, kissed their icons and holy relics, wanted to be as close as possible to the saints, and by touching that holiness, the Russian land was filled with it…(But) do not think that contact with holiness is the fate of only the Russian nation. No! All peoples can live in the Spirit in which Holy Russia lived and continues to live. And when they do, they shall draw near and begin to understand each other.” These are important words for us today as Americans. 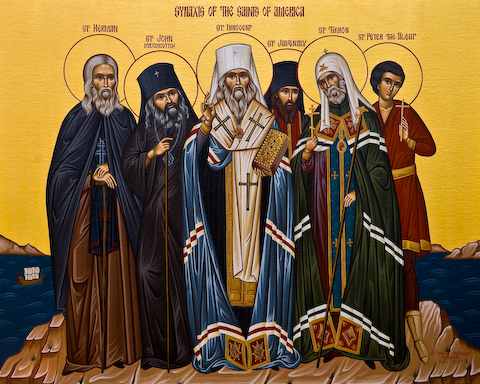 I will conclude with the words of one of the saints of Russia, the Holy and Righteous John of Kronstadt, who says:

“We ought to have the most lively spiritual union with the heavenly inhabitants: all the saints, apostles, prophets, martyrs, prelates, the venerable and the righteous, as they are all members of the single Body, the Church of Christ, to which we sinners also belong, and the living Head of which is the Lord Jesus Christ Himself. This is why we call upon them in prayer, converse with them, thank them and praise them. It is urgently necessary for all Christians to be in union with them, if they desire to make Christian progress; for the Saints are our friends, our guides to salvation, who pray and intercede for us.”