Getting to Know the American Saints: On the Sunday of All Saints of America

Source: Fr. Matthew Jackson's blog
There is a great temptation sometimes to think of the Saints as “those others” – to place them on a different plane and to think that their achievements are unattainable to us in our time and place. Today reminds us that that’s not at all true.
Priest Matthew Jackson | 23 June 2014 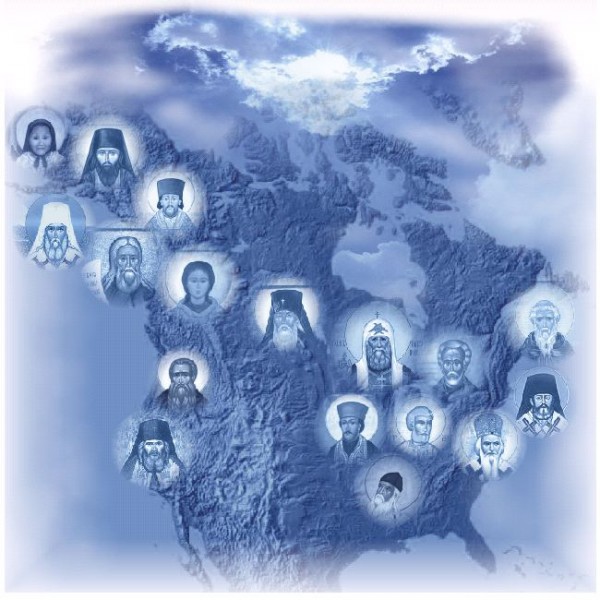 In the Name of the Father, and of the Son, and of the Holy Spirit, Amen. Christ is in our midst! He is and shall be!

Every year, on the 2nd Sunday after the Great Feast of Pentecost, we celebrate the memory of All Saints of America, whether known or unknown. Really, the day is set aside for a local people to recognize their Saints – so in Greece it’s All Saints of Greece, and in Russia, All Saints of Russia, etc. This is one of those times liturgically that very beautifully brings us into direct contact with holy people who very literally have been where we are. There is a great temptation sometimes to think of the Saints as “those others” – to place them on a different plane and to think that their achievements are unattainable to us in our time and place. Today reminds us that that’s not at all true. There are people recognized as Saints (not to mention those we don’t even know about) who have lived in modern times in this very land. We are all called to be Saints; “Be ye perfect, as your Father in heaven is perfect” (Matthew 5:48), and “Be ye holy, even as I am holy” (multiple places in Leviticus). The word Saint means holy – Sviat, Agios. To be holy means not just that something is sacred, but it means “to be set apart.” As Christians we are called to be set apart in two ways – to be set apart from the world, and to be set apart for God.

The Church sets the Saints before us as those who set themselves apart for God. They fulfill the Gospel commandments; they dedicate everything they are to Christ. And so in our hymns we hear about their lives and their exploits, and in our hagiography we read in more detail about their lives as they lived in Christ. But not only are we to learn about the Saints, to follow in their steps and to be inspired by their lives, but we’re also to be in relationship with the Saints. We as Orthodox don’t traditionally speak of the Church as visible and invisible – there is One Church, composed of those living in this world, and those alive in Christ in the world beyond. Just as we have a relationship with the Mother of God and with our patron Saints, we are encouraged to learn about, and then get to know, other Saints as well. We obviously can’t, in our earthly life, do this with all the Saints, but people typically find Saints with whom they resonate for one reason or another, and then they get to know those Saints. So with that in mind, instead of a detailed life of one of our American Saints, I basically want to give a list of our Saints with a sentence or two about each – an introduction to our American Saints, and perhaps something about one or more of them will inspire you to deeper study and to prayer and relationship.

St. Herman of Alaska – great missionary monk and wonderworker of Alaska, preached the Gospel, built schools, defended natives from mistreatment by Russian company, lived as a hermit most of his life on Spruce Island, 1st glorified American Saint

Martyred Hieromonk St. Juvenaly – part of original Russian mission from Valaam, was part of the baptism of over 14,000 Alaskan natives through his missionary efforts, later killed during his Gospel ministry by natives

St. Peter the Aleut, ProtoMartyr – with a group of Aleut hunters captured by the Spanish and taken to San Francisco in 1815, tortured brutally for refusing to convert to Roman Catholicism, St. Herman heard about his death and called him a new martyr

St. Jacob Netsvetov – first Alaskan ordained priest, traveled over huge stretches of land to minister and preach the Gospel, after his wife reposed he went to the Alaskan interior, preaching to many people who had never heard the Gospel, during his last trip to the Yukon he baptized over 1300 natives

St Innocent of Alaska, Metropolitan of Moscow – married Russian priest assigned to Alaska in 1823, learned languages and translated Gospels and services, wife reposed while he was in Russia in 1838, took monastic vows in 1840 and was made bishop of Kamchatka and the Aleutian Islands, continued traveling and working for the spread of the Gospel, later appointed Metropolitan of Moscow

St. Tikhon, Patriarch of All Russia – worked tirelessly during his tenure in America as bishop, traveling, converting many, founding Churches, and founding St. Tikhon’s Monastery, worked to establish Church structure for the American diocese, returned to Russian in 1907 and elected Patriarch in 1917, harassed by the government, imprisoned and persecuted, reposed in 1925, considered a martyr (many think he was poisoned by the Bolsheviks)

Hieromartyr St. Alexander Hotovitsky – married Russian priest assigned to St. Nicholas in NY, very active in the community and in publishing, built a huge new cathedral, returned to Russian in 1914, he was arrested and tried by the Soviets, eventually facing a final arrest in 1937 when he was sentenced to death and executed

St. Raphael of Brooklyn – born in Lebanon to Syrian parents, educated both in Damascus and Russia, 1st Bishop consecrated in America (by St. Tikhon), served as auxiliary bishop of Russian Church, based in Brooklyn, traveled constantly serving the Arab Orthodox throughout North America (visited St. George Church in Vicksburg!)

St. Alexis Toth – married Uniate Greek Catholic priest in Slovakia, he came to America as a missionary priest after his wife’s repose, the Latin bishop refused to receive him, he knew his heritage was Orthodox and had considered conversion before and so now he entered the Russian Orthodox Church in America, through his ministry over 20,000 uniates were re-united with the Orthodox Church

Hieromartyr St. John Kochurov – married Russian priest who came to America as a missionary in 1895, served in Chicago, built the parish and founded other parishes in the Chicago area, translated texts into English, returned to Russia in 1907, martyred by Bolsheviks in October 1917 becoming the protohieromartyr (1st priest martyr)of the Soviet yoke

St. John Maximovitch, Wonderworker – life is far to amazing to detail here, spent the last years of his life as Archbishop of San Francisco (1962-1966) and was known far and wide even during his lifetime as a holy man and great worker of miracles

St. Nikolai Velimirovich – came to America from Communist Yugoslavia as a refugee in 1946 (spent time in Dachau, imprisoned and tortured by Nazis), ended his life as rector of St. Tikhon’s Seminary in 1956

Hieromartyr St. Basil Martysz of Poland – married Polish priest who was a missionary in North America from 1900 to 1912, was in charge of Orthodox affairs for Polish army for 25 years, martyred in closing days of WW2 by bandits who tortured and killed him in 1945

St. Seraphim of Uglich – Russian monastic priest who was a missionary under St. Tikhon from 1902-1908 where he served as a teacher, deacon, and priest, consecrated bishop of Uglich in 1920, refused to cooperate with the Bolsheviks to form a new Synod, eventually exiled in 1928 from which he never returned (possibly martyred in 1937)

Hieromartyr St. Anatole of Irkutsk – missionary priest in North America from 1895-1903, glorified as a New-Martyr by the Russian Church for his suffering, though he reposed freed from prison in the early 1920s

St. Barnabus the New Confessor – born in Garyn Indina in 1914, returned to Serbia as a child and became a monk in 1940, later consecrated bishop and accused of being an American spy for his open criticism of the communist governments mistreatment of Christians, arrested and tortured and imprisoned, death believed to be by poison (like St. Tikhon)

All of these people lived and worked on this very continent, and now are glorified in Christ and recognized as Saints of our land. And we can be sure that there are many more Saints that are unknown to us.

May all the Holy Ones of America pray to God for us!