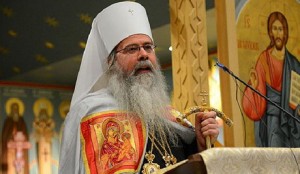 The Russian Orthodox Church can offer a great deal to the modern world, says metropolitan Tikhon of All America and Canada. The Orthodox Church of America participated in the celebrations dedicated to the 1025th anniversary of Christianization of Russia. In an interview with the Voice of Russia, metropolitan Tikhon shared his impression on his visits to Moscow, Kiev and Minsk.

This is the second visit to Russia of the archbishop of Washington, metropolitan of All America and Canada, but he has visited as the head of the Church for the first time. He has headed the American Orthodox Church since November 2012. It was a real blessing for metropolitan Tikhon to participate in the grandiose celebrations dedicated to the 1025th anniversary of the Christianization of Russia together with the heads of other Orthodox Churches.

“We’re filled with gratitude to His Holiness Patriarch Kirill for the invitation to come and to pray together with the hierarchs from all the Orthodox Churches and also to venerate the holy relics and to visit the sacred places of Moscow and Minsk. It’s truly a wonderful opportunity to visit these places in person and to venerate the saints that we know very well in North America and that inspire us in our lives as Orthodox Christians,” metropolitan Tikhon says.

The American Orthodox Church appeared as an independent Church structure in the 1970s and received autocephalous from the Moscow patriarchate. At present, American Orthodoxy is gradually gaining its weight in society, while the congregation is growing every year. Metropolitan Tikhon continues.

“We have several aspects of life of the Church in North America. We have, of course, many immigrants from different nationalities, but also many converts who’re voluntarily joining to find Orthodoxy. Many parishes in North America are composed of a mixture of third and fourth generation of immigrants or more recent immigrants. There’re also many new converts from various faith traditions and many others who find the fullness of the faith in the Orthodox Church. As an example, a little over one-half of our Synod Bishops is composed of converts to Orthodoxy, and our seminaries usually have about fifty percent of students coming from different backgrounds who’ve converted to the Orthodox faith,” metropolitan Tikhon added.

“There’re several ways. I think the first would be the strong missionary activity of the Russian Church, which has been exercised for many years in the Far East, as well as in North America. In North America we owe our existence as a church to the missionary activities of the Russian Church. That’s one aspect, in which the Russian Church can have a strong influence throughout the world. Another area in which the Russian Orthodox Church has certainly made its influence felt is through its strong stand on Christian and moral values in the society. I think that’s a good example for the rest of the world of how the Church and the Gospel of Christ should really be the foundation of that society. And His Holiness Patriarch Kirill and the Russian Orthodox Church have certainly been great voices in that area,” metropolitan Tikhon concluded.