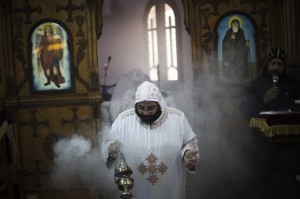 THE RED MONASTERY, Egypt — Locked inside a 6th century church in a desert monastery are some of the jewels of early Christianity — ancient murals in vivid pinks, greens and reds depicting saints, angels and the Virgin Mary with a baby Jesus, hidden for centuries under a blanket of black soot.

Italian and Egyptian restorers are meticulously uncovering the paintings, some of the earliest surviving and most complete examples of early Coptic Christian art. But the work, in the final stages more than a decade after it started, is done quietly to avoid drawing attention — and there’s no plan to try to attract visitors, at least not now.

“This is our heritage and we must protect it,” said Father Antonius, abbot of the Red Monastery where the Anba Bishay Church is located. He takes it as a personal mission to protect it. The church’s heavy wooden door has only two keys. He keeps one and a young monk he trusts keeps the other.

“I don’t think there is a church anywhere in Egypt that even begins to match the beauty of this one,” Antonius said, beaming like a proud father.

The little known Anba Bishay Church offers a striking example of how Egypt’s Orthodox Coptic Church jealously guards its heritage against formidable odds — whether decades of neglect, discrimination by the Muslim majority or the violence by Islamic militants, who have gained significant power since the 2011 ouster of longtime autocrat Hosni Mubarak.

The protection of its heritage took on greater urgency when 40 churches were wrecked, burned and looted in a pogrom-like wave of attacks in August, blamed on Islamic militants. Coptic leaders say the attacks are the worst in centuries.

The attacks laid bare a worrisome failure or unwillingness by authorities, as well as moderate Muslims, to protect the churches. Christians, who make up about 10 percent of Egypt’s 90 million citizens, were left with their deepest sense of vulnerability in recent history. Egypt’s powerful military pledged with great fanfare to restore the churches. But Christians say that, two months later, they are still waiting for concrete steps.

The Coptic Orthodox Church is one of Christianity’s earliest branches. It was born in Egypt, and almost all Egyptian Christians throughout the centuries have belonged to it. But it never ruled in Egypt. Instead, Copts were subjects in a succession of empires, from the Romans and Byzantines through various Muslim dynasties.

The result is a complicated legacy. A historic sense of persecution engrained a deep secrecy in the Church, which has long turned inward for its own protection. The lesson that Copts long absorbed — take care of yourselves and don’t involve outsiders — has been applied to their conservation efforts.

Complicating those efforts, the Copts’ material civilization is fragile. They have not left mighty stone temples, tombs and mosques like Egypt’s pharaonic or Muslim rulers, noted Imad Farid, an expert on historical Coptic architecture.

Instead, Copts traditionally built in mud brick, which deteriorates over time, especially in the eroding moisture and floods in the Nile River valley. Desert monasteries, preserved by aridity, constitute most of what is left of Coptic civilization. They have been the traditional repositories for the Church’s artistic treasures, from icons and murals to rare manuscripts.

Past generations of Copts “left us not with a history of rulers but of a people and their daily lives,” Farid said. “The monasteries have preserved their way of life. They are like conservation zones for human and intellectual heritage.”

But many monasteries were abandoned over the centuries, in part because of a shortage of monks. Over time, their mud brick chapels and hermit cells fell prey to elements, earthquakes or depredations from Bedouin attackers.

For example, the Red Monastery and the nearby White Monastery were once united in a sprawling complex to which some 5,000 monks belonged. Both were deserted by the 8th century and have only been resurrected in the last 30 years.

“Our heritage is disappearing because of random restoration work, urbanization and the work of the ignorant. I don’t want future generations to curse us for not documenting what we have now,” said Father Maximus, a monk and one of the church’s top conservation experts.

A slender 59-year-old who carries an IPad and an IPhone wherever he goes, Maximus has led a team of Italian restoration experts traveling across Egypt since 1996 to save as much as they can of Coptic heritage. His team, including Egyptian experts and backed by the American Research Center in Egypt, has worked on the murals of Anba Bishay Church since 2002, in the desert on the edge of the Nile River valley, some 500 kilometers (310 miles) south of Cairo.

The Anba Bishay Church, modeled after Jerusalem’s Church of the Holy Sepulchre with an intricate array of niches and columns, is considered the most complete historical church structure in Egypt.

“It is a very unique church and now it is in a very good condition,” enthused Maximus. He says the work is a battle against time — to “protect the physical Coptic heritage, to prevent it from disappearing.”

The attacks in August illustrate the latest danger to Egypt’s Coptic culture.

Among the 40 churches attacked was a 1,600-year-old church gutted by fire and stripped bare of its contents. Others were built in the late 19th or early 20th centuries. Most of the attacks took place in southern Egypt, an underdeveloped region with a combustible mix of powerful Islamic radicals and sizable Christian communities.

Some of the attacks began as retaliation for the Christians’ support of the ouster of Islamist President Mohammed Morsi in a popularly backed July 3 military coup.

Widely held myths of hidden wealth have been fueled by the Church’s traditional secrecy, said Bishop Biemen, abbot of the Monastery of Archangel Michael, near the southern city of Luxor.

“Because we have been hurt so often, we have become an insular community. That has created a sort of mystique about us that included tales of priceless jewels hidden in churches,” he said.

In a recent tour of southern Egypt, The Associated Press found Christians still grieving over the loss of churches.

As a show of resilience, some have held Masses and weddings in the blackened shells of churches, using only a makeshift altar. Still, priests say, some worshippers have stayed away, too hurt to see the condition of the churches where they lived out milestones like weddings, baptisms and funerals.

“God, please be merciful to us and don’t abandon us,” Father Boutros said in a recent early morning Mass at the John the Baptist Church in the town of Abanoub, some 400 kilometers (250 miles) south of Cairo.

“God, please save us from the evil ones,” he said, as the congregation of around two dozen women and a handful of men repeated after him.

During the service, two church workers acted as lookouts outside, in case of renewed hostility by Muslim extremists. Schoolchildren dropped in for a quick prayer or communion on their way to classes.

The church’s walls were blackened. Icons and murals, destroyed or stripped away in the looting, were replaced by posters of John the Baptist, Jesus and the Virgin Mary. Because the pews were burned or stolen, worshippers sat on rented chairs with dirty red velvet upholstery. Light bulbs were powered by a wire strung in from outside the church, since its own electrical system was destroyed.

“To burn a church is to burn the heart of every man who comes here to pray to God,” said Maher Nakhlah, a 42-year-old U.S.-trained English teacher attending the Mass. “It is difficult to understand how a place where people pray and which is void of any hatred could be attacked.”

In the nearby city of Assiut, the Gothic structure of the Franciscan Church of Saint Theresa, built by Italians early in the last century, remains largely intact after Muslim militants set it on fire.

But the damage inside betrayed a worrying hatred for the Christian faith.

A wooden statue of the Virgin Mary was decapitated, and the hands chopped off. The face, hands and feet were also bashed off a porcelain sculpture of Saint Theresa, dating back to 1924. One of the church’s two confessional booths was torched.

Friday Mass at the church is now held earlier in the day so congregants can leave and lock the church gates before Muslims finish their noon prayers at the nearby mosque, used by ultraconservatives.

“The problem is not one of material loss, it is to do with psychology” said Jihan Bramble, a Christian engineer. “This is the price of freedom for now. But our persecution will continue indefinitely. It always has.”

April 18, 2013 In a cave here high in the desert mountains of eastern Egypt, the man said…