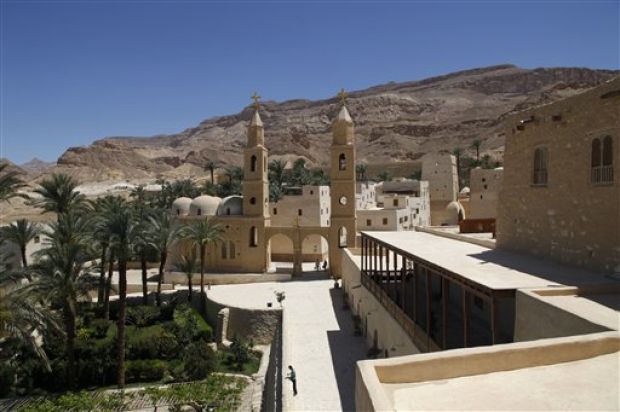 In a cave here high in the desert mountains of eastern Egypt, the man said to be the father of monasticism took refuge from the temptations of the world some 17 centuries ago. At the foot of the mountain, the monks at the St. Anthony’s Monastery bearing his name continue the ascetic tradition.

But even this remote spot is touched by the turbulent times facing Egypt’s Christians, who fear for their future under the rising power of Islamists. Monks normally immersed in spirituality are joining the increasingly assertive tone of many in the minority community, vowing Christian voices won’t be silenced.

Their tone reflects the growing activist political role of the Coptic Orthodox Church, which for decades had adopted a quietist policy, avoided rocking the boat and relied on backroom dealings with the country’s leadership to try to preserve the community’s rights. In doing so, the church is essentially following the lead of many young Christians who — caught up in the fervor of Egypt’s revolution — insist they must stand up for themselves rather than trusting politicians to protect them.

“Anyone who thinks of hurting our church will face divine retribution,” Father Yacoub, the monastery’s deputy head, told The Associated Press this week. “Our church grows stronger with martyrdom. My faith and confidence tell me that so long as our church is in the hands of God, no one can hurt it.”

Islamist President Mohammed Morsi, of the Muslim Brotherhood, has vowed to promote equality between Egypt’s Muslim majority and Christian minority. But Christians have been worried by the growing influence in society and government of Muslim conservatives and hard-liners, many of whom espouse rhetoric consigning Christians to second-class status.

A mob attack this month on the Cairo cathedral that serves as the seat of the Coptic pope raised alarm bells among Christians, who make up about 10 percent of the country’s 90 million people. There has been a surge in attacks on Christians and churches in the two years since the ouster of autocrat Hosni Mubarak. But for Christians, the cathedral violence laid bare their vulnerability. Morsi quickly condemned the violence, saying attacking the cathedral was like attacking him personally. But the Coptic Pope Tawadros II accused him of failing to protect the cathedral in an unprecedented direct criticism.

One of the world’s oldest monasteries, St. Anthony’s would seem a world away from such concerns, with its atmosphere of isolation.

Nestled at the foot of an imposing rock mountain in the desert near the Red Sea 100 miles (160 kilometers) southeast of Cairo, its fortress-like walls enclose churches, chapels and chambers for its around 100 monks. The oldest section — a small chapel — is believed to date to the 4th Century. Until several years ago, a spring was the sole source of water for the monks and their date palms and olive trees.

Little disturbs the routine of spiritual contemplation. Before dawn earlier this week, the monastery was still engulfed in darkness, only a sliver of moon in the sky, when the black-clad monks emerged from their cells. They walked up a cobblestone alley to the 15th Century Church of the Apostles to start their day with two hours of hymns and prayers.

With Orthodox Christians deep into Lent — their Easter Sunday is May 5 — that pre-dawn prayer is followed by three more liturgies, two hours each, the last ending at 5 p.m.

But the monks are definitely in touch. Yacoub sports both a Blackberry and an IPhone. He frequently drops mentions of what he reads on social networking sites. He is also willing to cast off some of the caution and diplomacy that the church has been renowned for in dealing with politics.

“If there is someone out there who thinks that persecuting the church or attacking the cathedral will drive us out of Egypt, then they are making a big mistake,” said Yacoub, a 51-year-old trained engineer. “They are pestering us so as to drown the Coptic voice that rose during the revolution.”

“No one can cover up facts or silence Egyptians any more. That party is over.” 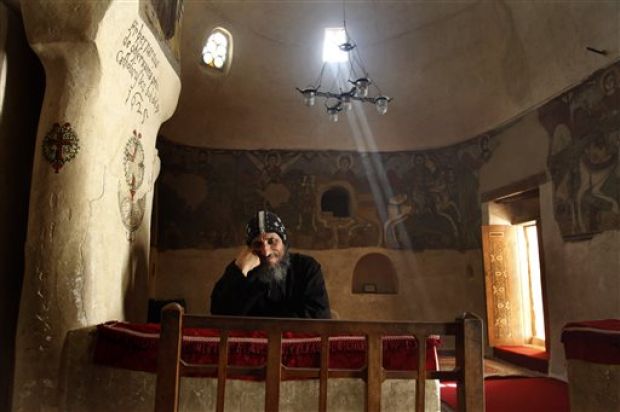 For monks to talk like this is a dramatic sign of the sentiment among Christians here. Egypt’s estimated 1,200 monks constitute the heart and soul of the Coptic Orthodox Church, one of the world’s oldest denominations. Monasticism is believed to have started in Egypt. St. Anthony, born in the mid-3rd Century, is believed to be one of the first, shedding his possessions to live in the desert. His followers gathered to first build the monastery here below his hermit’s cave.

Over the centuries, monks offered spiritual guidance to Christians and have been seen as protectors during bouts of persecution through history, starting with the Romans. Egypt’s monasteries saw a revival in the 1970s, and since then many have been renovated. Today, tens of thousands of Christians flock to festivals on saint’s days at major monasteries like St. Anthony’s and Deir el-Muharraq, near the Nile River in southern Egypt. They also often come individually for visits to pray and meditate through the night.

“The monks are the church’s first line of defense because our role is to constantly pray to protect the church and comfort the flock,” said 65-year-old Father Bakhomious, a monk at St. Anthony’s.

He said the attack on the cathedral in Cairo was “painful — a defining moment in the history of Egypt and the church.”

“Revolutions have their cons and pros and we as Christians must endure and pray for stability and peace.”

Another monk, Father Hedra, says the church can feel the worries among the flock. In a sign of Egypt’s overall economic woes, donations of food by the faithful to St. Anthony’s to distribute to the poor have gotten smaller, he said.

“People are weighed down by their troubles and they come to us to rest and breathe fresh clean air,” he said. “I can also sense the burden on everyone from the attacks on the church. When we have a crisis like that last one, the whole church is praying.”

Christians felt empowered by their participation in unusually large numbers in the 18-day revolution that toppled Mubarak’s authoritarian regime. Like Muslims, they rose up to create a democratic state that safeguards the dignity and rights of all Egyptians.

The April 7 violence at the cathedral showed Christians’ anger and readiness to push back.

The violence followed a funeral service at the cathedral for four Christians killed a day earlier in sectarian violence in a town north of Cairo. During the service, aired live on several TV networks, mourners broke into chants against Morsi and his Muslim Brotherhood — an unheard-of show of politics inside a church. “Hold your head high, you are a Copt” and “We will never leave our country,” were among the chants.

When several hundred mourners attempted to march outside the cathedral to protest the killings, a Muslim mob set upon them, pelting them with rocks and firebombs, leading to a battle between crowds inside the cathedral and outside.

Morsi ordered a full investigation, reassuring Christians about their safety. However, a senior presidential aide in charge of foreign relations later issued a statement in English saying the violence erupted when Christian protesters vandalized cars — a comment Christians saw as blaming them. Islamist hard-liners delivered sharp public warnings to the church against involving itself in politics.

Tawadros, the pope, was dismissive of Morsi’s promises, including his reviving of a commission on equality. “We want action not words and, let me say this, there are many names and committees but there is no action on the ground,” he said.

Still, alongside their more assertive tone, the monks preserve their tradition of finding solace in prayer — along with the long-term perspective engrained over the centuries.

“As monks, we will pray until God lifts his anger and help us cope with what we are facing,” said a monk at Deir el-Muharraq in southern Egypt, also named Father Bakhomious. “Egypt has seen a lot over the ages and what is happening now is a chaotic phase that will eventually end,” he added.

October 17, 2013 THE RED MONASTERY, Egypt — Locked inside a 6th century church in a desert monastery are…