Among the Ruins of Iraq, Christians’ Faith Burns Brightly

Source: National Catholic Register
‘There is a kind of feeling that they cannot express,’ Archbishop Bashar Warda said, ‘but they at least feel relaxed in a way that even if, God forbid, something would happen, they are in safe hands.’
Ann Schneible | 11 June 2015 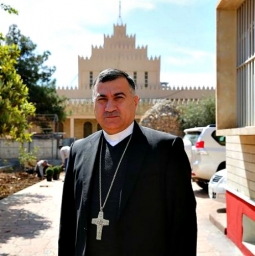 ERBIL, Iraq — Despite the potential threat from the nearby Islamic State (ISIS), several monks and students in northern Iraq have found refuge in an ancient monastery, certain they are in God’s hands, no matter what happens.

Erbil’s Chaldean Archbishop Bashar Warda said that those who have chosen to remain in the fourth-century Monastery of St. Matthew have “expressed their faith that this is a secure place.”

He told CNA June 8 that although these Christians are now being protected by the Kurdish military, their sense of safety is not only due to the military presence.

“There is a kind of feeling that they cannot express, but they at least feel relaxed in a way that even if, God forbid, something would happen, they are in safe hands.”

The Iraqi archbishop was the main speaker at a Thursday press briefing in Rome regarding the latest developments in his war-torn country.

Although the Islamic State maintains control over much of the region after seizing the area last summer, and many people in nearby villages have fled, three monks and six students have expressed their determination to remain in the monastery.

“We can see the battles and the air strikes from here in front of us, especially at night,” Yousif Ibrahim, a monk at the monastery, told USA Today. “The sky lights up at night, but we, of course, are not scared. God protects us.”

In June 2014, the Islamic State launched an offensive against northern Iraq, overrunning the nation’s second-largest city of Mosul. In August, it further extended its reach in the regions surrounding the city. The militants have displaced hundreds of thousands of Christians, Yazidis and Shia Muslims from their homes while slaughtering or enslaving thousands of others.

The monastery, known also as Mar Mattai, was established in 363 by the hermit St. Matthew, who had fled Rome during the persecutions of the emperor Julian the Apostate. The monastery is one of the oldest Christian monasteries in Iraq. It is currently under the authority of the Syrian Orthodox Church.

Sahar Karaikos, a student at the monastery, said he is not afraid, despite the very real possibility of the monastery being invaded.

“I don’t even want to think or speak about the destruction the Islamic State would cause if they took our monastery,” he told USA Today.

Located on the edge of the conflict, St. Matthew’s Monastery risks becoming the latest Christian landmark to be destroyed by the militant group’s campaign throughout Iraq.

Archbishop Warda said the destruction of the Christian heritage is tragic, but he is more concerned with the people’s faith.

“They’ve destroyed walls and historical sites, but they were unable to destroy the faith of the community. And that’s the good news: that our people are strong enough to leave everything behind and just stay Christians.”

Many Christians have been killed since the militants began their campaign to establish a caliphate. For those who remain, martyrdom remains a possibility.

Archbishop Warda at the June 4 briefing responded to a relevant question: Is he prepared for martyrdom?

He responded: “It’s better not to think about it.”

“When it comes, my wish is just to be ready. All I wish is to be ready and to have the courageous response like my people have given. Christ is the only wish that we love.” 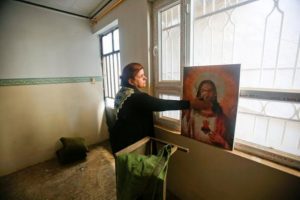 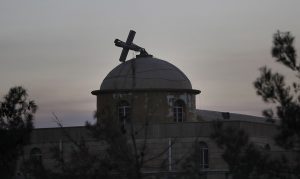 In August of 2014, ISIS militants swept through towns near Mosul, Iraq, taking control and forcing…

Most viewed articles
We Are Not Saint Mary of Egypt (But We Can Still Repent)210
Dining with Caesar165
What Does Asceticism Look Like?117
Orthodox Chapel to Be Constructed in Campina das Missoes54
Ukrainian Church Calls for De-Escalation of the Conflict in Donbass49
Archbishop of Australia Attends Commemorative Events for Battle of Crete in Melbourne46
Be Bearers of Light7
Most popular authors
Archpriest Geoffrey Korz210
Archpriest Lawrence Farley165
Pravmir.com team148
Archpriest Michael Gillis117
Metropolitan George (Khodr) of Mount Lebanon6
Maria Trushanina1