….An Image of the Trinity

These crowns have two meanings. First, they reveal that the man and woman, in their union with Christ, participate in His Kingship. Second, as in the ancient Church, crowns are a symbol of martyrdom. The word "martyr" means witness. The common life of the bride and groom is to bear witness to the Presence of Christ in their lives and in the world.
http://spot.colorado.edu/~ashtonm/owpp/marriage.html | 28 April 2007 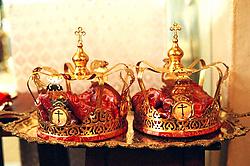 Introduction
The Sacrament of Marriage does not unite a man and a woman. Rather, it is the Church’s recognition of a union that God has already begun to work in their lives. As long as the union remains within the reality of this world, it will be subject to sin, pain, and death.  But, through the sacrament, the union enters at the same time into a new reality: that of God’s Kingdom. In Christ, marriage is restored to its initial perfection and in the sacrament, this union is made open to the possibility of what God intended marriage to be from the beginning: an eternal life of joy in union with Him.
Thus, marriage goes beyond a legal contract. There is no exchange of vows – the two have freely and coequally committed to one another and consented to God’s presence in their union. There is no phrase “’til death do us part”. If marriage is brought into the Kingdom of God, death, as a separation, is powerless over it. Christ has destroyed death by His Cross and Resurrection; therefore, the union of man and woman in Christ is eternal.

The Exchange of the Rings
The Orthodox Sacrament of Marriage actually consists of two parts: The Exchange of Rings and The Crowning.
This first part of the wedding service can be equated with the ‘civil service’. It takes place in the vestibule (entry) of the church; that area seen by the Church as the closest to the ‘outside’ world.  In this service the Church first prays for the couple.  Here the Church recognizes and blesses a union which has begun “in the world” yet awaits fulfillment in the world to come. After being blessed by the priest, the rings are placed on the right hand, the hand with which promises and/or oaths are traditionally made and the hand with which the presence of God is recognized through the sign of the Cross.  The rings, of course, are the symbol of betrothal, agreement, authority, and stewardship from the most ancient times.  The exchange of the rings gives expression to the fact that in marriage the spouses will constantly be complementing each other.  Each will be enriched by the union. The exchange of rings represents a pledge to share and exchange both their physical and spiritual goods, a pledge of eternal love and devotion.

The Procession
After the Exchange of the rings the priest leads the couple in procession into the middle of the church. The priest chants Psalm 128, “Blessed is everyone who fears the Lord, who walks in His ways…” This psalm is one of the “Psalms of Ascent” sung by Jewish pilgrims on the way to the Jerusalem Temple. This point in the service most clearly reveals the “action” of the sacrament. The couple brings themselves, each other, their lives, and all that fills their lives, to the altar as an offering to God. As the couple enters into the midst of the Church, their relationship enters into the new reality of God’s Kingdom.

Declaration of Intent and Lighting of Candles
Having processed into the church, the couple must individually proclaim, before the assembly, that they have come freely, without constraints or prior commitment, to be joined by God as husband and wife.
The bride and groom are then handed candles which are held throughout the service.  The candles represent the couple’s faith and willingness to follow the Light of Truth, Jesus Christ, and that they will have their way through life lighted by the teachings of the Church. 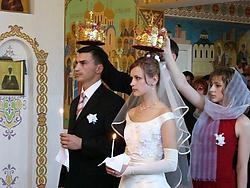 The Crowning
After prayers are offered on their behalf, the groom and bride are crowned by the priest “In the Name of the Father and of the Son and of the Holy Spirit”.  These crowns have two meanings.  First, they reveal that the man and woman, in their union with Christ, participate in His Kingship.  Second, as in the ancient Church, crowns are a symbol of martyrdom.  The word “martyr” means witness. The common life of the bride and groom is to bear witness to the Presence of Christ in their lives and in the world. Martyrdom is usually associated with death.  So the reality of God’s Kingdom in the life of the husband and wife will necessarily take the form of dying to one’s self, to one’s will, and the giving of one’s life totally to the other, and through the other, to Christ.

The Epistle
The epistle is taken from St. Paul’s letter to the Ephesians (5:20-33). It presents the cornerstone of the Christian vision of marriage: the love of man and woman parallels the love of Christ and the Church. As Christ gives Himself totally to and for His Church, so the husband is to give himself totally to and for his wife. As the Church, in turn, is subject to Christ, so the wife subjects herself to her husband. Thus the two become one in a life of mutual love and mutual subjection to each other in Christ.

The Gospel
The gospel, from John (2:1-11), is the familiar account of the Wedding Feast at Cana where Christ turns the water into wine. A person must drink water simply to survive.  Wine, on the other hand, is more than just a drink that quenches thirst and continues life.  Wine is associated with joy, with celebration, with life as being more than mere survival.  By His presence at this wedding He changes the union of man and woman into something new.  Marriage becomes more than a mere human institution, existing for whatever purpose a society assigns it.  It becomes, like the Church Herself, a sign that God’s Kingdom has already begun in our midst.

The Common Cup and the Dance of Isaiah
After more prayers, a common cup of wine is blessed and shared by the couple as a sign of their common life together, a sharing of joys and sorrows, successes and failures, hopes and fears.
This is followed by the triple procession around the center table: the Dance of Isaiah. The hymns return once more to the theme of martyrdom and union with Christ. These are the hymns that, since ancient times, the Church has used to emphasize God’s blessings.  They are the same ones sung at ordinations into clergy orders and signify that this couple has been set apart from the mundane world to live a life in Christ.
Throughout the service things are done in threes in remembrance of the Trinity.  Man is made in the image and likeness of God. Marriage is intended by God to be an image of the Trinity.  It is the union of three persons, not two.  Man and woman are one with each other and one with the person of Jesus Christ.

Removal of the Crowns
At the end of the service, the crowns are removed and the priest prays that God will receive these crowns into His Kingdom. The reality of the Kingdom into which the bride and groom have entered is not completely fulfilled, but only begun. Husband and wife must receive God’s Kingdom and make it both a present reality and a challenge and goal of their common life.  Completion and fulfillment will come when Christ returns in power and glory to complete the establishment of His Kingdom in this world by filling all things with Himself.

The Greeting of the Couple
At the end of the service, the couple stands at the foot of the altar. From the beginning, at the back of the church, they have now progressed to the forefront. Only the eternal Kingdom of Jesus Christ, as signified by the Altar, remains ahead of them. Their final act is to turn and face the assembled Church. Through this sacrament, they have become an icon of the Church and icon of Christ and the assembly comes up to congratulate them and share in their joy.