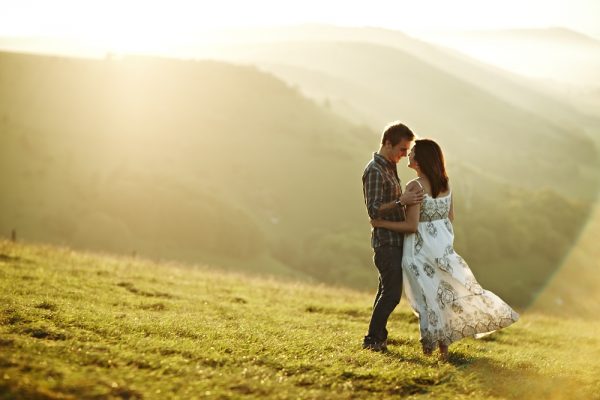 In a previous article, I argued that in the fog of the contemporary debate over sexuality, we often lose sight of the destructive prevalence of lust in our sexual relationships. Even within the canonical bounds of marriage, the presence of lust signals the tyranny of the self, and a spiritual separation from God. By reorienting our sexual desires to God, we deprive the self of its power to compel our sexuality. Sex becomes something we choose to do, an obedient response to God’s call—a divine vocation.

A very thoughtful reader wrote recently asking to expand on the practical implications of this conclusion. What does it mean, in real terms, for spouses to ‘have sex with God’s blessing,’ (as she memorably put it)?

The Eucharist offers us a useful analogy. The way in which we eat food ‘with God’s blessing’ can help us understand how to treat sex the same way.

To begin with, Christians fast in preparation for holy communion. This ascetic endeavour allows us to assert that earthly food is optional, and so overthrow the demands of the self. Since, as creatures we still require nourishment, we offer up all food (symbolized in bread and wine) to God, proclaiming that only He can satisfy us. And only then do we obey His command to “Take, eat…” and “Drink of this, all of you…”

Our Eucharistic offering thus transforms our desire for food from a compulsion of the self into a desire satisfied in obedience to the Word of God. This transformation, far from denigrating the physical act of eating, actually exalts it. No longer just a means to the end of self-gratification, the consumption of food acquires a deeper significance—our eternal satisfaction with the ‘bread from heaven.’

How does the Eucharist shed light on sexuality as a vocation? The Apostle Paul provides further insight in his pastoral instructions to the Corinthian church:

The husband should give to his wife her conjugal rights, and likewise the wife to her husband. For the wife does not rule over her own body, but the husband does; likewise the husband does not rule over his own body, but the wife does. Do not refuse one another except perhaps by agreement for a season, that you may devote yourselves to prayer; but then come together again, lest Satan tempt you through lack of self-control. I say this by way of concession, not of command. I wish that all were as I myself am. But each has his own special gift from God, one of one kind and one of another. (1 Cor. 7:3-7)

This passage has typically been interpreted to mean that St. Paul would prefer everyone to be celibate, but makes a ‘concession’ to marriage for those who are unable to contain their lust and are in danger of ‘burning with passion.’ (1 Cor. 7:9) However, another reading is also possible. While the Apostle does indeed prefer celibacy for himself, and recommends it to the unmarried or widows, (1 Cor. 7:8) he is clear that it is not a gift given to everyone. (v. 7) Nowhere does he say that conjugal relations are a lesser good than celibacy. Both celibacy and sex within marriage are gifts, and St. Paul makes no distinction at all between the qualities of each gift; they are different in kind, but equally ‘special.’

The Apostle’s ‘concession,’ then, does not refer to his reluctance about conjugal sex, but rather his reluctance to allow spouses to unilaterally refuse conjugal rights to each other. If a husband and wife want to abstain from sex ‘for a season’ of prayer (such as Lent), they must do so ‘by agreement,’ that is, as a free choice rather than under compulsion. Otherwise, they are called to give themselves to each other in mutual submission as a rule.

This reading of St. Paul allows us to understand his view of sexuality as a divine vocation. Christian spouses’ abstinence from intercourse for the purpose of prayer is a sexual equivalent of Eucharistic fasting, and accomplishes the same spiritual goal: to deny the imperatives of the self and to orient our desires to God. And just as fasting prior to the Eucharist is a way of demonstrating that the consumption of earthly food is purely volitional, so too spouses’ conjugal fasting should be freely chosen, and not prescribed.

When they choose not to abstain, however, Christian couples should engage in regular conjugal relations. Again, their obedience to one another, like eating only when the Lord’s commands it, serves to heal their lustful desires by orienting them away from the object of their human partner, and towards the heavenly Bridegroom. And as with all food in the light of the Eucharist, conjugal relations within sacramental marriage transforms all human sexuality into the signifier of God’s desire for humanity, and ours for Him.

This understanding of sex as vocation has radical practical implications for conjugal relations in sacramental marriage today. Our challenge as spouses is to both abstain from sex more intentionally, and engage in it more dutifully and obediently. This is contrary to our contemporary culture, in which abstinence is often imposed, while sex is something we do only when we’re ‘in the mood.’ In either case, self-centred desire continues to tyrannize us. As long as we do not choose abstinence, we are deprived of the opportunity to say ‘no’ to lust. And because we only have sex at the whim of the self (with a self-gratifying orgasm in mind), we deny ourselves the possibility of signifying our sexuality’s highest purpose, which is to ‘speak of’ the union between Christ and His Church. (Ephesians 5:32)

To transform our conjugal relations into a divine vocation, we need to reverse these often-ignored lustful tendencies in marriage. We need to become more intentional in agreeing to periods of volitional abstinence from sex for the purposes of more intense prayer. But, having agreed on periods when we will not have sex, we also need to exercise more diligence in ‘coming together’ regularly, as a rule, simply as an obedience, even if we do not ‘feel like it.’ Only then can we signify in the joining of our bodies the higher calling of sexual intimacy, which St. Maximos calls ‘the blessed passion of holy love.’

Consider the following situation: you are shopping at the grocery store when you notice a young couple in…