Another Kind of Mission 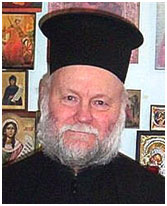 ‘Do you mind me asking, what are you?’ So said the young woman in the shop. I did my best to briefly reveal Orthodoxy to her. It didn’t end up looking like her Road to Damascus; but it did leave her thinking, and I thought that her thanks were sincere.

‘All the great wars of history are caused by religion!’ We were trapped on a plane, so I couldn’t ignore the remark. I pointed out that as far as I could remember from my childhood, when we were crouching in an air-raid shelter being bombed by Adolf Hitler, and the people in Russia were suffering even more; Hitler was not a devout Bavarian Catholic, and Stalin was not a lifetime enthusiast for Orthodoxy. I didn’t go on with the argument, but I’m pretty sure that that guy stopped mouthing the clichés he had been taught by the media, and started to think for himself.

‘My parents are Jehovah’s witnesses’, said the lad changing my tyres, what do you believe?’ Again, I had to be brief, but unless I entirely misjudged the effect of my reply, that young man will not see Orthodoxy as a Bible thumping, legalistic creed.

I could go on with many other examples of where I have been given the opportunity to be a missionary for our Faith; and they all cost nothing. No adverts in newspapers, no alpha course events, no appearances on local TV, no committees, strategies, or mission statements. Just one simple thing; I wear my black antiri and cross in public.

And our laity? What can they do? Well, making the sign of the cross before eating a meal in public could be a start; especially at those smart social occasions with skeptical friends.

Doing such things can sometimes require a social courage which we do not always have, and we remember how Peter’s denial of his Saviour brings tears to our eyes when the Gospel is read during Holy Week. But are there no occasions when we can try?