Apostles of the Seventy Archippus and Philemon, and Martyr Apphia Commemorated Today 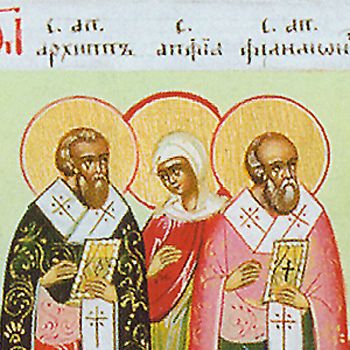 Saint Archippus was bishop of the city of Colossae in Phrygia. Saint Philemon was an eminent citizen of this city, and the Christians gathered in his home to celebrate church services. He was also made a bishop by Saint Paul and he went about the cities of Phrygia, preaching the Gospel. Later on, he became archpastor of the city of Gaza. Saint Apphia, his wife, took the sick and vagrants into her home, zealously attending to them. She was her husband’s co-worker in proclaiming the Word of God.

During the persecution against Christians under the emperor Nero (54-68), the holy Apostles Archippus and Philemon and Apphia were brought to trial by the ruler Artocles for confessing faith in Christ. Saint Archippus was brutally slashed with knives. After torture, they buried Saints Philemon and Apphia up to the waist in the ground, and stoned them until they died.

With your whole heart you followed the way of holiness / and became a companion of the Apostles, O Archippus. / By your word you preached the Faith, / and by your life you uprooted evil. / Having proved steadfast in contest you were granted the crown of righteousness.

The Church has gained you as a great star, O Archippus, / and enlightened by the rays of your wonders it cries out to you: / “Save us, who with faith honor your memory.”