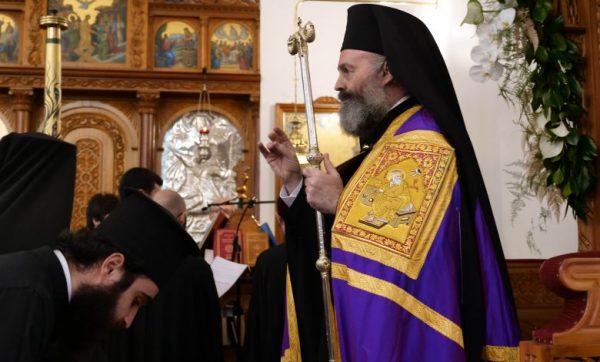 The Great Hierarchical Vespers on the feast of St. Makarios of Egypt, a feast on which Archbishop Makarios of Australia celebrates his name day, was officiated on the afternoon of Tuesday, January 18, at St. Spyridon’s Church in Kingsford, NSW.

Archbishop Makarios of Australia presided over the service, along with their Graces, Bishop Christodoulos of Magnesia, Bishop Eumenios of Kerasounta, and many priests of the Holy Archdiocese from Sydney.

During the Vespers, the Archbishop of Australia tonsured young Emmanuel Giannopoulos as a Reader of the Holy Church. As he distinguished, Emmanuel is a member of the Parish of St Spyridon who has rich gifts. “Your whole life must be a letter, which the others will read and will be led to Christ”, the Archbishop of Australia pointed out to the new Reader, wishing his tonsure to be the beginning of his course to the priesthood.

During his sermon, the Archbishop of Australia briefly referred to the life of St. Makarios of Egypt, who acted in a difficult time for the Church, a time that was full of great heresies, especially the sect of Arianism. Saint Makarios fought vigorously against Arianism, as the Archbishop explained; he was exiled by an Arian Patriarch of Alexandria where he fell asleep in the Lord in the Island of Neilos.

The Archbishop referred to the rich literary work left by the revered Saint, which he characterized as “a source of spiritual life, wisdom, and enlightenment” and analysed a didactic story, which describes the conversation of Saint Makarios with a skull of a dead man in the desert. This skull belonged to a high priest of idols and the conversation with Saint Makarios highlights the loneliness that a person experiences when he is away from God and other people. Furthermore, it highlights the great privilege that the Orthodox Church has, the privilege of community and communion, as the Archbishop pointed out.

“We Orthodox Christians live in communion,” he stressed, “in communion upwards with Christ and in communion with those around us, with our neighbor.” “If we think,” he pointed out, “that we will be able to follow a crooked path to reach the Kingdom of God and if we think that we can follow a path which has despised our brother, neighbor, relative, friend, even the enemy, then we are not Orthodox Christians or we have not understood correctly what the Orthodox Church and Orthodox spirituality mean”.