Source: Aid to the Church in Need (ACN)
"At present about 120,000 Christians are living in Iraq as refugees. They need everything because the ISIS terrorists have taken all they had".
Oliver Maksan | 22 September 2014 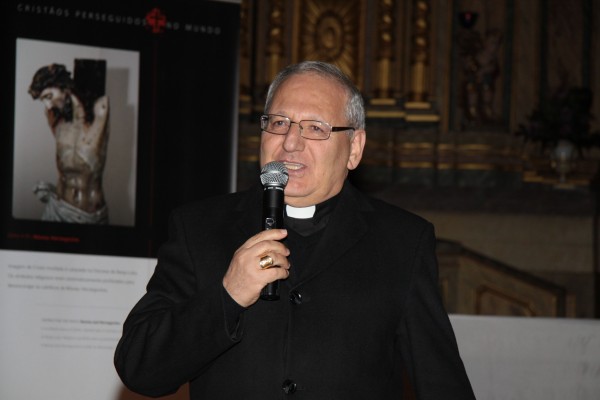 “We Christians in Iraq have a future if the international community gives us immediate assistance. Don’t forget us.” With these words the Chaldean Patriarch Mar Louis Raphael I Sako addressed the community of nations on Tuesday while talking to the Catholic charity Aid to the Church in Need (ACN). The Patriarch was talking on the occasion of a conference on the question of Christians in the Middle East, which was held with financial support from ACN on the fringe of the plenary session of the UN Human Rights Council in Geneva. “People are disappointed how little help has been received to date.” The Patriarch continued: “At present about 120,000 Christians are living in Iraq as refugees. They need everything because the ISIS terrorists have taken all they had. The greatest challenge at the present time is the provision of living accommodation. The winter, which can be very cold in Iraqi Kurdistan, is coming and the people can’t possibly stay in tents. We rely heavily on support here.”

In his remarks to the conference participants, Louis Raphael I made a call to set up a protection zone for Christians in Northern Iraq. This should, he said, be placed under a United Nations mandate and should be set up with major involvement of Iraq’s neighbour states. “We need a resolution of the United Nations which will enable us to return,” the Head of the Chaldean-Catholic Church said. Sako warned that if the Iraqi Christians are not able to return to their places of origin in the Niniveh Plains near Mosul, they will face the fate of the Palestinian refugees, who have lived scattered over many countries.

Mosul’s Syriac-Orthodox Archbishop Nicodemus Daoud Sharaf said before the conference that the United Nations must recognise and condemn the expulsion of the Christians in Iraq as genocide. “The United Nations are quick to condemn anti-Semitism. We want to see the same when Christians are persecuted.” He was pleased about the visits of western politicians to Iraq. “But we need genuine humanitarian aid. Time is a major factor for us. More and more people are leaving the country.”

The Syriac-Catholic Patriarch Ignace III Yousif Yunan, a resident of Lebanon, also made a call at the conference for a greater commitment on the part of the international community. “With the capture by ISIS of Syriac-Catholic towns such as Qaraqosh tens of thousands of my faithful are fleeing. Aid from the international community would not only help them materially, but also show them that they are not alone and not forgotten.” The Christians of the Middle East were too few and too poor to attract the interest of the industrialised nations, the Church leader continued.

Patriarch Ignace also stressed that in the long term the Christian presence in the Middle East could only be guaranteed by separating state and religion. “As an international family we must work towards the separation of state and religion.” In this connection he called on Muslims to reinterpret their Holy Scriptures. “In the 21st century one cannot make an exegesis as though one were in the 7th century.”

Archbishop Sharaf criticised the inadequate reaction of Muslims to the actions of ISIS. “When the Mohammed cartoons were published a few years ago in Denmark, millions of Muslims took to the streets worldwide because this was something that was against Islam. ISIS is also seen as un-Islamic. But where are the demonstrations against it?”

The conference “Christians in the Middle East: Citizenship, Human Rights and their Future”, organised by the Vatican representation at the UNO in Geneva and held at the UN Human Rights Council in Geneva, was attended by delegations from the United States, Great Britain, Poland and Austria. Subsequently US Ambassador Keith Harper also received a delegation of Iraqi Church representatives for discussions.

Directly under the Holy See, Aid to the Church in Need supports the faithful wherever they are persecuted, oppressed or in pastoral need. ACN is a Catholic charity – helping to bring Christ to the world through prayer, information and action.
The charity undertakes thousands of projects every year including providing transport for clergy and lay Church workers, construction of church buildings, funding for priests and nuns and help to train seminarians. Since the initiative’s launch in 1979, Aid to the Church in Need’s Child’s Bible – God Speaks to his Children has been translated into 172 languages and 50 million copies have been distributed all over the world.
While ACN gives full permission for the media to freely make use of the charity’s press releases, please acknowledge ACN as the source of stories when using the material.

On Line donations can be made at www.aidtochurch.org

Bright colours amidst of the grey of destruction: children and young people have now painted one of the…