Source: Assyrian International News Agency
Bright colours amidst of the grey of destruction: children and young people have now painted one of the streets in the war-afflicted old city of Homs. On house walls they expressed in brilliant colours what moves them and what they hope for.
Oliver Maksan | 19 July 2015 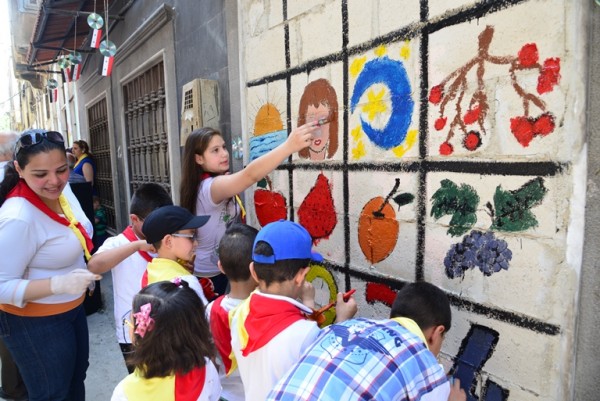 Syria, May 2015 Homs, the Christian quarters, street event prepared by scouts. The children made graffiti on the walls of the destroyed houses and call this street: "Street of Hope". Photo: http://www.churchinneed.org/

“The aim is to bring hope and joy back into our city,” Father Lukas Awad of the Syriac Orthodox Church explained. “Young people from our parish had the idea. They invited children from all over Homs. They wanted to bring some joy into the little ones’ lives and encourage the parents to return to the old city.”

Homs had had a large Christian community before the Syrian war broke out. Many Christians lived in the old part of the city with its many churches in particular. The Christian presence here goes right back to the 1st century. The famous Saint Mary Church of the Holy Belt is even said to have its origins in the year 50 AD. But in February 2012 the increasingly brutal Syrian war also reached the strategically important city of Homs. The Christians fled from the old city. Only a few remained after rebel groups had conquered the area. The majority sought refuge in other parts of the city or left the area completely. In the middle of 2014 government troops then also regained control of the old city. But the destruction is still evident.

“The young people’s aim was to encourage Christians to return to their houses in the old city despite the destruction,” Father Lukas explained. “And they were successful in this. Following this project many came back, especially to the painted street.”

Dozens of families had since been inspired by this initiative, the priest continued. “And every day one or two new ones join them.” Many families had seen pictures of the project on the television and had decided to return to their old home. “After all, the area is safe,” Father Lukas added. “The infrastructure is also working, to some extent at least. We get electricity for three hours and then we are without again. But that’s OK. The main problems are the major destruction of the houses and the lack of work. Furthermore everything’s terribly expensive, including construction material. We, as a Church, do everything we can. Specifically, repairing the dwellings is a matter of priority for us.”

But in spite of the progress made, there is as yet no end to the war and its dangers. The people of Homs were reminded of this when the terrorist group “Islamic State” conquered the town of Palmyra. Or when the Catholic priest Jacques Mourad was abducted at the end of May. “When Palmyra was taken, all the Christians fled from the town. And after the abduction of Father Jacques, Christians left Al-Qaryatayn. They’re all afraid of IS. And the people of Homs are also in the grip of this fear. They are afraid that the war will return.” One family had therefore postponed their return to the old city of Homs. They were waiting to see how things developed.

But Father Lukas doesn’t despair. “As Christians we trust in God. We must be confident despite the suffering. For our Lord Jesus Christ said: Fear not for I am with you.” Father Lukas reports that the people were praying a lot. And the fact that bishops, priests and those in religious orders had never left the side of their communities even in the worst times had strengthened faith in the Church. “We as a Church are doing everything we can to strengthen our faithful spiritually, as well as materially.”

To encourage people further, Father Lukas has now launched a project for a children’s playground. The intention is to open it in July. Aid to the Church in Need is supporting him in this. “Without the benefactors we wouldn’t be able to achieve anything. We thank them from the bottom of our hearts. They can rest assured that we will pray for them. May the Lord reward their generosity.”

As in Homs, the Christians in Maaloula are also finding new courage. “More and more people are returning to Maaloula. We are very grateful for this,” reports Father Toufic Eid of the Greek Catholic Church. Forty to fifty per cent of the people have returned to Maaloula to date. They had fled the war to other towns in Syria or had sought safety in the neighbouring country of Lebanon. Maaloula: this is most ancient Christian soil. In this town to the north of Damascus people still speak Aramaic, the language of Jesus. The visual impression of the town is largely determined by numerous churches and monasteries. In September 2013, however, Maaloula was conquered by rebels. “They were jihadists. The people fled from them. They immediately murdered three young men and made them into martyrs. They also wasted our churches. They destroyed icons. Some of these have bullet holes in them. Others were evidently destroyed using tools.” The hatred of Christians was also aimed at the statue of the Virgin Mary situated high above the town. It was blown up without further ado by the jihadists.

Once the rebels had been driven out of the town by the government army in April 2014, however, the work of reconstruction was started. Symbols are important here. For instance, in the middle of June a new statue of Mary was erected to replace the one that had been destroyed. “That gives people much hope. After all, this statue is a landmark of our city.” Recently the bells which the jihadists had stolen were also returned. They had been found in Lebanon. “Unfortunately the bell frames were damaged. Not all the bells that have been returned can be used at the present time. But it does people good to know that they are back.” The damaged churches are also being taken care of. “In our Church of St. George the icon wall was completely burnt. We have carried out the most important repairs to the church. But we have no money for new icons or to restore the old ones. The crucial thing now is to give the people somewhere to live. The security situation is good. As is the infrastructure. But the problem of living accommodation is the crucial one. Most of the houses in our town have either been damaged or completely destroyed. If we want people to return, we have to start with this. The people are very attached to their home. This is a great source of energy for them.”

But despite the vigour evident in the reconstruction work the basic problem has not been solved. “Even though we may be secure for the time being, we know that the situation can change at any time,” the priest says. “Even now you have to pass through dangerous areas if you want to get to Damascus.” Father Toufic is therefore realistic. “I promise the people nothing I can’t deliver. I tell those who want to return and stay that they must be prepared to bear the cross with Jesus. But it is important that we, as the Church, not only talk, but also help people and stay with them. This is the most important thing. The rest is on God’s hands.”

"At present about 120,000 Christians are living in Iraq as refugees. They need everything because the ISIS terrorists…