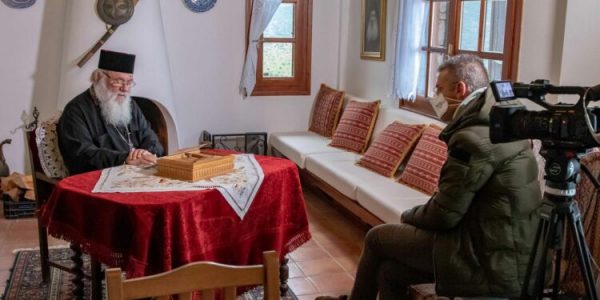 “We all know that the life of the human being and the world is the Creator’s greatest gift on earth, it is the breath of every human being and the humankind,” said Archbishop Ieronymos of Athens in a message he sent to the faithful on public television, reports Orthodox Times.

As he pointed out, “We all know that the human being was commissioned by his Creator to be the one who not only will receive but also will guard with loyalty the divine gift of life on our planet.

I am keenly observing the efforts of our doctors with emotion. I wish them much strength and health, I wish our faithful courage.”

“I would like to call on all devout believers to protect the sanctity and continuation not only of their own lives but also of those of their fellow human beings, and especially of the vulnerable groups of faithful.

After all, the common prayer in the liturgical life of the Church always mentions with particular emphasis on those who cannot attend it for serious health reasons or for any other justifiable reason,” said Archbishop Ieronymos.

He recalled that the decision made during the extraordinary meeting of the Standing Holy Synod regarding the coronavirus outbreak “had already proactively given her due attention to this subject in order to allay the common fears of the devout Greek people regarding the unpredictable, dangerous and invisible threat.

In this spirit, the Holy Synod decided to call on the devout believers to temporarily avoid the mass gathering at the churches and urged them to pray at their home in order to avoid exacerbating the situation.”

In his message, the Archbishop of Athens underlined, “Human being was commissioned by his Creator to be the one who not only will receive but also will guard with loyalty the divine gift of life on our planet.

In the context of the Divine Providence of the Creator, both the incarnation of Christ and the founding of His Church were incorporated to restore the harmonious relationship of man not only with his Creator but also with all divine creation in order for the world to live.”

Metropolitan Hilarion of Volokolamsk, Chairman of the Department for External Church Relations of the Moscow Patriarchate, spoke about…

Being aware of your sins is already the greatest value, said His Holiness Kirill, Patriarch of Moscow and…

Being of One Mind: What It…

One of the themes that resounds throughout St. Paul’s epistles is the…

They rescued children on the highway, helped an ambulance and sheltered strangers.

Most viewed articles
Healing the Inner Pharisee157
Our Unity in Christ100
Patriarch Theophilos III of Jerusalem: Our Common Commitment is to Gather for Prayer and Fellowship72
Metropolitan Hilarion: Christians in the Middle East and Other Countries Need Both Our Support and Prayer55
How Ural Residents Survived a Blizzard45
Being of One Mind: What It Is and Isn’t31
Most popular authors
Archpriest Stephen Freeman157
Pravmir.com team127
Abbot Tryphon100
Irina Sycheva45
Archpriest Michael Gillis31