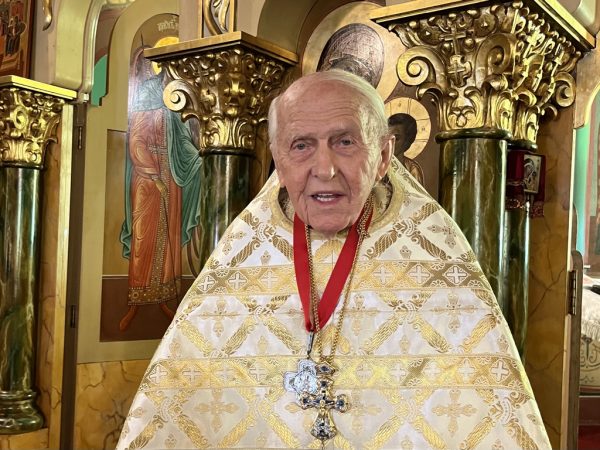 His Beatitude Metropolitan Tikhon, and Archpriest Joseph Lickwar, Chancellor of the NYNJ Diocese and Rector, Saints Peter and Paul Cathedral, Jersey City, NJ, had both been planning to attend, but changes in their schedules required them to be elsewhere that day.  Archpriest Stephen Kopestonsky, Retired, and Archpriest Serge Lukianov, Rector, Saint Alexander Nevsky Cathedral, Howell, NJ, also had to cancel their attendance due to last-minute changes in their schedules.

Archbishop Michael’s sermon focused on the life and responsibilities of a priest, the sacrifices required of any man who answers this high calling to continue the work of the apostles, and the need for our prayers — for Father Paul, who has turned “100 years young” with the “glory of the priesthood radiating from his very soul” — and for every priest, every day, to support them in the challenges they face.  At the conclusion of the majestic service with responses sung by a full beautiful choir, on behalf of Metropolitan Tikhon, Archbishop Michael presented Father Paul with a Grammota signed by His Beatitude and all members of the Holy Synod of Bishops of the OCA, expressing their “Archpastoral gratitude by invoking God’s blessing” upon Father Paul for his 75 years in the Holy Priesthood and his 100th birthday.  On behalf of the NYNJ Diocese, His Eminence presented Father Paul with a palitsa and two grammotas, commemorating Father Paul’s 100th birthday and his upcoming 75th anniversary of ordination to the Holy Priesthood (Dec. 28, 2022), and a third grammota to both Father Paul and Matushka Mary for their upcoming 75th wedding anniversary (Nov. 27, 2022).

Everyone proceeded to Daria Hall next door for a festive luncheon filled with toasts, the singing of “Many Years” and “Happy Birthday,” formal speeches by His Eminence and Father Chad, and an open microphone session.  Guests were treated to a slide show of photos of Father Paul, starting with childhood to the present day, some of which are included in the colorful program booklet. The booklet also includes “Reflections on My Priestly Life,” by Father Paul, a chronology of important dates in his life and ministry, as well as links to other articles about Father Paul and Matushka Mary and the video interviews with them — part of the “Gift and Grace” oral history series created by Archpriest John Shimchick.

Father Daniel Skvir kept the program moving along as the Master of Ceremonies, introducing the speakers but also interjecting his own personal remarks and anecdotes about his long-time friend, Father Paul, as well as Matushka Mary.  Archbishop Michael personally congratulated Father Paul on his 100th birthday and “Diamond Jubilee Year” of his Ordination, and expressed his thanks to Almighty God for Father Paul’s 75 years of dedicated service to Christ and His Holy Church.  Father Chad lauded Father Paul as a “legacy” who taught and inspired generations of priests at Saint Vladimir’s Seminary.  Notably, Father Paul is the oldest living Seminary alumnus and also the longest-serving Seminary Trustee, now Trustee Emeritus.

Father Paul then took the podium.  He began by giving thanks to God for his many blessings — the gifts of long life, Godly parents, a wonderful wife, good and helpful children, higher education, the gift of ordination to the Holy Priesthood, and the ability to continue his service in the Church for these 75 years.  He recounted highlights of his upbringing by humble immigrants who were faithful churchgoers in Olyphant, PA, his decision to attend seminary and become a priest, his successful mission finding “a wonderful girl to marry” – Mary Obletiloff, adding humorous anecdotes.  He also reviewed some of the changes in the world during his lifetime, and expressed his heartfelt gratitude to everyone who has touched his life in a positive way, concluding with a favorite verse from a gospel hymn:  “This is my story, this is my song, praising my Savior, all the day long.”

During the open mic portion, numerous parishioners, friends, and family members shared warm and loving remembrances and gratefulness for Father Paul’s love and dedication as a pastor, friend, father, and uncle.