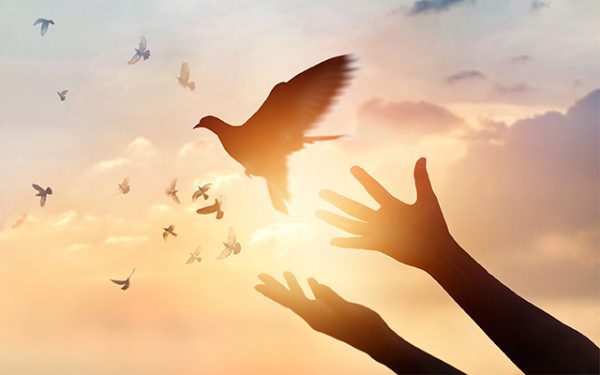 Apollo was a shepherd, and had been hardened by his rough life. One day he saw a pregnant woman alone in the field, and was seized with curiosity to know how the unborn child lay in the womb. So he killed her; there was no one there to help her. He opened her body and looked upon the dying child.

This is a saint story, believe it or not. Apollo was immediately overwhelmed with grief and horror. He went to the desert monks who lived at Skete (in Egypt) and confessed his awful sin. He could hear the monks chanting, “The days of our years are threescore and ten, or by reason of strength four score, yet they are filled with labor and trouble.” (Ps 89:10). He said, “I am forty years old and I have not offered one prayer in my life. Now, if I live another year, I will not cease praying to God that he will forgive my sins.”

So Apollo joined the monastery and spent the remainder of his life praying, “I, as a man, have sinned; but do you, as God, forgive.” In time he came to believe that God had forgiven him for the woman’s murder and his other sins, but he doubted whether God could ever forgive the death of the child. One of the old monks told him, “God has forgiven you even the death of the child, but he leaves you in mourning like this because it is good for your soul.” St. Apollo is now numbered among the Desert Fathers.

When we consider the weight of any sin, it’s repentance that makes the difference, isn’t it? Apollo’s sin is horrifying, yet his penitence was profound, and he spent the rest of his life begging God’s forgiveness. Though it is a disturbing story, we recognize in its outline something familiar to Christian faith. It is a dramatic illustration of the infinite reach of God’s forgiveness.

The world doesn’t think like the Church, when it comes to sin and forgiveness. The legal code makes innumerable fine distinctions to designate the exact penalty for each shade of transgression of the law. Small crimes have small penalties, great ones have great penalties. So someone who has broken an earthly law is naturally disposed to minimize what he has done; he may blame others, make excuses, or just plain lie about it. If the law calculates a precise penalty for each transgression, the natural human response is self defense.

But the Christian “calculation” works in an entirely different way. Forgiveness is correlated with repentance, because it is not objective Law that we must uphold, but rather a relationship we must heal. Imagine that you accidentally did something that hurt someone you care about. If you reacted by trying to figure out what that hurt would cost in dollars and cents, and mailing a check, it may well make things worse. Heartfelt apology, even when there is no way to make restitution, is what heals a relationship.

A person in prison has every reason to think the way the world thinks, and go on denying guilt and defending himself. Thinking in terms of repentance and forgiveness doesn’t come naturally. It’s an insight, a spiritual insight, and it must be taught. Who will reach these prisoners and teach them the path of repentance?