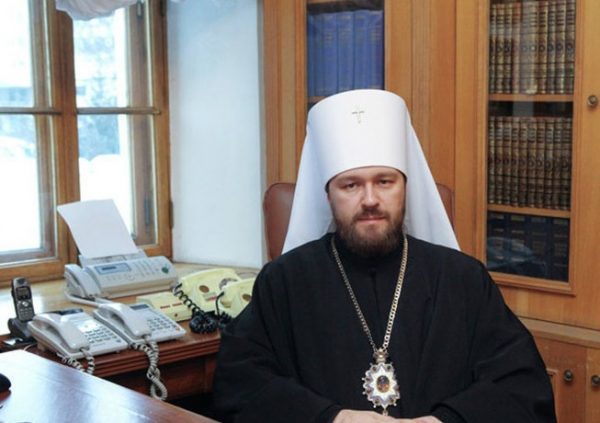 Metropolitan Hilarion, Chairman of the Department for External Church Relations of the Moscow Patriarchate, answered questions from viewers on the television program “The Church and the World” on May 16, 2020.

Met. Hilarion: In Christianity there is no such thing as a teaching about three gods. Christians believe in one God — the Creator of heaven and earth. When Jesus Christ sent His disciples to preach, He told them: “Go therefore and make disciples of all nations, baptizing them in the name of the Father and of the Son and of the Holy Spirit” (Matthew 28:19). Even before that the three persons of the Holy Trinity were revealed to the people when Jesus Christ was baptized in the Jordan by John the Baptist. At that time the people heard the voice of God the Father Who said: “This is My beloved Son, with whom I am well pleased” (Matthew 3:17). They saw how the Holy Spirit descended upon the Son of God after He had come up from the water. The Three Persons of the Holy Trinity are not three gods, this is One God, Who consists of three hypostases’: Father – God, Son – God, Holy Spirit – God. However, together they are not three gods, but One God in three hypostases.

Met. Hilarion: Holy Scripture does not call upon us to go with the flow, for the Lord says: “Blessed are the poor in spirit, for theirs is the Kingdom of Heaven” (Matthew 5:13), and according to the commentary of the holy fathers “poor in spirit” are people with humility. Very often humility is completely misunderstood. The philosopher Friedrich Nietzsche sharply criticized Christianity for its teaching on humility. He said that Christianity allegedly encourages the spirit of slavery while people are called to freedom. Actually, the Apostle Paul said to the Christians: “For you were called to freedom, brethren” (Galatians 5:13).

No one ever taught that Christianity was some kind of religion of slavery. However, how do we understand freedom from the Christian point of view? Freedom, above all, is an internal freedom: from sin, from dependency, from the passions. After all, very often people who live freely however they please in actuality become slaves to various passions. Christianity helps the person to become liberated from these passions, from these dependencies and from creating one’s well-being based on worldly goods and the acquisition of worldly possessions.

If we speak about humility, it does not mean to bow your head down very low, say some special words, and to speak in a quiet and ingratiating voice. Some think that this is humility. However, the fact is that humility consists of the recognition of the distance between yourself and God, seeing the difference between how you actually are and how God would like you to be. If one recognizes this, if one lives with the constant feeling of God’s presence, then in a natural way humility will become part of one’s inner world, part of one’s inner state.

Humility in no way means to go with the flow. It does not mean to be passive when confronted with evil and unrighteousness. On the contrary, the Lord says: “Blessed are those who hunger and thirst for righteousness, for they shall be satisfied” (Matthew 5:6). The struggle for righteousness in this world is inevitably fraught with the fact that you have to go against the flow. For the Christian, everything can be accomplished with humility, even when one struggles for righteousness and defends one’s point of view and still be able to maintain one’s inner peace and inner humbleness.

Question: In the Gospel of Luke it says: “If your brother sins against you, rebuke him; and if he repents, forgive him.” Question: What if he doesn’t repent? Why and for what purpose is such a disclaimer added – “if he repents”?

Met. Hilarion: In the Gospels there are sayings of our Lord Jesus Christ which are expressed in various ways on this subject. Perhaps our Lord Jesus Christ gave various answers to this question. In the Gospel of Luke it definitely says: “If he repents, forgive him.” “And if he sins against you seven times in the day, and turns to you seven times, and says, ‘I repent,’ you must forgive him” (Luke 17:3-4). Wherein the Gospel of Matthew offers a slightly different variation with the answer to a similar question by the Apostle Peter, who asked: “How often shall my brother sin against me, and I forgive him? As many as seven times?” Christ answered: “I do not say to you seven times, but seventy times seven” (Matthew 18:22). In other words, it is necessary to forgive an innumerable number of times. In this instance there is no kind of disclaimer “if he repents” or “if he asks forgiveness” — simply one must forgive.

Of course, there are different kinds of situations. One situation is if someone has offended you and asks forgiveness. Of course, according to the Christian point of view we must forgive. However, many situations occur when the person has offended us and does not ask for forgiveness. Nonetheless, this does not mean that we are not required to forgive him. The Christian is called to always forgive everyone and never to harbor hatred or anger towards anyone. If we see that someone commits a sin, we must separate the sin from the person himself. It is the same thing with a physician. When someone suffering with illness comes to him, he doesn’t receive him merely as a sick person, but tries to do everything possible in order to separate the illness from the person, that is to say, to heal him. It is the same with our Christian relationships. By means of humility and forgiveness we can heal someone who is ill, who has offended us.

I would like to conclude this broadcast with the words of our Lord Jesus Christ from the Gospel of Mark: “And whenever you stand praying, forgive, if you have anything against anyone; so that your Father also who is in heaven may forgive you your trespasses” (Mark 11:25).

I wish all of you all the best and may the Lord keep and save you all!