Babylon and the Trees of Pentecost

The first time I saw trees in an Orthodox Church was at St. Tikhon’s Monastery in Pennsylvania, just after Pentecost Sunday. I was completely caught off guard. Though I had been in a number of different Churches over the years, I had never been in a parish of Russian background for the feast of Pentecost. Thus I had missed the Slavic practice of bringing trees into Church for the feast of Pentecost. It was wonderful – like going into Church only to find a forest.
Archpriest Stephen Freeman | 06 June 2009

From the Feast of Pentecost

The arrogance of building the tower in the days of old

led to the confusion of tongues.

Now the glory of the knowledge of God brings them wisdom.

There God condemned the impious for their transgression.

Here Christ has enlightened the fishermen by the Spirit.

There disharmony was brought about for punishment.//

Now harmony is renewed for the salvation of our souls.

The first time I saw trees in an Orthodox Church was at St. Tikhon’s Monastery in Pennsylvania, just after Pentecost Sunday. I was completely caught off guard. Though I had been in a number of different Churches over the years, I had never been in a parish of Russian background for the feast of Pentecost. Thus I had missed the Slavic practice of bringing trees into Church for the feast of Pentecost. It was wonderful – like going into Church only to find a forest.

My Western background left me completely unprepared for this Eastern take on the feast of the gift of the Spirit to the Church. In Western Churches, Pentecost particularly focuses on the “fire” of the Holy Spirit lighting on the disciples in the upper room and the “empowerment” of the Church for mission. Traditionally in the West, the color of the feast is red (for the fire).

In the East, the color of the feast is green – which is also the color worn for the feast days of monastic saints.

In the West, green is the “ordinary” color worn in the “in between” Sundays and weekdays of the Calendar. For the Orthodox, gold serves this function.

But I found myself in the midst of trees on a major feast that was “green.” I was simply baffled. 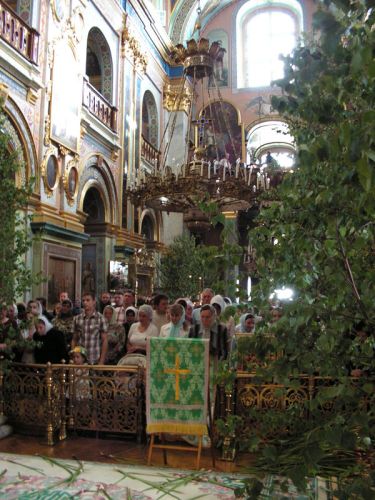 In Russian practice the feast is normally referred to as the feast of the Trinity (Troitsa) rather than Pentecost, or “Pentecost” is listed as an afterthought (Pentecost). It is obvious that something quite different is at work in the understanding of the feast day.

Both East and West keep the feast as the day upon which the Holy Spirit descended on the Apostles. Orthodoxy does not ignore the various tongues with which the Apostles began to speak as they announced the gospel to those assembled in Jerusalem. However, as noted in the verse quoted at the beginning of this article – those tongues are seen as a spiritual counterpart to the confusion of the tower of Babel, when men in their hubris sought to build a tower into heaven. The tongues which came upon them only proclaimed darkness and confusion and brought to an end the last great ecumenical effort of humanity.

The Church is God’s vision of united mankind – a union achieved through the gift of God and not by human effort. It is a union which maintains a diversity of sorts (the languages do not become one “super” language – so much for the “unity” of Latin) but a diversity whose unity is found in true union with the one, living and true God. The gospel proclaimed by the apostles on the day of Pentecost, though preached in many languages, was one and the same gospel.

One may still wonder why the feast becomes a feast of the Trinity. Like the feast of Theophany (the Baptism of Christ), Pentecost is a feast in which the revelation of the Holy Trinity is made manifest. The Spirit is the gift of the Father – given through the Son. There were many centuries that passed before a parish was named for the Trinity.

Among the first within the Orthodox world was the Lavra (Monastery) of the Holy Trinity outside of Moscow, founded by St. Sergius in the 14th century. His vision of the common life was seen as an earthly icon of the Divine Life of the Holy Trinity in which each of the Divine Persons shared a common life. The monastery was itself a place of spiritual rebirth for the Russian land as it began to come out from under the oppression of the Tatar yoke. The spiritual life of Holy Trinity monastery was a spiritual awakening for the land when Russians remembered that they were brothers of one another and shared a common life. This common life became the strength that allowed them to assert their freedom.

Of course, all of the above is both interesting and true but has yet to explain the trees. The Jewish feast of Pentecost (fifty days after the Passover) marks the beginning of the harvest feast. The first-fruits of the harvest are brought to the temple to be blessed of God. For Christians the harvest that is sought is the harvest of a renewed humanity and the renewal of creation. Thus the trees are a representation of the created order, assembled together with the people of God, awaiting and receiving the gift of the Spirit through whom everything is made new.

It is a very rich feast – one that is filled with meaning (as is appropriate). But all of the meaning takes as its source the gift to creation of the “Lord and Giver of Life,” the Holy Spirit. Just as we are told in Genesis:

In the beginning God created the heavens and the earth. The earth was without form, and void; and darkness was on the face of the deep. And the Spirit of God was hovering over the face of the waters.

With a word, God speaks, and where the Spirit hovered, life comes forth.

So it is in the life of the Church and in creation today. Where God speaks, renewed life comes forth. All of creation groans and travails, awaiting the final great Word that will signal the renewal of all things.

For now, we see that promise foreshadowed by trees in Church and green on the priests and by the joy of our hearts.

St. Isaac stretches love and mercy to it’s farthest limits, occasionally beyond the bounds of canonical understanding. He…

The Collapse into Chaos – Where Only God Makes Sense

Nothing is more traumatic than the onset of chaos. Predictability breaks down, goodness seems to disappear, and the…

Music to Die For

Living in the South, I am confronted with the reality of American Country music whether I want it…

Most viewed articles
Hallowed Be Your Name: Some Grammar and A Reflection248
How to Read the Bible148
Seven-day celebrations dedicated to the Saint who helped Bucharest during plague epidemic begin on Thursday105
Patriarch Kirill Encourages the Media to Report Proper and Adequate Information about the Church92
Words from St. Isaac of Syria86
Holy Intercession Church in Glen Cove, NY, Celebrates its 70th Anniversary82
Since the Start of the Pandemic Moscow Priests Have Made Over 4,000 Visits to Patients with COVID-1965
Archbishop Peter of Chicago and Mid-America in an interview to Poltava Diocese’s press service reveals interesting moments in the life of St John (Maximovich)52
Using Our Time Wisely to Cultivate the Seeds of Faith2
“Do Not Weep”1
Most popular authors
Pravmir.com team291
Archpriest Michael Gillis248
Archpriest Lawrence Farley149
Aurelian Iftimiu105
Archpriest Stephen Freeman87
Priest Luke A. Veronis2
Archpriest Peter Olsen1