Source: Orthodox Christian Network
It seems to me that very young children are not, therefore, in a position to decide whether or not they will become Christians. Rather, this decision still remains with the parents who raise them. The parents decide that their five-year-old will be brought with them to church just as they decide that the child will go to school, and the little one at that age has nothing to say about it.
Archpriest Lawrence Farley | 09 July 2014 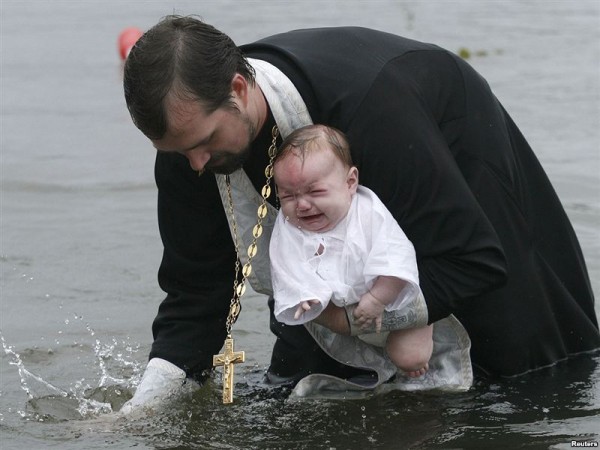 A number have people have viewed a video on Youtube lately showing the last minute or so of a family drama in church. It concerned an Orthodox family gathered with their young three-year-old daughter for her baptism in a Greek Orthodox Church in Munich. Sadly, I am unilingual, and so unable to understand the exchange in Greek between the priest and the little girl. One imagines that he asked her if she wanted to be baptized and she answered negatively. Whatever the exact nature of the exchange, he decided in the moment to discontinue the baptism, removing his priestly stole, and bringing the family rite to a crashing halt.

Since the 96-second drama was put on Youtube, it has ignited something of a controversy, centering on the question of whether or not the priest did the right thing. You have to feel for the clergyman and for the family, who have had a private and painful moment splashed all over the internet. Not being privy to either the exact exchange or any other of the relevant background details, I of course cannot offer a worthwhile opinion regarding whether or not he did the right thing, though I would urge compassion for the priest who was trying to do the right thing and had to make a snap decision on the spur of the moment. At the very least one should acknowledge his integrity and his concern to maintain certain minimal requirements for the performance of a sacramental rite. And I did wonder a bit about the motivation for putting a record of the moment on Youtube. Was it meant to be a public shaming of the priest? Such things, presented to the public without any context or further explanation of circumstances, rarely bear spiritual fruit. Rather than weigh into the debate, I would like to reflect for a moment on the baptism of young children, some of whom show a distinct lack of enthusiasm at the prospect of being soaked by a stranger in church. 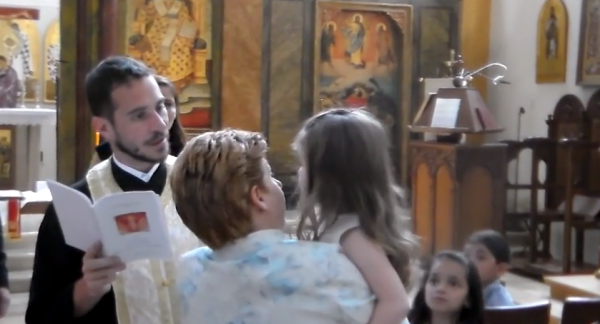 I remember a similar baptism at our own St. Herman’s Church in Langley, B.C. The mother was a convert who was being baptized, along with her little son. The boy was not old enough to make a responsible decision about faith and church-going (he was about four or five), but he was old enough to know that he did not want to be placed in the font in which his mother had just been immersed (we use a large horse trough for immersing adults), and to be forced under the water three times by Fr. Lawrence. His objection was not theological; he just did not want to get wet. His mother had prepared us for this eventuality, and so we had a bucket at the ready. We lifted the little boy into the font, whereupon, as expected, he began to protest loudly (I mean, loudly) and attempted to climb out. We were all ready. I held the small candidate in place with one hand and with the other poured a bucketful of water over his head three times, saying the prescribed words. He then climbed out and the service continued. All is now well; he shows every sign of having forgiven me.

This raises the question of just what is required of candidates for baptism. Obviously the requirements are clear for adults: they must repent of their sins (making the necessary amendment of life) and accept the Orthodox Faith, intending to live henceforth like an Orthodox Christian and attend Liturgy every Sunday. But what about babies?

Some Baptist traditions assert that the conditions for adult baptism are incumbent upon all, and so since babies cannot repent and give intellectual assent to the Faith, babies should not be baptized. Orthodoxy disagrees, and has always baptized babies, on the condition that their parents are devout and will raise the children in a life of repentance and faithful discipleship to Christ. The infant catechumens may squawk at the time of their baptism, but there is little they can do to prevent it. Most people have no objection to the squawking and even think it is rather cute.

The difficulty comes with young children, who are old enough to object but not old enough to responsibly make major life decisions. No one would suggest that a three- or four-year-child is able to decide wisely whether or not he should go to school, or to decide which career he will choose as an adult, nor which marriage partner to pick, nor whether or not to embrace a life of monasticism. For this reason we do not countenance child marriage, and monasteries, though they may take in children, will not tonsure them as full monks until they are much older.

It seems to me that very young children are not, therefore, in a position to decide whether or not they will become Christians. Rather, this decision still remains with the parents who raise them. The parents decide that their five-year-old will be brought with them to church just as they decide that the child will go to school, and the little one at that age has nothing to say about it.

God gives to parents the weighty responsibility of raising children. They fulfill this responsibility by teaching their children to pray and attend church, to go to school, and to be honest in all their dealings. The children may of course repudiate the faith and the baptism they once received and become apostate, just as they may repudiate the parental counsel to deal honestly and become thieves. Everyone has free will, including children, and not everyone uses it wisely. But the parental responsibility to teach children the right thing to do remains nonetheless. Sometimes this involves making decisions and taking actions which generate no enthusiasm in the child. Children do not always know what is best for them. That is why God gives ultimate power and responsibility to the parents.

If the experience of the priest and the family in Munich teaches us anything, it teaches us the wisdom of preparing both child and priest for all the eventualities that may occur during the baptism. From the very brief glimpse of the debacle we were allowed to see on Youtube, it looks as if all involved were winging it. Given the possibility of having unenthusiastic young baptismal candidates, such courageous spontaneity should be studiously avoided.