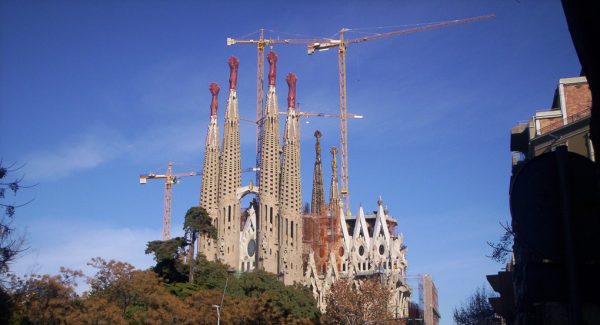 The distinctive modernist structure was designed by the acclaimed Spanish architect Antoni Gaudí.

Work began in 1882, with Guadí taking over the following year and spending the remainder of his life on the project.

However, only a fraction of the building was complete when he died in 1926, and work has continued in the century since then.

Even in its incomplete form it has become one of Barcelona’s most popular tourist attractions, with an estimated 20 million visitors every year.

Yesterday, the Barcelona City Council approved the construction licence that will allow the Junta Constructora de la Sagrada Família to carry on with Antoni Gaudí’s project, reports the official website of the church.

The normalisation of the construction licence was made possible through a collaboration between the Barcelona City Council and the Sagrada Família, which have worked closely for the past two years. Last October, the two institutions signed an agreement to normalise the construction licence and contribute financially to urbanisation, mobility and maintenance of its surroundings.

As a preliminary step, in February the Special Plan and Modification of the General Metropolitan Plan were approved.

And now, the process is finished: after 137 years, the Sagrada Família finally has a proper construction licence.

Most viewed articles
The Truth About Riches180
The Muskox Response To COVID-19141
Metropolitan Onuphry Speaks on How to Protect One’s Soul From Sin104
Patriarch Porfirije Thanks the Russian Church for Participation in Restoring Serbian Churches97
Do We Act Differently Than Others?74
Strong Orthodox Presence at the 2022 March for Life60
March for Life participants optimistic for a post-Roe America: ‘This is just the beginning’56
Most millennials, Gen Z adults support bans on abortions when baby’s heartbeat is detected: poll51
Sunday of the Samaritan Woman2
How We Worship: the Struggle of the American Experience1
Most popular authors
Pravmir.com team312
Fr. Gabriel Bilas180
Archpriest Michael Gillis141
Priest Luke A. Veronis73
Ryan Foley56
Maria Trushanina1