Source: No Other Foundation
The combat and warfare of which St. Paul speaks is a spiritual combat, and our enemies are not flesh and blood people, but the spiritual armies of darkness in the heavenlies, those that inspire rebellion against God and which seek to work in our own hearts as well.
Archpriest Lawrence Farley | 15 June 2021 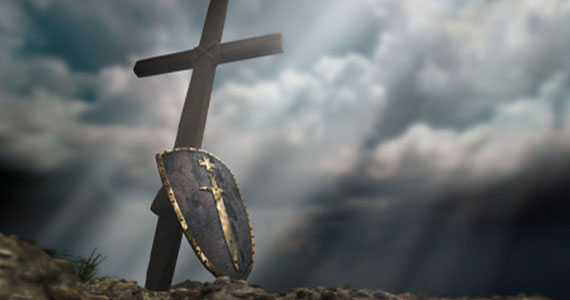 One of my favourite hymns from my old Anglican days is Be Thou My Vision.  Based on a sixth century Irish poem attributed to St. Dallan Forgaill, it was translated by Mary Byrne in 1905, and versified by Eleanor Hull in 1912. I was trying to find a version of the hymn to download, but had trouble finding the entire version which I used to sing from the Anglican Hymnal. There were a number of versions covering the hymn, including a lovely one by Audrey Assad, but all of them seemed to be incomplete, and the missing verse was always the same one. It seemed as if everyone loved the hymn, but thought this particular verse could well be omitted. The seemingly offending verse ran: “Be Thou my battle shield, sword for the fight. Be Thou my dignity, Thou my delight. Thou my soul’s shelter, Thou my high tower. Raise Thou me heavenward, O power of my power.”

One imagines that it was omitted because it seemed too warlike, with all its talk of swords and shields, fighting, and high towers. And calling God “power of my power” seemed a bit too pugnacious to be genuinely devotional. “Power of my power”? Who talks like that except someone obviously spoiling for a fight? Much better to give it a miss.

One can see their point, especially in our day when we have had more than enough of the horror of war. The reality of modern warfare with all its brutality has definitely taken the shine off any talk of the glories of war that might have inspired our ancestors. And Christians, though not committed to strict pacifism by our faith, are at least committed to lives of peace and forgiveness. St. Paul says that the Lord’s servants must not be quarrelsome (2 Timothy 2:24), and St. James tells us that the wisdom which is from above and which must inspire us is pure and peaceable, gentle, open to reason, and full of mercy. It is sown in peace by those who make peace (James 3:17-18). A warlike Christian is almost a contradiction in terms.

Granted all this—but what, we may still ask, about all that martial imagery in the same St. Paul? He speaks of our warfare, waged with spiritual weapons, in which we destroy strongholds and take captives (2 Corinthians 10:3-5), and he speaks repeatedly of the armour and weapons we must strap on for our combat (Ephesians 6:11f, 1 Thessalonians 5:8). He also speaks of our battle shield and our sword. What does all this mean?

The combat and warfare of which St. Paul speaks is a spiritual combat, and our enemies are not flesh and blood people, but the spiritual armies of darkness in the heavenlies, those that inspire rebellion against God and His Christ and which seek to work in our own hearts as well. The shield on our arm is not made of wood and metal, but is the shield of faith; the sword in our hand is not a blade sharpened to shed blood, but the sword of the Spirit, which is the proclamation of the Gospel.

There is a time to use these weapons to speak the truth. This does not mean, let us hasten to add, that we must leap up on every possible occasion to assert our views. As Scripture reminds us, there is a time to keep silence and a time to speak (Ecclesiastes 3:7), and sometimes an eloquent silence can speak more loudly than many words. If we develop a reputation for annoying people by always arguing about the Christian faith, it is possible that we should return to that Scriptural counsel and consider keeping silence more often. No matter when or how often we speak, we must remember the Apostle’s counsel, “The Lord’s servant must not be quarrelsome”.

But sometimes it is not a matter of quarrelling but of defending truth when truth is challenged or under attack. One thinks of the words of that modern theologian Doug Bennett (founder of “Doug and the Slugs”) who sang, “I speak up when I feel it’s right; I jump up when I know that I got to fight. Until then I just take it day by day by day”.

It is a matter of discernment in the moment: is now the time to speak up? Would my silence in this moment be a guilty silence, born of selfish concern for my popularity? And if one decides that it is the time to jump up and fight, wielding the sword of the Spirit, one must still take care not to quarrel; one must remember that one’s aim is to win over the opponent, not to win the argument. In fact, better to lose the argument if by doing so one may win the heart of the person. St. Peter gives specific instructions to us about how to speak at that time: when we make our defense and give an account for the hope that is within us, we must do it with gentleness and reverence, keeping our conscience clear (1 Peter 3:15-16). If we feel ourselves becoming agitated or angry, if we keep interrupting our opponent, if we lose our internal peace, then we are doing it all wrong. Sometimes we must speak up, but at all times we must be polite and calm. Here is a handy rule—if we feel ourselves losing our inner peace or becoming angry, it is time to shut up and keep silence.

The Church needs those who will defend its faith when it is under attack. Everyone may be sometimes called upon to give an account for the hope that is within them, but not everyone is called upon for this specialized ministry of defense. Those that were called to this ministry in the past were given the name “the Apologists” (from the Greek apologia, meaning “defense”). Those fulfilling this task expose themselves to certain dangers. They may be subject to name-calling, misunderstanding, or in extreme cases, persecution—just ask St. Justin, one of the Church’s earliest Apologists (also called “Justin Martyr”). But the task must be undertaken today nonetheless, often by the clergy, part of whose job it is to defend the flock from wolves. That is why a battle shield and a sword are necessary, and why one looks for a soul’s shelter and a high tower. The forces that would drag one down are many, ferocious, and unrelenting. An evangelical apologist will ask the divine Power of his power to raise him heavenward and defend him. When we ask the Ruler of all and Lord of our hearts to be our vision, we need all the gifts available to us.