Bearing the Cross – What Does This Mean? 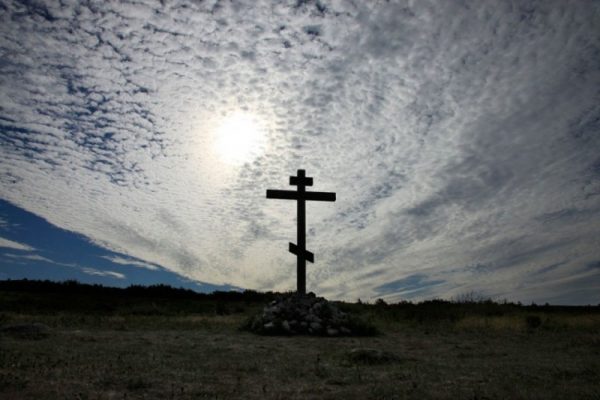 Jesus told his disciples, “Whoever wants to be my disciple must deny themselves and take up their cross daily and follow me.” (Luke 9:23) What does it mean to take up our cross daily? This is a question that St. Theophan the Recluse addressed in a series of homilies in 1885.

First, let’s examine what is meant by the Cross. St. Theophan says the following:

The Lord accomplished our salvation by His death on the Cross; on the Cross He tore up the handwriting of our sins; through the Cross He brought upon us grace-filled gifts and all heavenly blessings.”

But there is more, as the above is Christ’s Cross, and we must take up our personal cross. St. Theophan says:

When the personal cross of each of us is united with Christ’s Cross, the power and effect of the latter is transferred to us and becomes, as it were, a conduit through which “every good gift and every perfect gift” (James 1:17)  is poured forth upon us from the Cross of Christ.

The message is clear that there is more to our salvation than just believing in Christ, His Incarnation, His Crucifixion and Resurrection. In addition to His Cross, our personal cross is equally essential for our salvation.

But, what is our personal cross? Saint Theophan outlines three kinds.  One is outward, another is inward and a third is spiritual.

1.The outward cross involves the trials and tribulations of our life. St. Theophan describes them as follows:

These are sorrows, misfortunes, the loss of loved ones, failures at work, every sort of deprivation and loss, family troubles, adversities related to outward circumstances, insults, offenses, wrongful accusations, and, in general, our earthly lot… Neither eminence, nor riches, nor glory, not any kind of earthly greatness will deliver one from them.

He makes the important point that we must make use of these difficulties in life in accordance with God’s intention for our salvation. So, why does God allow us these difficulties in life? Saint Theophan says he gave them to us “so that we would live on earth, not as someone in his own land, but as a stranger and a foreigner in a foreign land.” As foreigners, we are to seek our return to His kingdom. To understand this we must refresh our understanding of the story of Adam and Eve told in Genesis, and how they were originally living in Paradise in union with God. But they disobeyed Him and suffered the consequences of death and sorrow and sickness, and were ousted and banned from Paradise. This is our outward cross to bear, the difficulties of a mortal life outside of Paradise. And how are we to bear them?  St. Theophan tells us to “endure them and don’t be annoyed…bear your lot with equanimity.”

Remember, these difficulties encountered in life are similar for all of us. We are all subject to misfortune and sorrow. God allows them for our benefit.  St. Theophan tells us,

The Lord wants to wash away some sin, or to lead us away from a sinful deed, or to cover up a greater sorrow with a smaller one, or to give us an occasion for patience and for demonstrating faithfulness to the Lord, so as to show forth the glory of His mercy on us later… If you don’t clearly see precisely what God wanted to give you through sorrow that has overwhelmed you, raise up in your heart  the general, non-speculative belief that everything that comes from the Lord is for our good, and give a shove to your disturbed soul: this is what is pleasing to God. Endure! He whom punishes is like a son to Him!

Enduring your sorrows with faith are what it means to bear your personal cross. Enduring with the love of God, giving thanks for all He gives us, you are bearing your cross in a way that will bring salvation.  Saint Theophan says,

“Arouse gratitude within yourself, humble yourself under the mighty hand of God, repent, and correct your life.”

2.The second kind of cross is inward. This is the struggle against the passions. Saint Paul says, “They that are Christ’s have crucified the flesh with the affections and lusts”(Gal 5:14). Saint Theophan says,

There is a cross upon which these passions and lusts are crucified. To crucify the passions means to weaken them, suppress them, and uproot them… When someone is fighting against the passions, sometimes it seems as if his hands were nailed, as if he is wearing a crown of thorns on his head, as if his living heart is pierced.

The culprit is self love, advises Saint Theophan. He writes,

Anger burns, envy dries one up, lust enfeebles one, miserliness does not let one eat or sleep, and offended pride murderously eats away at one’s heart… Everyone has them. As soon as there is self love, there are all the passions, for this is the mother of the passions…

So what is one to do?  Saint Theophan says,

One has only to turn the knife around and, instead of satisfying the passions, to strike oneself with it, to strike the passions with it, beginning the fight against them and contradicting them in everything… One must say to every passionate person: “You’re perishing on the cross of passions. Destroy that cross and set up another: the cross of the fight against it. And you’ll be crucified on it unto salvation!”…. go courageously to the cross of self-crucifixion, through the crucifixion and uprooting of the passions and lusts. Let us turn away from self-pity and become inflamed with zeal for self-accusation… the Cross is the tree of life.

3.The third cross is the devotion to the will of God.It is not enough to crucify the passions. This is only preparatory for this step which involves our obedience to God’s will. We are now ready to offer ourselves up as a sacrifice to God. We follow Christ’s example in the Garden of Gethsemane before His Crucifixion. Christ prayed that He be spared, but was resolute in saying, “Nonetheless not as I will, but as Thou will”(Mark 26:39). CHrist as fully man bound his will with that of God. It is as Paul says, “I am crucified with Christ: nevertheless I live; yet not I, but Christ lies in me” (Gal 2:20). Saint Theophan says this is the “height of Christian perfection… It is the beginning of the future state after the resurrection, when God will be “all in all” (1 Cor 15:28). Those who are perfect live and act through God alone.”

Many have the idea that Christianity is the same as other kinds of life, but this is not so. It begins with repentance, ripens through the fight against passions, and is perfected when  the pure, inner man, immersed in God, is crucified with Christ… If Christians do have pleasures they are purely incidental. The most distinguishing characteristics of their existence are sufferings and sickness––inward and outward, voluntary and involuntary. We must through much tribulation enter into the kingdom, and into that which is within it.….If you want good for yourself, get rid of pleasures and enter on the path of the cross of repentance, burn up in the fire of self-crucifixion, be tempered in tears of heartfelt contrition––and you’ll become gold, or sliver, or a precious stone, and in due time you’ll be taken by the Heavenly Householder as an adornment for His most bright and most peaceful mansions.