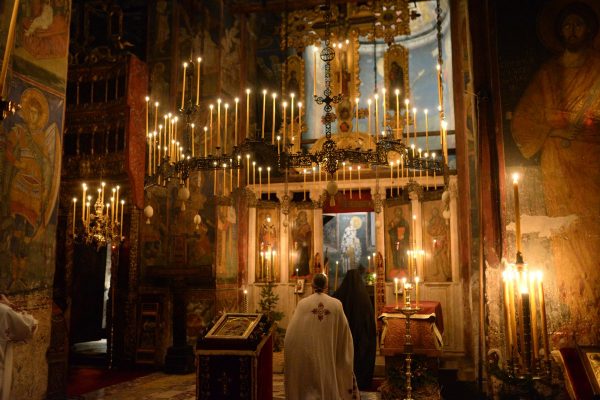 Every human being is an icon of God…so iconoclasm is a much larger matter than smashing statues and such. It also includes the hatred of others and the injustice that grinds them into the dust. The quiet iconoclasm of poverty and the like are insidious in that they’re so quiet they look like an act of nature. Iconoclasm can only be overcome through love, the love of the beauty of the image of God wherever it is found.

Scenes of statues toppling and pictures of defaced public spaces can be disturbing. Sometimes, they can be exhilarating. I recall watching statues of Lenin and Stalin fall during the collapse of the various Communist states. It felt like freedom. I also recall my dismay during my first trip to Greece where nearly every public wall and monument (Church and otherwise) is covered in graffiti. There is an instinct at work surrounding images (both their making and their destruction) – one that is profoundly religious in nature. As such, it has the capacity to save us or to destroy us. But make no mistake – it is filled with power.

Not all Christians care for icons. Some positively despise them. But none of them can deny the power of the image (icon) itself. “Image” is the word used to describe the very act of human creation. We are created according to the “image and likeness” of God. No other statement enshrines the dignity and true worth of human beings in such an inarguable manner. It puts a stamp of ultimacy on our very existence. Not only are we described as having been created in the image of God, but our salvation itself is portrayed as a return to the fullness of that image as we behold the face of Christ.

But we are also “smashers” (iconoclasts). When Rome defeated Carthage in 146 BC, it leveled the city. Some say that they even plowed the ground and sowed it with salt, consigning the space to oblivion. In 70 A.D. Rome destroyed Jerusalem, along with its temple. Today, in order to reach the streets of Jerusalem upon which Jesus walked, you have to dig deep underground – what stands on top represents much later construction. Such actions seem to have a role of “catharsis” or “cleansing,” in which an enemy is not only defeated but erased. Who hasn’t wanted to do such a thing to the memory of a hurt that haunts? We hear it echoed in St. Paul’s prayer that “God will speedily crush down Satan under your feet” (Romans 16:20). We not only want Satan to be defeated – we want him erased.

We have to recognize both impulses within us (the love of icons and their smashing) to come to grips with the whole of who we are meant to be. At its deepest level, we do not understand icons until we understand beauty and its crucial role in our existence. The love of beauty and our desire for it are the most fundamental parts of our being. This is particularly true if we use the word “beauty” in the fullest sense of its meaning. Beauty encompasses being and truth as well. It is God’s word for His creation (usually translated as “good,” the word in Scriptures also means “beautiful”). That which is beautiful and good is reflective (iconic) of the God who created it. All of creation longs for union with this Beauty and groans for it to be made manifest.

In the life of the Church, the making of icons begins early, possibly in its very beginning. Israel already made a careful use of images (some are prescribed for use in the Temple itself). St. Paul, and others following him, elevated a “theology of the image” into a central place in Christology and the doctrine of salvation. There were already hints of this theology in some of the writings of the Second Temple period. The fulfillment of the image of God in Christ allowed the veil to be torn away from that mystery and its clear form to be discerned.

Nevertheless, the drive towards iconoclasm has remained rooted in our hearts. Every sin against another human being is a form of iconoclasm. Violence is probably its most dangerous form, although every sin against another carries an element of violence within it (Matt. 5:21-22). We are experiencing an unprecedented display of public anger and iconoclasm in our cities and news cycles. Of course, the quiet iconoclasm of injustice has far deeper and long-lasting effects. The one does not justify the other. Injustice added to injustice only adds up to injustice. That we might understand it does not change its nature.

The Church’s witness to icons and their veneration is, ultimately, a witness to beauty. It is also a witness to the only path of salvation, both for individuals and the world as a whole. St. Augustine described the work of salvation as the “City of God.” And though we idealize the natural setting of a home in the wilderness, it is the image of a city that the Scriptures use to describe salvation. St. Paul writes:

“But our citizenship [“politeuma” πολίτευμα] is in heaven, and from it we await a Savior, the Lord Jesus Christ, who will transform our lowly body to be like his glorious body, by the power that enables him even to subject all things to himself.”(Philippians 3:20–21)

The word “politeuma,” translated as “citizenship,” is formed from the word, “polis,” or “city.” Citizenship is the “place where we have our “city-ness”).

It is the New Jerusalem that we await (Rev. 22:2), a “city whose builder and maker is God” (Heb. 11:10). Cities require human relationships and exist well when the beauty and health of those relationships is foremost in its planning and execution. Cities whose inner being exists only for economic profit serve as images of a god, Mammon, and its people begin to resemble slaves.

The building of cities, in this highest sense of the word, is a construction of “city-ness,” an icon of the city that is to come. This is not a call for utopianism, but a recognition that there are holy patterns given to us that make for a greater wholeness in our lives. This is hard work. Iconoclasm and destruction are the work of a moment, driven by passion and the darkest places in our hearts. Anybody can smash. To make something beautiful takes care, love, and attention to detail. It is a work of holy living.

In the great wash of news stories of the past weeks, an image of beauty came across my desk that was encouraging. In Atlanta, scene of many racial tensions through the years, also the site of an egregious racial killing in recent days, there was a march on Juneteenth (a date marking the end of slavery). It was sponsored by One Race, an organization founded by black and white pastors in the Atlanta area back in 2017. They have been doing a slow work of common prayer, common discussions, and common understanding towards the healing of racial sins and the union of the faithful. They profess that only in Christ can such sins be overcome. On that day, some 15,000 faithful gathered for a peaceful march to lift up Christ and to profess their common faith and love for one another. It was encouraging because it was not simply a passion of the moment, but the fruit of three years of patient work, something that will likely continue for some time to come. When the news cycle easily leads toward despair, it is good to see so many knees that bow to Christ walking together and professing faith in the city whose builder and maker is God.

The opposite of iconoclasm is “iconodulia” (the honoring of icons). At its heart, iconodulia is the love of true beauty. This love is quite the opposite of the drive towards iconoclasm. Iconoclasm needs love nothing: the will to destruction is entirely sufficient to provide motivation and energy. In the end, it might yield nothing more than nothing-at-all, an emptiness of fruitless effort that collapses back on itself. It is not life-giving. Iconodulia requires inward attention as well as outward responsibility. It is slow and requires patience. Some efforts of beauty can be so great that they survive for millennia and more. The beauty of Hagia Sophia (for example) continues not only in that single, striking building, but in the thousands of echoes that have shaped so many Orthodox temples since. Its power lies in the fact that its beauty reaches beyond itself towards a greater Beauty that only God can build. As such, it is echoed in every element of beauty that we find in nature as well.

Such beauty requires people who live beautiful lives. They need neither wealth nor power, only the living icon of the Logos to be manifest in their being. It is the secret to Christian “civilization” – not an empire maintained by force of arms or economic power. Rather Christian civilization is the politeuma of the heavenly city that is continually reborn in the heart of every Baptism. That city is built in the heart. It is there that we repent and there that we forgive. It is there that we find within us the image of the city that God has already prepared for us.