Being Inspired by St Sophia and Her Children Faith, Hope, and Love 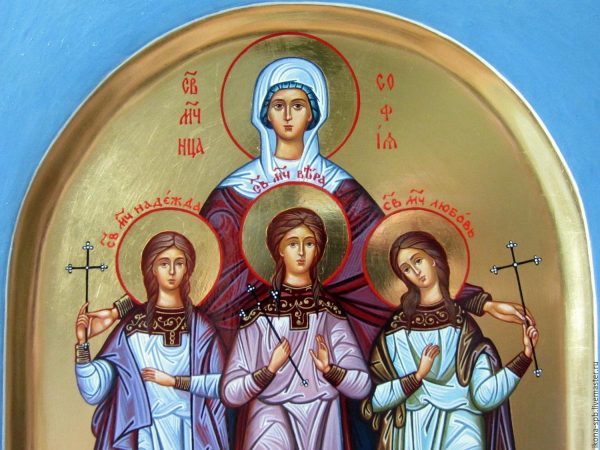 Icon of St Sophia and her children Faith, Hope, and Love

In the reign of the Roman Emperor Hadrian (117-138) there lived a widow called Sophia, which in Greek means “wisdom”. She was a Christian, and in accordance with her name, she lived her life wisely.  She had three beautiful daughters whom she called by the names of the three Christian virtues: the first was called Faith, the second Hope, and the youngest Love. She taught her daughters to live in a way pleasing to God by prayer, fasting and helping the poor. As the children grew in age, so also they grew in virtue, being obedient to their mother,  they read diligently and knew well the books of the Prophets and Apostles; they were fervent in prayer and housework. Their beauty combined with their virtuous lives attracted the attention of many.

When the fame of their lives reached the pagan Emperor Hadrian, he sent for them to come to him.  The wise mother warned her daughters that the Emperor persecuted Christians and would tempt them to worship the pagan idols by promising them great gifts, riches and honor and all the things of beauty and pleasure in this vain world.  She begged them to choose rather their beloved Lord Jesus Christ and the heavenly beauty such as human eyes have never seen and which God has promised to those who love Him.

“O my dear daughters,” she said, “remember my words with which I taught you the fear of God and comfort your mother in her old age by your good and courageous confession of faith in Christ.” Encouraging and supporting one another, they promised their mother that with Christ’s help they would put into practice all her valuable advice.

When the Emperor’s servants came for them, all four, mother and daughters, protected themselves with the sign of the Cross saying: “Help us, O God, our Savior, for the glory of Your holy Name.”

On reaching the palace, they were presented to the Emperor. Seeing their beauty and their bright and fearless faces, the Emperor began to ask them their names, they answered that they were all Christians and wished to live for Christ alone Who is to be worshipped by all generations.

Hearing this, the Emperor grew angry. Just as the mother had warned. He asked the girls to become as his children and worship his gods, promising them glory and honor; but if they would not obey he threatened to torture and kill them.

The holy virgins answered him with one voice: “Our Father is God Who lives in heaven. He takes care of us and our lives. We want to be loved by Him and we wish to be called His true children. Worshipping Him and keeping His laws and commandments, we reject your gods, and we are not afraid of your threats.”

The Emperor was very surprised at the courage of these young girls.  At this time Faith was only 12 years old, Hope was 10, and Love was just 9.

The Emperor again tried to force them to worship his false gods. He commanded Faith to offer sacrifice to the goddess Artemis. When she refused she was beaten and tortured. Faith endured all of this evil bravely by calling upon her Lord, and when she was put in a cauldron of boiling tar and oil she remained unharmed. She sat in it as if it were cool water and sang praises to God. Seeing that no amount of torture could force the girl to give up her faith in Christ, the cruel Emperor ordered her to be beheaded before the very eyes of her mother and younger sisters.

When the second sister Hope also refused to worship the false gods, she was thrown into a fire, but she too remained unharmed and glorified the true God. The torturer was furious that he could not hurt her and ordered her to be thrown into the boiling cauldron, but it at once melted like wax, and the tar and oil poured out and burnt the bystanders. Ashamed that he was unable to shake the faith of such a young girl, the torturer ordered Hope to be beheaded. Knowing that the same cruel torture awaited her younger sister, Hope encouraged her and said, “Do not be left here, sister. Let us stand together before the Holy Trinity.” Then she bent her head and was beheaded with a sword.

When the torturer called the youngest sister, Love, to worship the false gods, she also, even after seeing her sisters’ tortures, did not hesitate to confess her faith in Jesus Christ.  She was ordered to be thrown into a stove, but just like the three youths in the Old Testament, Love remained in the stove unharmed; walking about as if in a cool place, singing and praising God.

The Emperor ordered still more cruel tortures, but the young girl proved true to her name for love “endured all things” (I Cor 13:7).  Finally, she too was beheaded and went to join her sisters who stood before the throne of their beloved Lord Jesus Christ.

Their mother rejoiced, knowing that each of her daughters had received a heavenly crown.  Soon she too passed on to the Lord and shared with her daughters in the heavenly kingdom after she received a martyr’s crown.