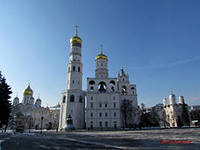 Bell-ringers of the Moscow Kremlin will give an unprecedented bell music concert on the day marking the 400th anniversary of the House of Romanov.

“After a solemn patriarchal service on March 6 the “Tsar Toll” will be rung to celebrate the end of “chaos” 400 years ago and the enthronement of the new governing dynasty,” Igor Konovalov, artistic director of bell music performances at the Moscow Kremlin and Christ the Savior Cathedral, told Interfax-Religion.

“The Reut ringing was heard by all of the Romanov tsars, from Mikhail Fyodorovich to Nicholas II,” he said.

The Reut is the main ringing monument of the Romanov family, Konovalov said. “It was cast on order from the young tsar Mikhail Fyodorovich and his father Patriarch Filaret, to mark success in overcoming the chaos. The bell was made by the legendary Russian caster Andrey Chokhov, who had also made bells and cannons for Ivan the Terrible, and tsars Fyodorov Ioanovich and Boris Godunov, and who immortalized the art of casting by making his Tsar Cannon.

Bell Reut survived the 1812 Patriotic War when the belfry of the Assumption belfry was blown up. The bell fell for a second time during the coronation of Alexander II.