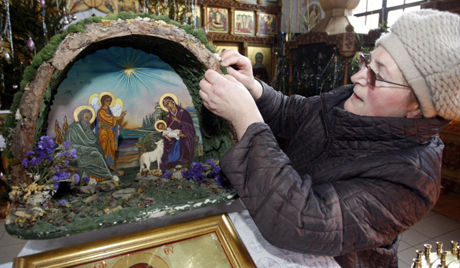 On the eve of Christmas, which most Orthodox Churches celebrate on January 7, the Russian Orthodox University in Moscow presents the Nativity Scene art-project. The project provides an opportunity to imagine Bethlehem of the time when Jesus Christ was born, to feel the atmosphere of the great holiday and to pay homage to the great Christian relics not only on the Holy land but also in the Russian capital.

These days a tiny yard of the Church of St. John the Evangelist Under the Elm, a family chapel of the Russian Orthodox University in the very center of Moscow, looks like a cave in which according to the legend Jesus Christ was born. There are figures of curious sheep and goats, hay all over the place and naturally the cradle with the newborn.

The Nativity Scene art project also includes puppet shows for children and grown-ups telling the story of the nativity, performances based on historical plots and folk music concerts. These days the place receives many pilgrims. Many parents and children come to this place. Little children are so impressed by the performances that they don’t want to go home. Igor, who is 6 years old, said he had already celebrated Christmas with his parents before but he had seen a puppet show for the first time.

“Christmas is a cheerful holiday because God was born. We decorate a Christmas tree and we take our gifts from under the Christmas tree, light candles and shoot off fireworks.”

However it is possible to share the history of Christmas not only though the Nativity Scene and puppet shows. These days the church’s altarpiece houses a shrine with parts of the protecting veil of the Holy Mother and scarf of the Blessed Virgin. This is very symbolical that our cathedral has received these two relics which are constantly kept in France and Italy, Father Pyotr Yeremeyev, chancellor of the Russian Orthodox University, says.

“The old legend has it that the Holy Mother wrapped her child in this very protecting veil. Nowadays many parents keep at home labels with the name of the maternity clinic, weight and height of their children. I think in this respect modern and ancient times don’t differ much. Any mother and father tend to keep the evidence about the birth of their children. I think that Holy Mother could also keep the clothes she wore when her child was born.”

The protecting veil of the Holy Mother is regarded as a miracle working relic. In 911, it played a liberation role in the history of the French city of Chartres. Then the city survived a devastating inroad of Vikings. Since then the relic has been kept in the city’s main cathedral and even survived a huge fire.

In its present state the protecting veil of the Holy Mother is only a fragment of the silk beige cloth, which is about 2 meters long and 50 centimeters wide. Initially it was almost 5.5 meters long but during the French revolution in order to save the sacred item the clergy of the Chartres cathedral cut it into many pieces. They all were given to the people who remained faithful to Christ in difficult time of “freedom, equality and brotherhood”. In 1819, the cathedral received back only one piece of the veil but the biggest one.