Bishop Benedict of Bistrița in Relation to Young People: I Want to Be One of Them 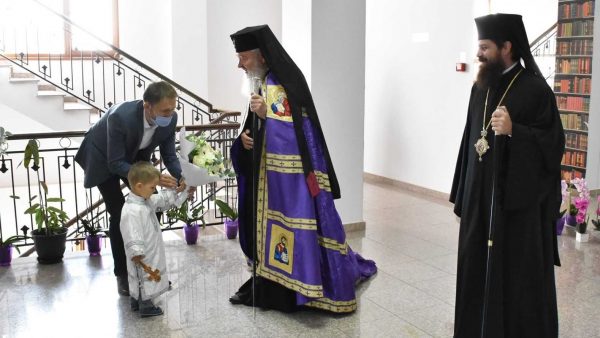 A professor of Orthodox Spirituality at the Faculty of Theology in Cluj and the youngest Romanian hierarch, Bishop Benedict of Bistrița talked about his relationship with young people after a year in office.

His Grace said that the year that passed since his ordination on February 23, 2020, was a time of his definition as a hierarch.

“My self-definition was also based on them, or very much depending on the relationship I had with young people, either from the Faculty of Theology or from outside,” the assistant bishop of Cluj Archdiocese said in an interview for Radio Renașterea.

“They were also surprised at one point by my rather relaxed behaviour towards them because, in their minds, maybe, it seemed to them that my ministry would involve sobriety, and that’s about it. And I said: yes, of course, it presupposes sobriety, but sobriety that manifests itself, however, in a kind of freedom, which I am not afraid of and which I assume quite easily.”

“I want to be one of them because my age still benefits me towards this,” confessed the Assistant Bishop of the Archdiocese of Vad, Feleac and Cluj. “And I tried, during this period, beyond the obstacles I had, because of the special times, to be in their midst and to be, in a way, one of them.”

“Young people are an area of utmost importance for me, for my pastoral ministry,” Bishop Benedict said, reiterating what he said a year ago at his ordination to the episcopate. “I feel that they have a deposit of enthusiasm, a deposit of ideas, visions, perspectives, which must be encouraged.”

“And I said that this self-definition of mine was much conditioned by them, in the sense that I challenged them, in several situations, to tell me how they would see the service of a bishop and, especially, given my age. And I was pleasantly surprised to receive concrete, courageous, beautiful and useful answers because it is essential to see how this service is seen from the outside as well.”

His Grace said that young people were “of maximum profit” to him as “resources of courage and good boldness.”

“I hope that I was in this sense, because feeling close to them they were also able, daring to ask me many things that, maybe, in other contexts would not have asked, but in this relaxed atmosphere and slightly friendly, they felt free to do so.”

“In this way, the relationship, from both sides, also helps to better understand the problems that young people have, on my part, but also to a much more natural and correct positioning of young people towards what a servant of the Church means and in this way, I also refer to a servant in this dignity of a bishop.”

In the interview, the assistant bishop described the collaboration he has with Metropolitan Andrei. He also referred to how he went through the year of the pandemic and what his future goals are.

Photography courtesy of the Metropolis of Cluj, Maramureș and Sătmar