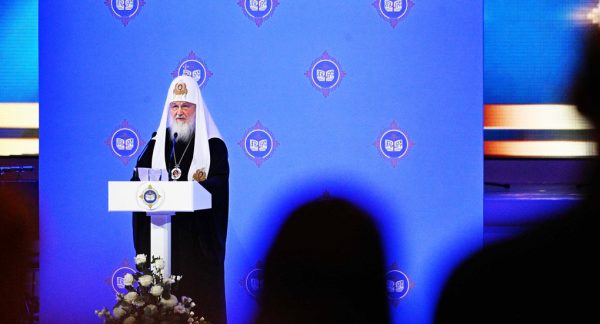 His Holiness Kirill, Patriarch of Moscow and All Russia, presided over an opening ceremony of the plenary session of the XXVIII International Christmas Educational Readings on Monday. This year the readings are dedicated to the 75th anniversary of the Victory in Great Patriotic War. In his speech, he encouraged those present to pay special attention to spiritual, moral and patriotic upbringing of young people, noting that the well-being and prosperity of Russia largely depends on how the youth will be brought up today.

“Sharing the heritage of the Great Victory is impossible without unanimity and consolidated efforts for spiritual, moral and patriotic education of the younger generation,” said His Holiness Patriarch Kirill according to the press service of the Synodal Department for Relations of the Church with Society and Mass Media.

The Primate of the Russian Orthodox Church emphasized that “effective means of patriotic education such as volunteer movement, the organization of patriotic teenage and youth camps, educational trips to places of military glory, museums, and so on” should be encouraged in every way.

“The well-being and prosperity of Russia today largely depends on what the result of the upbringing of young people will be,” concluded the Patriarch.