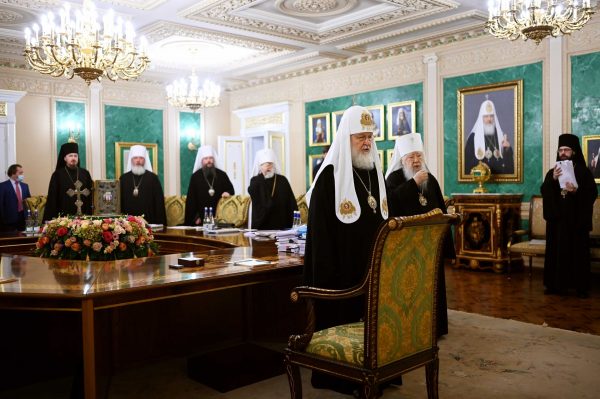 – The Synod is concerned about the social conflict in the Republic of Belarus. The Synod considers it important that the authorities thoroughly investigate all cases of violence against both citizens and law enforcement officers and punish those responsible for violating the law.

– The Synod sees the concern of people with “the possibility of further application of the methods that were used during the pandemic to ensure the necessary reduction of personal contacts between people” to be justified. The use of these technologies requires control by society and the Church.

– Bishop Veniamin (Tupeko) of Borisov and Maryina Gorka has been appointed the patriarch’s exarch of all Belarus. His predecessor, Metropolitan Pavel, was appointed head of the Kuban Metropolitanate.

– Archpriest Maxim Kozlov, Chairman of the Educational Committee of the Russian Orthodox Church, was appointed Acting Rector of the Sretensky Theological Seminary.

– His Grace Bishop Thomas of Bronnitsk was appointed Abbot of the Holy Trinity Lavra of St. Sergius with the title “of Sergiev Posad”.

– His Grace Bishop Theodorite of Skopinsky and Shatsk was appointed rector of the Moscow Theological Academy.

– Metropolitan of Rostov and Novocherkassk Mercury has been appointed General Director of the Sofrino Art Production Enterprise.

– Archpriest Dimitry Smirnov, known for his resonant statements, left the post of the chairman of the patriarchal commission on family issues, protection of motherhood and childhood, at his request due to health issues.