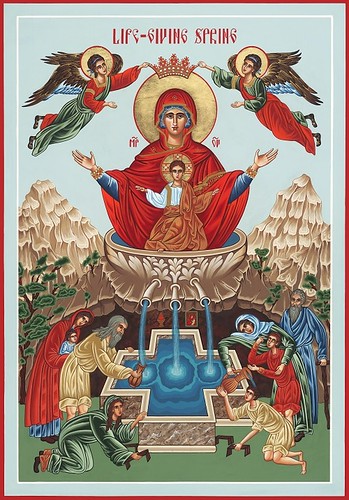 The feast of the Life-giving Spring has its origins in the fifth century. It commemorates the consecration of the Church built next to it outside of Constantinople.

The very large and beautiful church named in honor of the Theotokos of the Life-giving Spring was built by the Emperor Leo the Great (457-474) in Valouki, west of Constantinople (now Balıklı, Istanbul). Emperor Leo (January 20), before his ascension to the throne, had encountered a blind man, who being tormented with thirst asked him to help him find water. Leo felt compassion for him and went in search of a source of water, but found none. Leo then heard a voice that called him “Emperor” and told him that he would find muddy water in the densely wooded place nearby; he was to take some water and anoint the blind man’s eyes with it. When he had done this, the blind man received his sight.

Emperor Leo raised up a church temple over the spring, whose waters worked many healings, as well as resurrections from the dead, through the intercessions of the Theotokos who brought forth life: her son and our God, Jesus Christ. From this, it came to be called the “Life-giving Spring.”

Emperor Justinian the Great (527-565) was also cured by the waters of “The Life-giving Spring” and in gratitude built a new church temple, larger than the first. It was destroyed by earthquakes but rebuilt by Justinian’s successors. 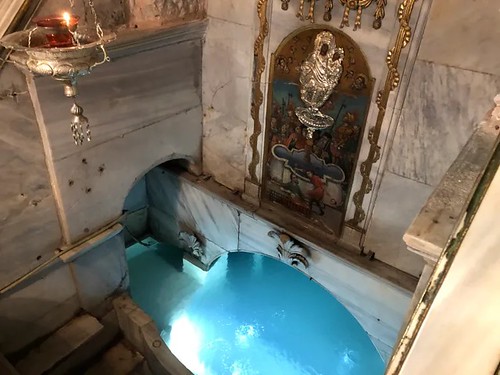 After the fall of Constantinople to the Turks in 1453, this church temple was razed to the ground and the materials from it were used for building the mosque of Sultan Beyazıt. Nothing remained of that church’s ancient beauty, except for a small chapel, almost completely buried in the ruins. This chapel had twenty-five steps going down into it, and a transom window on the roof, from which it received a little light. Toward the western side of the chapel was the holy spring, fenced about with a railing.

In 1821, at the start of Greek independence form the Turks, even that little remnant was destroyed. The sacred spring was buried with it and disappeared altogether. But in the days of Sultan Mahmud, when those subject to him were rejoicing in their freedom to practice their religion, permission was gained by the Orthodox Christian community to rebuild at least the chapel. It was consecrated on Bright Friday in 1835. But on the night of September 6-7, 1955, it — along with 73 other Orthodox churches in Istanbul — was desecrated and burned to the ground by the Turks. The church has been restored yet once again, but not anywhere its former magnificence.

Most-holy Theotokos of the Life-giving Spring: save us! 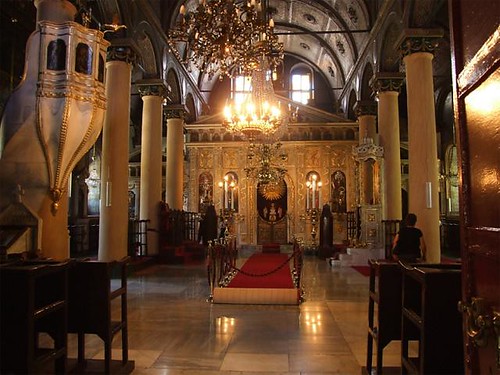 (The Church of the Life-giving Spring near Istanbul, Turkey, modern day)

A life-giving fount, thou didst conceive the Dew * that is transcendent in essence, O Virgin Maid, * and thou hast welled for our sakes the nectar of joy eternal, * which doth pour forth from thy fount * with the water that springeth up * unto everlasting life * in unending and mighty streams; * wherein, taking delight, we all cry out: Rejoice, O thou Spring of life for all men.

Kontakion: Plagal of Fourth Tone, To thee, the Champion Leader

From thine unfailing fount, O Maid supremely graced of God, * thou dost reward me by the flow of the unending streams * of thy grace that doth surpass human understanding. * And since thou didst bear the Word incomprehensibly, * I entreat thee to refresh me with thy grace divine,* that I may cry to thee:* Rejoice, O Water of salvation.