After my surgery, Fr. Theophylact came and anointed me with oil from Saint Nectarlos. He left and suddenly, inexplicably, I was overcome by a profound feeling of repentance. I wept and wept. Then I began reading a book that Fr. Theophylact had brought with him: Saint Elisabeth the New Martyr by Ludmila Koehler. I was never a reader, but this book captivated me. I felt a special closeness to the martyred Grand Duchess, and I was moved to tears by her life.
Elisabeth Hawkins | 18 July 2011 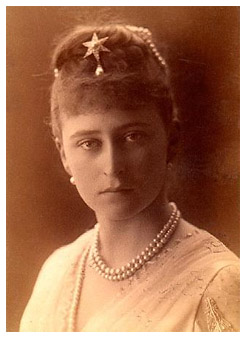 I want to share how Grand Duchess Elizabeth has helped me in guiding me to Orthodoxy and strengthening my faith.

As a divorced single mother, I was living with my eight-year-old son Timothy near Albany, New York. My older brother bad become a monk at Holy Trinity Monastery, in Jordanville, and came occasionally to visit ns. He would talk to me about his Orthodox faith, and I would appear to listen, but I was not interested and therefore I did not really hear what he said. A turning point came in April 1989. Fr. Theophylact came to visit us one evening, and after he left I began wondering if there was some truth in what he was saying.

For many years I had been searching for a church where I felt I belonged. We had been raised Baptist and Lutheran, and I had been baptized at the age of nineteen in the Lutheran church. But I felt something was missing, and over the years I also attended Methodist, Dutch Reformed and Roman Catholic churches. I had recently become a member of a Presbyterian church, although there, too, I was not really satisfied, and I continued to pray that God would lead me to a church where I would not feel such emptiness.

It was soon after Fr Theophylact’s April visit that I learned I had a growth on my thyroid. The doctors thought it was cancerous, and I was frightened. I had always been very athletic and in good physical shape, and suddenly I was faced with cancer. This no doubt intensified my desire to find the “right Church,” and in July, I finally responded to Fr. Theophylact’s  invitation to visit the monastery, it made a great impression — not only on me but also on Timothy. My brother gave us a tour, and we even attended a funeral. For the first time I really opened up to what he had to say and asked questions.

Early in August I drove again to the monastery and attended my first Divine Liturgy. It was a deeply moving experience. In spite of my worries about cancer, I felt very peaceful. Later that month, I was to have surgery to remove the growth on my thyroid. Fr. Theophylact requested one of the hieremonks to serve a moleben for me, which was done before the icon “Unexpected Joy,” and the tumor turned out to be benign. I firmly believe this was a miracle.

After my surgery, Fr. Theophylact came and anointed me with oil from Saint Nectarlos. He left and suddenly, inexplicably, I was overcome by a profound feeling of repentance. I wept and wept. Then I began reading a book that Fr. Theophylact had brought with him: Saint Elisabeth the New Martyr by Ludmila Koehler. I was never a reader, but this book captivated me. I felt a special closeness to the martyred Grand Duchess, and I was moved to tears by her life.

Shortly afterwards, on one of our trips to Jordanville, Timothy and I visited the nearby sisterhood, which is dedicated to Saint Elizabeth. There I experienced such peace and contentment. I scarcely noticed the two-hour drive home in the pouring rain. 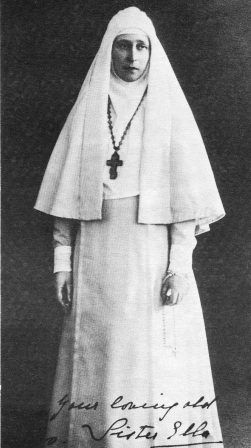 That evening I framed the photo of Saint Elizabeth that one of the sisters had given me, and put it on my bedside table, I awoke that night to see light coming from the photo. The Grand Duchess had a white rope in her hand and held it out towards me. A feeling of peace enveloped me. After years of searching, I knew that I was on the right path.

In November of that year, Timothy and I became catechumens. Every weekend we drove to the monastery, to attend the Divine services. We were baptized on April 7, 1990, Lazarus Saturday, which coincided that year with the feast of the Annunciation. I took the name Elizabeth after the martyred Grand Duchess. Never had 1 experienced such inner joy and happiness. That night I awoke to see Saint Elizabeth, dressed in black monastic attire, kneeling at my bedside and praying.

Timothy and I continued our weekend trips to the monastery until, in July, we were able to move to Jordanville. By the prayers of Saint Elizabeth, we were permitted to stay at the sisterhood. This was a great blessing, because I soon became quite ill. After four days in the hospital and numerous tests, the doctors were still unsure as to what was causing me such pain.  Only the following March did they finally determine that I had endometdosis. With my health problems compounded by financial insecurity, I am sure I would have become depressed had I not had the support of the sisters. We continued to live at the sisterhood until August, when we moved into our own apartment in Richfield Springs, only seven miles from the monastery.

As if all this were not blessing enough, in September 1993, an older woman asked my godmother (one of the nuns from the Saint Elizabeth sisterhood) and me to accompany her to Russia — and paid for our travel expenses. While in Moscow we stayed at the Martha-Mary Convent, founded by Saint Elizabeth, and were there for her name day, September 5/ 18. The convent buildings were in crying need of repair, but one could nevertheless strongly sense the Grand Duchess’s presence. The white roses she planted were still flourishing, and I was privileged to play her piano.

I am so unworthy of all that has happened, and I give all honor and praise to God and thankfulness to Saint Elizabeth for her faithful intercession. I hope that those who read this and who are not yet well acquainted with Saint Elizabeth will want to read about her inspiring life. There are two biographies available in English: Ludmila Koehler’s book, which has already been mentioned, and Grand Duchess Elizabeth of Russia: New Martyr of the Communist Yoke by Lubov Millar. Her life was devoted to helping people, and she continues to help people even now, as I myself can testify.