Source: Greek Reporter
Ioanna Zikakou | 10 January 2015
World-famous architect Santiago Calatrava has undertaken the task of rebuilding the Greek Orthodox Church of St. Nicholas that was destroyed during the 9/11 attack at the World Trade Center in Manhattan, New York. 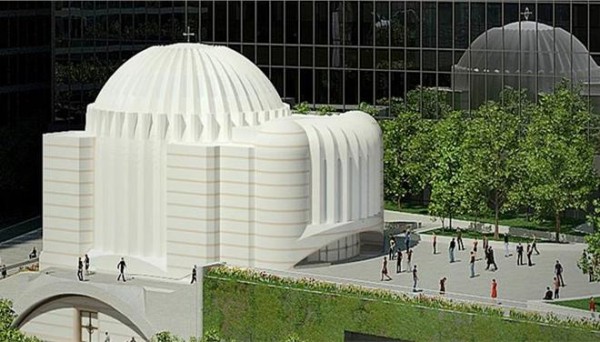 “I was trying to do a building that was modern, reflecting the tradition of Orthodoxy,” said Calatrava to BBC, adding that he was building a church, not just for the Greek Orthodox community but for everyone. “A church should be open 24 hours a day,” he said.

Furthermore, Calatrava also noted that he studied Hagia Sophia in Istanbul and focused on a mosaic, in which Justinian presents the church’s model.

The original church of St. Nicholas was a small building that stood in front of the twin towers. The new church will also be small, made with stones from Vermont, while at night, the dome will be illuminated from within. “The idea I had in my mind was of a small church,” said Calatrava, stressing that it is not the money that will make the church better, but the place and its significance.

According to BBC, after 13 years of negotiations with the local Port Authority, the construction of the church began last month. St. Nicholas’ church will be the only place of worship located on Ground Zero, therefore people believe that it will be one of the most popular churches in the U.S. The project is scheduled to be completed by Easter 2017.