Ground Blessing for Saint Nicholas at WTC, a place of prayer and peace, a place of hope and love

Source: Greek Orthodox Archdiocese of America
Natalya Mihailova | 20 October 2014
NEW YORK – More than 2,000 people gathered yesterday Oct. 18, 2014 at 130 Liberty Street, the new site for Saint Nicholas National Shrine at the World Trade Center, for the historic event of the Blessing of the Ground and the symbolic “laying of the corner stone.” 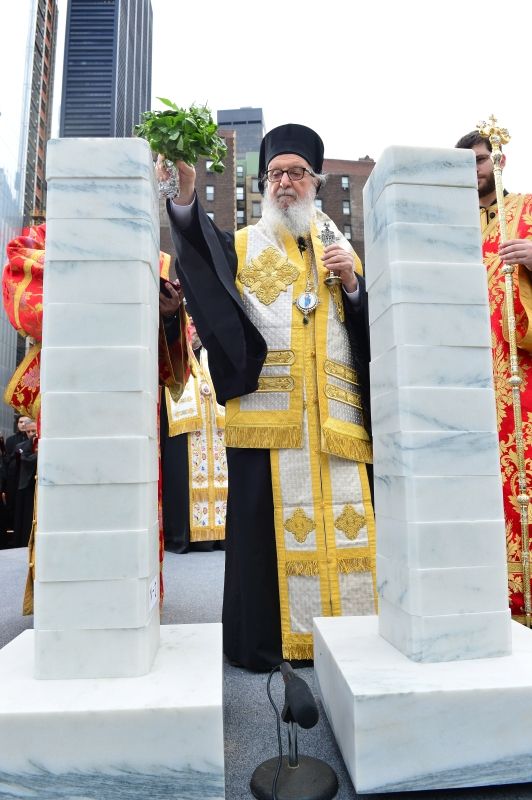 The small and humble church of Saint Nicholas was the only house of worship destroyed in the terrorist attacks on September 11, 2001. The new Greek Orthodox Saint Nicholas National Shrine Church, designed by world-renowned Architect Santiago Calatrava, is expected to begin construction this year and to be completed within 24 months.

His Eminence Archbishop Demetrios of America presided at the agiasmos service, the sanctification of water and the blessing of the foundation for the new church.

Family members of victims of 9/11 carried vessels of water from the two memorial pools, which now occupy the footprints of the fallen twin towers. The Metropolitans of the Holy Eparchial Synod, concelebrating the service, received the water and poured it into the crystal fount used for the sanctification of the water.

Following the Agiasmos and as a symbolic act of “laying of the corner stone” for the new church, two Cairns (a memorial collection of stones) were built, with a total of 12 white marble stones each, layed down by donors and benefactors, community and institutional representatives and public officials. Archbishop Demetrios blessed with sanctified water the two Cairns, which will eventually be incorporated into the new church.

“What we establish today will be a house of prayer and a place of peace, a place of hope and a place of love,” said Archbishop Demetrios in his remarks following the service. His Eminence recounted in brief the long road traveled in the last 13 years, he recognized the contributions and efforts of many individuals and in particular the “decisive action of Governor Andrew Cuomo.” 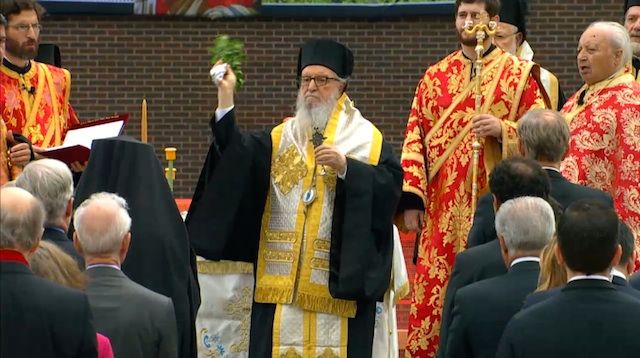 Several officials delivered remarks. Former Governor of New York George Pataki spoke of his resolute commitment from the start to the rebuilding of Saint Nicholas. Architect Santiago Calatrava said that in his design for the new church edifice, his inspiration came from Hagia Sophia, in Constantinople. Senator Charles Schumer said that this day “is a testament to the courage of our spirit.” Patrick Foye, Executive Director of the Port Authority of New York and New Jersey, spoke of the resolve of two men, the Archbishop and the Governor that led to this day of celebration. Metropolitan Methodios of Boston read a letter from His All Holiness Ecumenical Patriarch Bartholomew.

Concelebrating the ground blessing service with Archbishop Demetrios were Metropolitans Iakovos of Chicago, Methodios of Boston, Alexios of Atlanta, Nicholas of Detroit, Savas of Pittsburgh, Gerasimos of San Francisco and Evangelos of New Jersey. Assisting the Hierarchs were Frs John Touloumes and John Romas, Archdeacon Panteleimon Papadopoulos and Deacon Eleftherios Constantine. Also present at the ceremony were the Chancellor of the Archdiocese Bishop Andonios of Phasiane and the Chief Secretary of the Synod Bishop Sevastianos of Zela.

The service concluded with a moment of silence remembering the victims who perished in the tragic attacks on September 11. The program and the speakers were presented by Anthoula Katsimatides. The Archdiocesan Byzantine Choir chanted the service hymns. Georgia Linaris sang the concluding patriotic song “God Bless America.”

Once rebuilt, the National Shrine will include a 2nd floor non-denominational bereavement center welcoming all those seeking comfort and prayer and a place of solace. For more information about Saint Nicholas National Shrine, or to make a donation, please visit: http://www.stnicholaswtc.org/