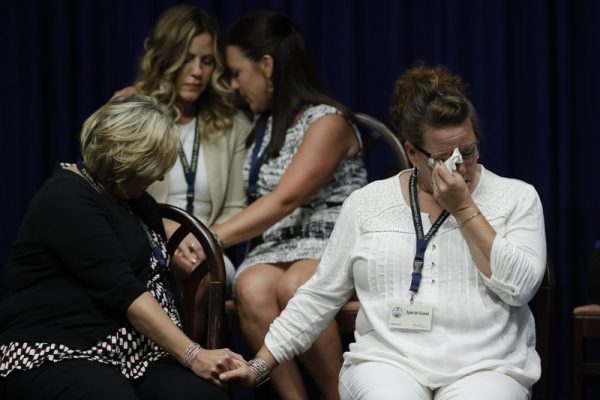 Victims who listened in to the findings of the report wept as they were handed down. (AP)

Thousands of children were molested by hundreds of “predator” priests in Pennsylvania over 70 years while senior Catholic church officials and the Vatican took part in a “systematic” cover-up, according to a landmark report.

It identified 301 clergymen and 1,000 victims but added that the “real number” of abused children might be “in the thousands” as records had been lost and some victims were too afraid to come forward.

Publication of the 884-page report followed a two-year investigation into abuses in six dioceses in Pennsylvania and victims wept as details were revealed at a press conference.

Josh Shapiro, the state’s attorney general, said it was the most comprehensive report on Catholic clergy sex abuse in American history.

It came nearly two decades after the church was rocked by revelations of widespread abuse and a cover-up in Boston.

Most viewed articles
Open Doors warns of rapidly growing threat of digital persecution against Christians109
Saved? Not Yet98
Focusing On God Instead Of Ourselves82
Assembly of Bishops Announces Peace of Mind, a Training Program in Mental Health First Aid65
Metropolitan Anthony of Volokolamsk Makes a Working Visit to Paris64
Finding God Amidst the Noise42
Bishop Irenei of London and Western Europe visits the Memorial Church of St Job and the Church of the Resurrection of Christ in Brussels25
Most popular authors
Pravmir.com team154
Tola Mbakwe109
Archpriest Basil Ross Aden97
Fr. James Guirguis82
Archpriest Stephen Freeman40