Source: The Arab Daily News
It was simply a most glorious celebration of the Epiphany on the Jordan River today according to the Old Julian calendar.
Maria C. Khoury, Ed. D. | 19 January 2015 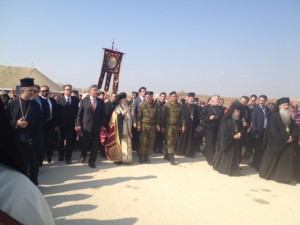 There were hundreds of priests, nuns and thousands of people from all walks of life coming to the precious site where over 2,000 years ago “…the heavens were opened unto Him, and He saw the Spirit of God descending like a dove, and lighting upon Him…” (Matthew 3:13-17)  It was so wonderful to see many local people in addition to internationals for this grand celebration.

His Beatitude Patriarch Theophilos III, blessed the waters after the scouts marched from the old abandoned monastery of St. John to the edge of the Jordan which is like six long blocks of an amazing parade starting approximately 11:30 am.  Faithful people were standing on both the east and the west side of the Jordan River; the Jordanian side and the Palestinian side which is under Israeli military control.  All of the Israeli flags were prominently flying high and even on top of the icons and of course hundreds of Israeli soldiers and police everywhere. But in the last ten years, at least Israel has opened this area for daily visits where before 2000 it was forbidden to come except this one time of year with the patriarch celebrating the Holy Theophany.

The Jordan River is not very wide at all so you can actually shout and they can hear you on the other side.  I simply thought it was a miracle that I marched to the beat of the drums, stood next to His Beatitude and was able to pray on this beautiful sunny day in such a sacred holy place. The Gospel was only read in Greek and Arabic but I know it by heart in English so it was ok with me.  Of course it is still very popular for pilgrims to immerse themselves in the Jordan River in a small designated area wearing a white robe available at the local gift shop in case one decides the last minute to go into the river.

However, the water is not very clean but many people still take some water with them because there is simply not enough holy water left from the official service for the thousands of people attending.  So that was the small disappointment that the holy water shortage is a reflection of our daily reality with our water issues.   However, it is so important to take the grace of God with us from such a sacred holy place and taking the water allows us to be in the presence of God. It reminds us that we are not of this world but we are part of God’s Heavenly Kingdom and as a small Christian community from the Holy Land we have a huge powerful message for the world.

The baptismal area by the Jordan River has really developed into a pilgrim’s destination especially in the last ten years and at least three new gorgeous churches have been built on the Jordanian side.  One of the churches is especially shinning up the area with its amazing golden dome. Glory be to God for all things!

“You appeared to the world today, and Your light, O Lord, has left its mark upon us. With fuller understanding we sing to You, “You came, O unapproachable Light, and made yourself known to us!”  (Hymn on the Feast of Epiphany)