Source: Sputnik
In the tradition of the Orthodox Church, January 19 is the date of Epiphany, the day when Jesus Christ was baptized in the River Jordan. To mark this day, hundreds of thousands of people across Russia plunged into freezing waters on Sunday night.
Natalya Mihailova | 21 January 2015 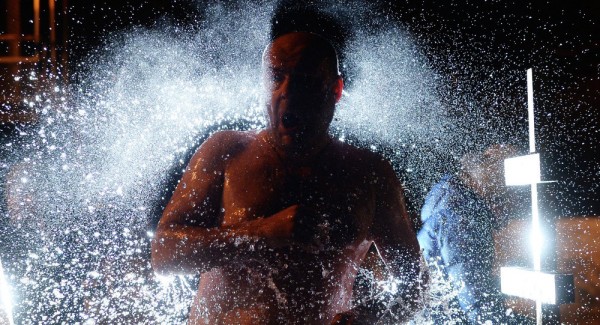 MOSCOW, January 19 (Sputnik) – Hundreds of thousands of Christians across Russia marked the Orthodox Epiphany, immersing themselves into freezing waters on a cold January night on Sunday.

January 19 is the date of Epiphany in the tradition of the Orthodox Church. According to the belief, it was the day when Jesus Christ was baptized in the Jordan River and Orthodox Christians have been marking the occasion by jumping into frozen rivers or ponds.

More than 150,000 Muscovites took part in the tradition this year. Russia’s capital aims to offer the best conditions for believers by constructing specifically-designed areas for plunging. A total of 60 ice-dipping spots were built across Moscow, with medical personnel and volunteers present and ready to provide assistance at all specifically designated areas for the cold plunge, RT reports.

For those who truly believe in the holy powers of healing and blessing of the water on the day of Epiphany even extremely low temperatures in the Arctic Siberia didn’t stop them from making the plunge. With the temperatures being below —40C degrees in Norisk, one of Russia’s most northern cities, hundreds of people showed up to test their faith, Norisk TV reports.

In Vorkuta, situated north of the Arctic Circle, where visibility was less than ten meters because of freezing fog, hundreds of people lined up for the plunge. As they walked out of the ice-hole, which was cut out on the frozen Usa River, water droplets turned into ice a split second after reaching the ground.

Prior to Epiphany, the Orthodox Church held a series of religious services that conclude with a blessing of the water. Those who did not jump into the icy waters have an opportunity to take the blessed water home with them.