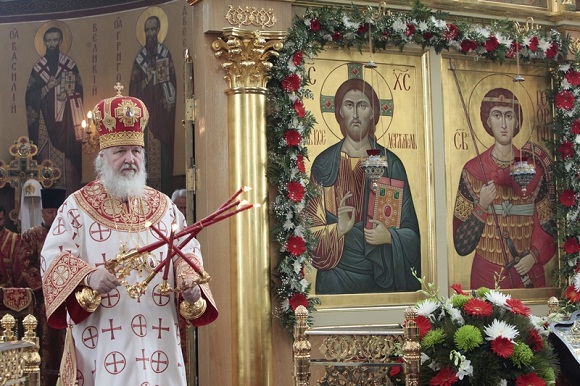 Today is an altogether special day on our church calendar. We celebrate the memory of the Holy Great-Martyr and Trophy-Bearer George, the wondrous God-pleaser, who during times of pagan persecution in the Roman Empire gave his life in martyrdom for fidelity to the Lord. The Lord granted him enormous power, for God grants power to people for their fidelity and faith.

It is no accident whatsoever that the holy martyrs became symbols of victory in war: the Holy Great-Martyr George, the Great-Martyr Theodore Stratelates, and many others, because the same thing is required of warriors as of martyrs: faith and fidelity. Faith in God and faith that a warrior is doing the right thing; both this faith and this conviction in the rightness of his cause should accompany fidelity even unto death. It is no accident that the Great Patriotic War [WWII] ended on the day of the Holy Great-Martyr George the Trophy-Bearer. We celebrate Victory Day on the anniversary of the signing of capitulation, which took place in Berlin on May 8 (because of the time difference in Moscow, the time of capitulation was after midnight, for which reason Victory Day is marked on May 9). But the war ended on May 6, on the day of the Great-Martyr and Trophy-Bearer George, who has always been the patron saint of the city of Moscow.

This is not simply a coincidence or turn of events. The war began on the Sunday of All Saints of Russia. Those who conspired to step foot onto our sacred land on June 22, 1941, did not know our church calendar. On the day when all our faithful people were appealing to God, asking mercy of the Holy God-pleasers who had shown forth in our land – it was on this very day, as a great sacrilege and mockery of people’s spiritual life, that bombs began to rain down on the heads of our people.

There were probably people, as always, who said: “How can this be? On such a holy day! Where are God’s saints? Why didn’t they defend our land? Why have bombs fallen on us?” This is how we normally react to things we do not understand. Much happens in our life that we cannot make out and understand. When something happens that does not correspond to our expectations, we turn to God in confusion: “Lord, where are You?” Some in bewilderment, some with grumbling, and some with derision: “Where are You?”

Celebrating Victory on the day of the Holy Great-Martyr George the Trophy-Bearer, when the way ended, was a response to those who wondered why the enemy attacked us on Sunday, June 22. It was not just the government, which was then the Soviet Union, that the enemy was challenging. For when the lives of millions of people are concerned, it is about much more than the government. It concerns something of colossal value in God’s eyes: the life of the people, faith, holiness, purity, and how we stand before the face of God. A terrible challenge was mounted to all this, and we know how dear our victory cost us.

I gave my blessing, beginning this year, for a moleben [supplicatory service] to be solemnly celebrated in all Russian Orthodox churches on Victory Day in memory of our country’s deliverance from its terrible, mortal enemy and from a danger the likes of which our Fatherland had never known in all its history. While working on the text of the prayer that will be read in our churches, I used a prayer of St. Philaret (Drozdov) of Moscow as its basis. The saint composed this prayer in connection with the victory over Napoleon, but deemed it could profitably be read every time our country celebrated victory in war.

Of course, St. Philaret’s prayer did not literally correspond to our Victory and our times throughout, so parts had to be edited. But, working on this text, I entered into the meaning of the saint’s prayer. Orthodox Russia and Napoleon’s invasion: How should all this have been reflected in people’s minds back then? As a kind of attack? As a demonic temptation? As enemy intrigues? As the intricacies of politics? But in the mind of St. Philaret and of the entire Church, which later prayed in his words, this attack was perceived as a punishment for sin.

A year ago I said in this church that the Great Patriotic War was a punishment for our sin. I was later surprised by the reaction of the secular press, which was surprised and even offended. No need to take offence – no need to sin. No single sin passes God by. Everything that we perform in our personal, social, and governmental life is recorded in the Divine book of life. The Lord, in His mercy, not desiring our eternal torment, leads us through these times of tribulation, which we should regard as a gift of Divine justice and love – not murmuring, but calling upon God’s name, bowing our heads before God in repentance and faith.

And what in return? In return, the Lord performs miracles, as He performed the miracle of Moscow’s deliverance, as He performed the miracle of the salvation of our country and of all Europe. A sign of this miracle was the end of hostilities on the feast day of the Holy Great-Martyr and Trophy-Bearer George according to our Julian ecclesiastical calendar. This is also a sign of the special role played by our country and people in that great and sacred Victory.

The heart rejoices that today, over the expanses of historical Rus’, a revival of faith is underway. And no matter how much those who find this revival unpleasant may vituperate, it is taking place not because anyone ordered people to revive their faith, nor because someone from above pointed out where to go, but because our people, having lived through all this pain and suffering, understood – as perhaps no other people – the great truth that one must live with God and according to God’s law.

This is just what we pray for today: that our people’s faith may be strong, so that we can cope with our difficulties in life as well as our ancestors coped with mortal danger; that the Lord would grant us a portion of the fidelity and faith possessed by the Holy Great-Martyr George the Trophy-Bearer and the holy martyrs, who became symbols of Victory – the Victory that was accomplished by God’s will.

Only thus should we regard our Victory. If we forget the spiritual and religious dimension of Victory, this will be blasphemy against God. In return for our incredible effort, in return for the supreme heroism of our people, in return for our all-out efforts, the Lord granted Victory and we received deliverance from His saving right hand. Therefore we offer up prayers of thanksgiving, especially today, for our country, our people, and the first-throned city of Moscow.

Delivered on May 6, 2010, in the St. George Memorial Church, dedicated to Victory in the Great Patriotic War, on Poklonnaya Hill in Moscow. 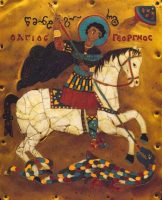 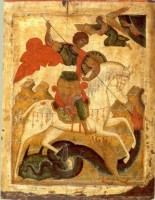