Sergey Stepashin, head of Russia’s Account Chamber, was on a working visit to Palestine from March 13-15, 2013, in his capacity as chairman of the Imperial Orthodox Palestinian Society. 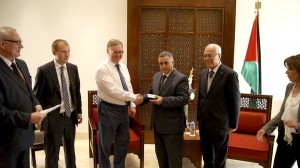 Among the important parts of his visit was the laying of foundation stone for a new comprehensive school in Bethlehem, in which the Russian language will be taught. Present at the ceremony were Palestine’s education minister Lamis al-Alami and Bethlehem city officials. The ceremony was also attended by Daud Matar accredited representative of the Society in Palestine and members of the Society’s branch in Bethlehem.

Speaking at the ceremony, Mr. Stepashin said that it will be the first school to be built by Russia in the Holy Land since 1917.  Before October 1917, Russia organized over one hundred educational institutions in Palestine. ‘The construction of this school will become a symbol of the return of our historical traditions and another page in the restoration of religious and cultural ties between Russia and Palestine’, he said.

Later that day, Mr. Stepashin met with the general secretary of the Presidency of the State of Palestine, Tajib Abderrahim, to sign a cooperation agreement between the Society and the Palestinian-Russian Friendship Society.

The day was concluded with a visit to the Basilica of the Nativity of Christ in Bethlehem to venerate the place where our Saviour was born.

In the evening of March 14, a reception took place at the Russian Cultural Center in Bethlehem. Among the guests were representatives of the Russian embassy, the Society’s representatives in Israel and Palestine, and Archimandrite Isidore (Minaev), head of the Russian Ecclesiastical Mission in Jerusalem. Mr. Stepashin awarded Father Isidore the Society’s Medal of Archimandrite Antonin (Kapustin) and Father Antony (Gutnik), the secretary of the mission, the Medal of Vasily N. Khitrovo, the website of the Russian Ecclesiastical Mission in Jerusalem reports.