Source: Orthodox Life (Russian)
We can’t say that the topic of children in a church is new or unusual.
Archpriest Vladimir Puchkov | 07 February 2020 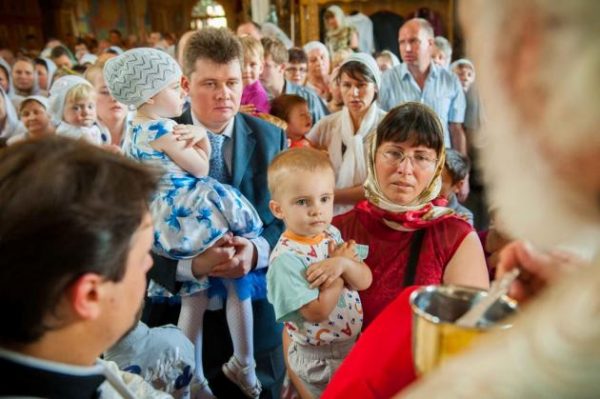 It is usually written mainly on church bulletin boards and in parish leaflets and it’s always the same: children in the church should not interfere with praying. In other words, they should act in church like adults. Moreover, based on how long and regularly such instructions are printed, it is easy to assume that their authors have no doubt in their own right. That is, they have seen somewhere or at least do not doubt the existence of children who are able to spend one and a half or two hours in peace and stillness.

But I doubt that such children exist in nature. I doubt that children, even noisy in the church, can interfere with prayer. And finally, I doubt that a service-educational drill is necessary and efficient.

Let’s start with the obvious: a child is not an adult. It is common for a child to be fidgety, play pranks, poke his nose in all corners, and turn even the most serious things into a game. A child by his nature is not capable of behaving in an adult way. And forcing him, for example, to sit quietly at a divine service if he has too much energy is either impossible at all, or possible by means of high pressure on his psyche. Therefore, the first thing I would like to wish church parents is the following: when you educate your child in the faith, do not deprive him of his childhood. A child has the right to be a child. At home, on a walk, in kindergarten, in church – everywhere. This is a natural state of things. It is useless to fight with natural things. And is it really necessary?

“But how else?” you ask me. After all, noisy children walking around interfere with praying! But then I will have a question, too: what kind of prayer do we have that it is so easy to interfere with? We live in turmoil all our lives, working, spinning, rushing around. We live in the bustle, and let the bustle live in us. Once or twice a week we run away from the hustle and bustle to a church and what then? We cannot concentrate on God for one and a half or two hours, devote all attention to Him, stop ceasing to notice anything other than Him. After all, each of us should follow the commandment and love God “with all our hearts, with all our souls, and with all our minds”. And suddenly, a child’s babble is hindering our prayer… I know, you may certainly object to me that the saints prayed in such a way that nothing could stop them, and we are just imperfect, weak, sinful people. But, I say, how can you learn to pray carefully without forcing yourself, without working in order not to be distracted, not to pay attention to anything outside? Besides, if only it was the children who distracted the worshipers! In each of our churches, there are a dozen zealots of different ages who will eagerly make a comment, give advice and reprimand on occasion. And they will do all this, of course, not in a whisper and not even in an undertone. Let’s remember what they usually answer to those who complain about elderly women in a church: “Where is your humility?” “For Christ’s sake you cannot bear a minute!” “You wear hardships of each other”, “they act from good intentions”, “do not condemn the zealots”… Moreover, such things are said mainly by those who are disturbed by children in a church. So what is it? Elderly women are allowed to do it, but children are not? When those who are quite able to stand quietly and silently, who control themselves and are fully responsible for their actions, who distract others not from misunderstanding, but from boredom, discontent, or even anger, it’s nothing. But as soon as a child lifts up his voice, they will immediately hush at his mother. By the way, don’t people shouting at children and their parents during the service distract you from praying? 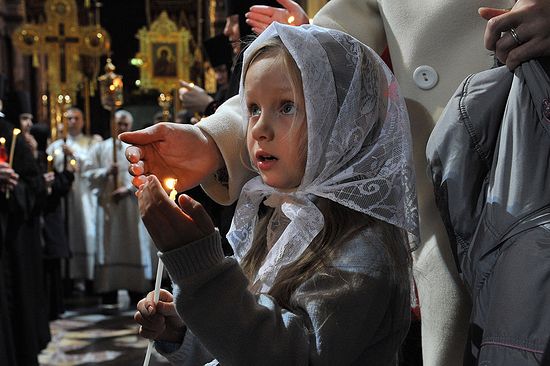 “But is it possible,” you say, “to do something? Anyway, it is not normal that a child is making noise in the church.” No, it is not. And the unreasonable eagerness of mothers, who, having crossed the threshold of the church, completely forget that they came with a child and are in a hurry to immerse themselves in prayer, while the child is left to his own devices, deserves only censure. And, I agree, something really needs to be done with this. But here’s the trouble: some unlucky, but “very churchly” parents sometimes do something just the way they shouldn’t. They begin, for example, to openly drill a three or a four-year-old baby, demanding that he be quiet in the church. They threaten that the priest would be angry with him or even that the Lord would be angry. They punish him for noise in the church, for talking or playing with other children. They instill complexes and guilt in the child: “Other children pray, and you don’t”, “You don’t want God to punish your mother because of you”… And then, when the child grows up, the parents cry that they went to church every Sunday, visited holy places, and even went to elder N together, and now he never crosses the threshold of the Church, and doesn’t want to hear about confession. But what did you want, my dear? At the cost of tremendous efforts, you have achieved the fact that from early childhood this person associates the Church with parental discontent, pressure and coercion. What church life do you expect from him? 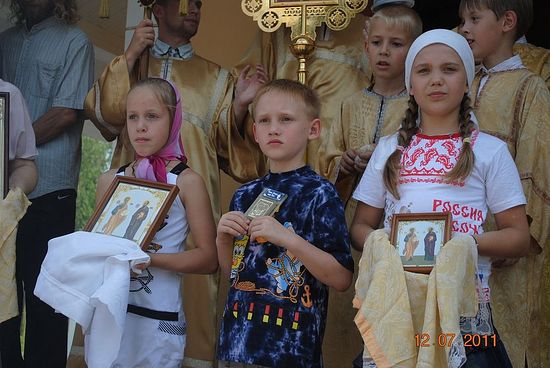 You ask, what should be done then? We should act wisely, with love and moderation.

First of all, there is no need, unless necessary, to take a small child to the whole service. At first, you can come with him specifically to the time of communion, increasing the time the baby stays in the church as he adapts. A growing child does not need to be loaded with an adult prayer rule, a long preparation for communion and a full fast. It is quite enough to have 5-10 minutes of prayer in the morning and before bedtime, to refuse of meat by fasting in adolescence and to read 3-4 prayers from the “Following to the Holy Communion”. You need to talk with the child about the behavior in the church not during the service or after it, but at home, in a relaxed atmosphere and in a calm voice. You should not frighten the child. It is not God who punishes the sinner. Each of us has become so proficient, chastising ourselves that God simply does not need to send heavenly punishment on us, even if He wanted to. But he doesn’t want to! And this is exactly what needs to be conveyed to the child. God is not a formidable king and not a merciless judge. He is not an angry kindergarten teacher, taking out anger on a child for their own unhappy life. He is the Father, so to speak, the most important Father in the world, infinitely loving His sinful, weak, stupid children. And if the parents failed to form precisely such a perception of God in the child, then it is not the child’s behavior problems, but the parents’ worldview problems. You cannot demand seriousness in the church from a baby. If he has been calm and quiet for twenty minutes, this is already a reason for praise and joy. And then he took communion, washed down, and went to play with other children in the yard. There is nothing reprehensible in this. Children should feel good in the church: praying and communicating, standing at the service with their parents and running around the building with other children. Do not forget about the personal example of parents. A child will not learn how to pray sincerely, if his father and mother are Christians only on Sunday mornings, if they spend time from morning to evening rule in sorting out relationships, and skillfully combine fasting with gossip, scandal and slander. He will go to church, stand at services, readily confess and take communion, but with the same readiness, having matured, he will leave the Church and never return to it again. Only a person who has reverence for worship, the sanctuary of family relationships, and the image of God in his neighbor can raise reverence for the church, prayer, and Sacraments in his child.

And if your child happens to break the church silence, do not rush to show discontent, do not get annoyed, do not punish for show. Calm down your child, hold him in your arms or let him stand near you. If necessary, leave the church with him and wait until he settles down. And do not pay attention on the discontented, rushing to make a comment or give advice on education! In the end, children do not make noise only in those churches where there are no children at all. And if there are no children in the parish, does it have a future?

Our time is interesting and unusual in many aspects. For example, a modern practicing Christian is much less…