Children with Special Needs and the Orthodox Christian Family

The initial response of parents and the broader community to a child with birth defects is guilt and embarrassment. Unthinkingly, we ask the question which the disciples asked of Jesus: who sinned – this man or his parents? We immediately seek to place the blame somewhere. We feel that this is too terrible a tragedy for someone not to be responsible. But to this question and to all questions like it, must be given Jesus’ answer – no one sinned, neither the child nor its parents. No one is “responsible.”
| 24 August 2009

As he went along, he saw a man who had been blind from birth.  His disciples asked him, “Rabbi, who sinned, this man or his parents, for him to have been born blind?”  Jesus answered: “Neither this man nor his parents sinned; he was born blind so that the works of God might be displayed in him.”

We must learn the discipline of silence until a compassionate Christian response is possible in our part.

There is perhaps no event more devastating to a family than a child born with a birth defect.  There is no more severe test of a family’s resiliency than the discovery that a child is slowly dying of an incurable disease.  Each child and every family is unique, bringing his own life story into the tragedy which each must confront.  What is offered here are some broad outlines, a few insights taken from experience and an expression of concern for these children and their families. 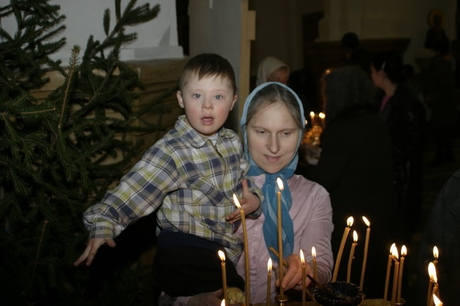 The initial response of parents and the broader community to a child with birth defects is guilt and embarrassment.  Unthinkingly, we ask the question which the disciples asked of Jesus:  who sinned – this man or his parents?  We immediately seek to place the blame somewhere.  We feel that this is too terrible a tragedy for someone not to be responsible.  But to this question and to all questions like it, must be given Jesus’ answer – no one sinned, neither the child nor its parents.  No one is “responsible.”  No mortal can or should take the blame for a child suffering from one of many possible defects.

Most of us have, at one time or another, been exposed to someone who suffers from some physical or mental handicap:  someone confined to a wheelchair, a child who is mentally retarded, or a person who is deaf or mute.  Our initial reaction to this situation is usually a mixture of embarrassment, pity and anxiety – feelings which clash with one another and bind us up, feelings which are nearly always expressed in an inability to reach out to that person and his family.  Instead, we indulge in stereotyped remarks and even make unkind, patronizing comments.  The fact that these comments arise out of anxieties generated in ourselves is no consolation to their vulnerable recipient.  One of the most difficult things for anyone is to deal with conflicting feelings in oneself.  We must learn the discipline of silence until a compassionate, Christian response is possible on our part.

The ways in which parents of children with special needs deal with the tremendous stresses placed upon them vary, depending upon their maturity, the depth of their commitment to their marriage, the presence of other children in the family and their needs, their financial situation and finally, and perhaps more importantly from the perspective of the Church, the social support which can be called upon from the extended family and the community at large.

Children with special needs place a permanent stamp on their families.  The emotional and physical demands which are inevitable in raising such children often lead to fatigue and a sense of inadequacy as a parent.  A crisis of parenthood occurs.  This crisis can be dealt with in two ways – either positively or negatively – depending upon the parents themselves and the quality of support they receive from family, friends and the Church:

1.       Families who have successfully dealt with these problems often express their belief in the value of the experience in setting the family’s priorities in order.

The superficial social life which so many of us indulge in out of habit and the materialistic values endemic to our culture are quickly put in their proper perspective.  There is not doubt that a discerning parish priest and the Church community can play a large role in aiding the development of this essentially Christian awareness.  The family that weathers these storms can, in fact, be stronger than before.

2.       The opposite is also possible:  the trauma of day-to-day care of a child with special needs can accentuate previously present family problems.  The parents’ rejection and/or resentment of the child can become over-whelming, literally tearing the family apart.  Parents can become bitter and blame one another for not shouldering enough of the burden.  One parent can focus all of his attention on the child, forgetting the needs of the spouse and other children.  The additional financial burden, if it is not allayed by community resources, can be a disruptive factor.  The entire family structure may collapse, leading to divorce, abandonment of the child with special needs and severe emotional damage to the other children.

The positive role that the Church can play was made clear to me years ago.

While applying for a job at a state mental hospital in New England, I was interviewed by a young social worker of Greek Orthodox background who suffered from a central nervous system motor disability.  Moving around the room in a motorized wheelchair, her speech slurred but understandable, she spoke movingly of her childhood in a Greek Orthodox community.  One of the things which I retained from our conversation was the fact that despite her obvious difficulty, the people in her parish never treated her as someone “different;” there were never any implications that she was “inferior” or “didn’t belong” with the rest of the children in the parish.  Instead, she told me both she and her family were provided for through a support system of caring and compassionate people.  She is living proof that we, as a community, in the name of Christ Jesus, can make a difference.

The word of the day is “brethren.”  We might have the impression that Paul did not want anything…

UVALDE, Texas (AP) — At least 14 students and one teacher have died in the wake of a…