Did Christ Descend Into Hell?

Source: Holy Nativity Orthodox Church
Archpriest Michael Gillis | 21 April 2017
This morning I responded to an e-mail that asked about Christ's descent into hell. D. wrote me that his non-Orthodox friends thought it made no sense that Christ would enter hell. Below is what I wrote D. 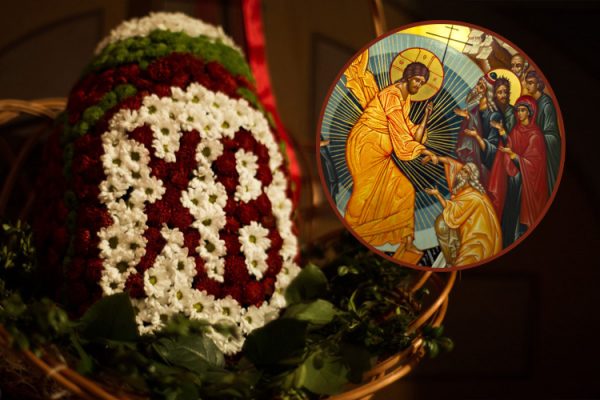 The huge problem here is in defining hell.  In the scripture and throughout church history, the English word hell has been used to translate and describe all sorts of things.  As you probably know, there are at least four different biblical words/concepts that are translated commonly as hell.

Then, if this were not complicated enough, there are the apocalyptic descriptions such as lake of fire, river of fire, and the place of weeping and gnashing of teeth.  As apocalyptic pictures, they are not meant to be taken literally (do we take the four horsemen literally?). Nevertheless, people often use these images to describe “hell”–or use the word hell to refer to these images.
Adding to this are the many Medieval visions (often influenced by European mythologies and Scholastic speculation) of hell.  Examples are Dante’s inferno in the Roman Catholic West and the toll houses in the Orthodox East.
Finally, as materialists–or at least living in a materialist culture–we tend to think of hell and heaven as “places” other than where we are. Heaven and hell in contemporary culture are “places” people “go” when they die. These places are two: heaven were the good go and are happy and maybe rewarded for being good and/or accepting Christ (Armenian), or just being lucky and chosen (Calvin); and hell is where the bad go and suffer and are punished for all the evil things they have done.
So you can see why, for a contemporary non-Orthodox Christian, it makes no sense for Jesus to descend into hell–“Why would he go there? That’s where the bad go to suffer what they deserve.”
However, in the Orthodox Church and in the early church and the scripture, hell was understood as the condition of being dead, or as the dwelling of the dead, synonymous with “the tomb.”  Therefore, in as much as Christ really died, he really entered hell and raised all mankind–which will be manifested in the general resurrection on the Last Day.
As far as suffering and torment are concerned, these are conditions which have nothing to do with a place one goes after he or she dies, but everything to do with an inner disposition of the soul. Just as one need not die before beginning to experience eternal life, so one need not die to begin experiencing eternal torment. Death only brings the experience that we have begun in this life into the next life, which is not a place so much as it is a new condition of existence.
So, D., the problem here is semantic. What is hell?  If hell is the place where bad people go to suffer the punishment they deserve, then certainly it makes no sense for Christ to go there. But such a hell does not exist as far as Orthodox Christians are concerned. Hell for us is the “dwelling” of the dead; so in as much as Christ really died, Christ really entered hell. And, in as much as Christ rose from the dead, all who die and have died are raised: “Do not be amazed at this, because the hour is coming in which all who are in the tombs will hear his voice and will come out, those who have done good to the resurrection of life, but those who have done wicked deeds to the resurrection of condemnation” (John 5: 28, 29).
Tweet
Donate
Share
Since you are here…