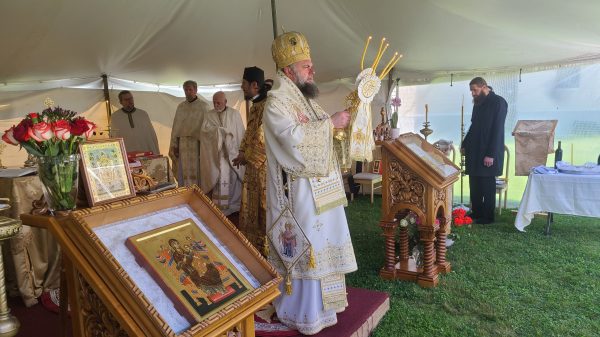 Photo source: Metropolis of the Americas

“Christ, Who has ascended to the heavens and is enthroned at the right hand of the Father, is the foundation of our hope that we also will eventually arrive in the house of the Father,” where Christ Himself awaits us, said the Romanian Orthodox Metropolitan of the Americas on Saturday, at the summer patronal feast of New York’s Middletown Monastery.

“For this reason, when we serve a memorial service or a funeral, we speak about the dead as being asleep in the Lord or reposed in the Lord. They are not condemned to eternal non-existence, as some people say, but they are reposed in the Lord. Christ Himself awaits us so that He might receive us in His Father’s house,” the hierarch further explained.

“Christ, Who is the Son of God come down to earth, passed through death so that He might conquer it, and now at His Ascension, He fulfills this dispensation. He ascends into the bosom of the Holy Trinity, bringing with Him our human flesh, which bears the wounds of His Passion on His palms and His side,” added His Eminence.

“Therefore, we observe how this feast is not just one among many, but truly reveals to us many mysteries: first, that man just like us is at the right hand of the Father; second, that Christ awaits us in His Father’s house; and last but not least, that Christ will send His Holy Spirit Who by enlightening us all, enables us to become proclaimers of the word of the Gospel,” concluded the metropolitan.

His Eminence Nicolae celebrated the Divine Liturgy with other nine clerics at the Middletown Monastery’s summer patronal feast, the Ascension of the Lord”. On the eve of the feast the service of Great Vespers with Litya was officiated.

Metropolitan Nicolae offered all participants copies of an icon painted especially for the Commemorative Year of the Hesychast Saints Symeon the New Theologian, Gregory Palamas and Paisius (Velichkovsky) of Neamț in the Romanian Patriarchate.

The icon depicts the three hesychast saints together with two saints who live in America: St John Maximovitch and St Nikolai Velimirovich.

The church service was followed by a communal agape meal in which many families with children took part.

Churches and monasteries of the Romanian diaspora celebrate the great feasts on weekends to allow participation in the religious services of the faithful coming from great distances.

The main patronal feast of the monastery is “St Demetrius the New” and was built on a plot offered by Romania-born Dumitru Minciu, with a donation from Archim. Vasile Vasilache from “St. Nicholas” Church in New York. Gheorghe and Paraschiva Papa later joined the founders’ list. The church was consecrated on June 5, 2011, and the painting was blessed on October 23, 2016.

In the beginning, in 2006, the monastic community was led for a short time by Archimandrite Clement Haralam, the actual Dean of the Patriarchal Cathedral in Bucharesti, which keeps the holy relics of St. Demetrius the New.

Photo source: Metropolis of the Americas